Salutations from the first country to reach 2011!  Time travel at its best.

I've always liked to "press on a bit" and it was getting to the stage with the Blackbird where true involvement was at speeds which sooner or later were going to cost serious money if I got caught, not to mention the inevitable Disturbance in the Force at home which would follow - I know which would be worse!  I'm going to kick off this post by mentioning  a ride some 18 months ago which will hopefully provide a bit of background to the main point.  Ummm... if there really is a point, that is; other than wanting to scratch a mental itch which has been present for a while!

Going back in time, my attention was caught by a thread on an NZ motorcycle forum by a couple of young Kiwis.  Their plan was to undertake an epic ride, flying to the south island, laying their hands on a couple of small, old 2 strokes and riding them about 2200 km home to Auckland in the north island via a circuitous route, scrounging accommodation along the way.  Who said young people today lack a sense of adventure?  Errr...  I probably did - on numerous occasions!

Anyway, their ride should merit a story here in its own right, with the Suzuki A80 expiring before leaving the south island and the two strapping lads completing the rest of the journey 2-up on an 80's Honda H100S 100cc 2 stroke, complete with a lightly-silenced expansion chamber!  That story can wait though.  When they got near to the Coromandel Peninsula, I met them and rode "shotgun", escorting them home, putting them up overnight; then seeing them safely off the peninsula the next day en route to their Auckland homes.  The following 2 photos show the lads and their wonderful Honda which survived such a prolonged caning whilst grossly overloaded.  Whilst following, the frame flex was so obvious that you could see the wheels moving in and out of alignment! 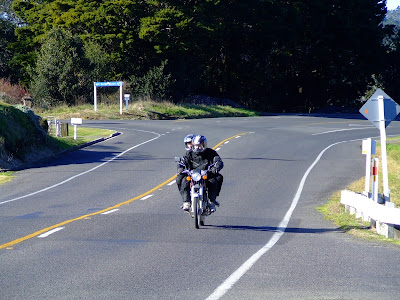 Overloaded Honda H100 - being ridden with verve and imagination 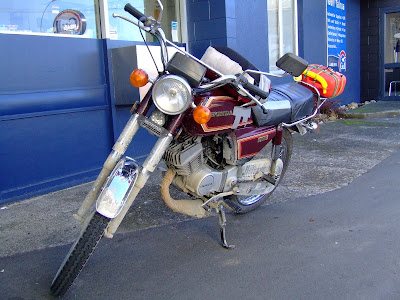 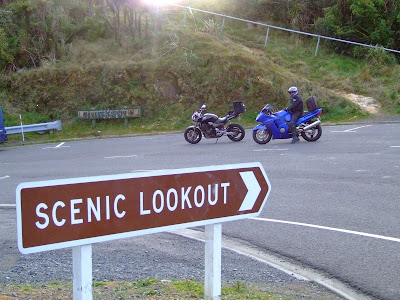 Waiting patiently for the little Honda to climb a steep hill!
Moving ever closer towards the point of this post, whilst I was riding with these 2 lads; they rarely passed 90km/hr, even on a downhill grade with the wind behind them.  This speed was significantly less than my normal rate of open road passage and I was genuinely surprised how much more of the surrounding local countryside I took in and appreciated, as opposed to just the normal mandatory scanning for potential hazards and threats on any ride.
I penned a piece for an NZ bike magazine on "Why we ride" which received some good reviews, so reproduced it in the blog just over 12 months ago: Why do we ride motorcycles? .  Most of the reasons listed still seem perfectly valid but reckon I missed a few.  There probably isn't much argument that we're more aware of our surroundings on a bike than in a cage but does that relate more to risk assessment than simply appreciating our surroundings?  From a personal viewpoint whilst riding bigger capacity, faster sports-oriented bikes, riding challenging roads at pace with precision constituted most of the pleasure; enjoying the scenery was an altogether more rare experience.  Bikes like the Blackbird are capable of being ridden slowly but they can get uncomfortable quite quickly in this mode and to be perfectly frank, they're boring unless being operated in what might be termed their design performance envelope. (A technical euphemism for coming to the attention of the Highway Patrol in a big way). 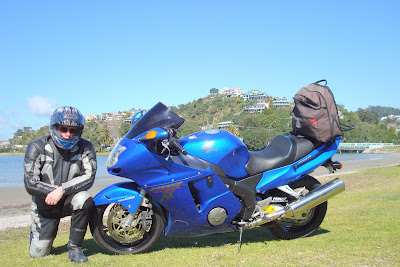 Starship Blackbird, the Warp Speed Express
Whilst a good, fast fang is still excellent, especially with trusted friends; a naked bike such as the Street Triple with superb ergonomics has undoubtedly broadened my riding pleasures.  Being able to drift along at slower speeds sitting more or less vertically with minimal load on the wrists or neck has opened up a whole new dimension on the world.... and actually stopping for longer than rapid refuelling and a quick gas station pie is suddenly ok!!!!  Ok, so those of you who don't currently own sports-oriented bikes will quite rightly say, "Took your bloody time to figure that out, didn't you?"  Maybe it has nothing at all to do with age or maturity, and everything to do with the versatility of the Street Triple.  The point is though, there must be a whole world of riders like me who simply haven't really experienced how enjoyable riding at both ends of the performance spectrum is.


Having ridden for over 40 years and taken all this time to gradually cotton on to slow riding on isn't something I feel awkward about; it's actually rather exhilarating to realise that you never stop learning about new ways to enjoy your passion! (Like the previously reported riding of a scooter for the first time ever in 2009!) 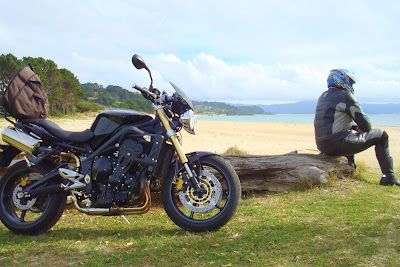 Stopping to contemplate and enjoy the scenery is ok!!!