I've never undertaken a motorcycling book review before so wasn't really sure how to start. Let's begin with a photo which might give a clue to my overall thoughts about this book! 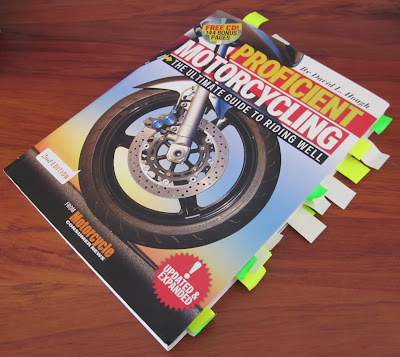 Tags, tags and more tags!
I'd like to think I'm a reasonably proficient motorcyclist after 4+ decades around bikes but that raises the question of what sort of rider should I be reviewing it on behalf of?  Would it matter whether the rider was experienced or not?  In the end, I started reading it from cover to cover and every time I found a sentence, paragraph or whole chapter which said to me, "Hey, that's pretty important", I stuck a self-adhesive tag close by.  By now, you'll get the picture that this is one heck of a good book and it's not stretching things to say that if it was given away with every motorcycle sold, motorcycling accident statistics might be a whole lot lower than they are now.

Even though you might have been around bikes a long time, the book demonstrates a couple of things....

- There's always something new to learn.
- The brain leaks like a sieve and the book is a fantastic refresher for stuff that you'd forgotten.  Use it or lose it!

David Hough has been riding bikes, talking about bikes and writing about bikes forever.  His 70+ years of age and over a million miles on two wheels make him a person who is seriously worth listening to.  Before we get into the book content, a word about his style.  There are other good books about motorcycling proficiency but some of them are a bit technical or evangelical which can be hard going depending on how you learn best, or what your current level of experience is.  David's approach is both rare and extremely effective.  Let's take his section on braking as an example.....

The first thing he does is gets your buy-in straight away by giving real-world examples of the consequences of failing to use good braking principles, often citing his own mistakes or those he's witnessed in simple, uncomplicated language.  It immediately takes you to your own shortcomings and grabs your attention.  David then moves to the theory of braking, aided with photographs, sketches and again, uncomplicated language.  He then shifts to the proper techniques for braking in a wide range of environments, how and why they work and even sets you practice exercises!  And whilst he's dispensing this wisdom, David does it with gentle humour and is never condescending.   As an example of his humour getting the message over, he's having a discussion with a young rider who is recovering from a broken leg from a collision with a car.  The rider was outraged that the other person didn't have right of way which reminded David of a little ditty  his father used to say:


He was right, dead right, as he sped along
but he's just as dead as if he'd been wrong.
When read in conjunction with the detailed advice he gives, it's a powerful message to hone your situational awareness skills.  So is his comment, "You're only paranoid if they AREN'T out to get you"!

The other thing about this book which I really like is that each topic is treated in a holistic manner.  Not only are improved technical riding skills covered but the psychology of situations and their importance in getting a good outcome are superbly covered with the aid of both photos and clear explanations.  Being aware of your surroundings is a vital and recurring theme but your emotional reaction and the reactions of other road users to various everyday situations also has a major impact on outcomes. Not reacting adversely to a perceived slight by another road user and getting distracted from the task of staying safe is indeed wise counsel - and too often ignored!

Your job is to get out of the way and get over your indignation!
Everything in this book is valuable but if I may pick on some additional examples which have a personal connection, they also serve to demonstrate the tremendous breadth of the topics covered.  These sections are extremely detailed and I'd be willing to bet that most readers will learn a heap of stuff about the effects of riding in adverse conditions, how to recognise you're in trouble and what to do about it.  People are a lot more susceptible to risk than they perhaps realise.

Physiological effects of heat and cold on motorcyclists.
Some years ago, I was on a weekend ride with friends in extremely hot conditions.  I knew about dehydration risks from a largely academic viewpoint so drank what I thought was an adequate amount of water, but in reality, nowhere nearly enough and began to feel a little unwell.  That evening when we got to our destination, a beer and a delicious seafood dinner were setting me up for further grief which didn't appear until arriving home the following day.  Dehydration, exacerbated by eating shellfish triggered a dose of gout in a big toe.  I'd never previously experienced gout and I wouldn't wish the pain on anyone.  Our family doctor explained that dehydration and often in combination with seafood is a fairly common cause.  Had I read this book at that time, I'd have certainly been much better informed about some of the real risks of overheating and dehydrating.  The impact of cold and wet are also excellent.

Riding a road bike on dirt.
Sooner or later, most of us will find ourselves on a section of dirt, either from a wrong turn or road works that make a moto-cross track look tame by comparison!  Growing up in urbanised areas of the UK, I didn't have the early off-road riding experiences that many of my fellow Kiwi and Aussie riding mates seemed to get as a matter of course.  I owned dirt bikes after emigrating to NZ but by then, I didn't bounce too well!  Consequently, I've always been nervous about significant dirt riding on a road bike, especially with big sports tyres and loaded for a few days away. 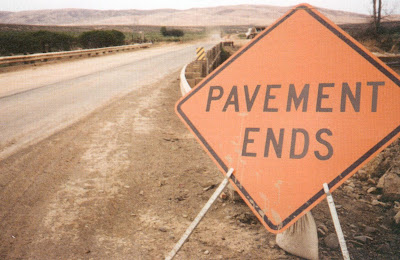 That sinking feeling......
David discusses the topic of riding a road bike on dirt both from a practical and theoretical viewpoint so that you clearly understand what's happening and why, and what course of action to take.  I'm sure it's going to pay off in spades from a personal viewpoint!

Group rides
About 10 years ago, some of my regular riding partners and I met some other riders at the remote coastal village of Kawhia and decided to ride the 40-odd km of largely blind corners and narrow road back to civilisation with them.  I won't go into detail but their riding was so appalling that every other road user on that stretch was put at extreme risk of serious harm and we pulled out after a handful of km.  It was that ride which made me gun-shy of riding in large groups.  On the same theme, we live a few scant minutes away from a stretch of road called the Coromandel Loop, one of the most popular roads for bikers in the north island.  It's a safe bet that on a fair percentage of large group rides on the Loop, it will result in one or more people decking their bike.  As a result of past experiences, the only people I'll group ride with are half a dozen or so mates whom I've ridden with since time immemorial. 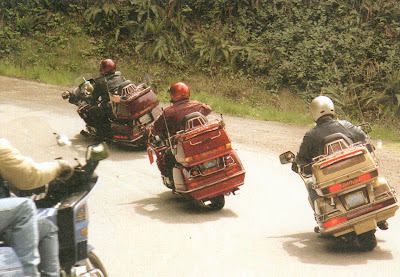 Hmmmm.....
The relevance of  the paragraph above to Proficient Motorcycling is that it covers group rides in huge detail, including the organisation and dynamics of such events as well as a fascinating insight into the psychology of what can happen on such rides.  Some people love organised rides, others steer well clear.  I'm in the latter category but at least I know in more detail why!  For those in the other camp, reading this section of the book will definitely help you to stay safe and organise much better rides if that task ever falls your way.

Conclusions.
It's a job to judge whether I've done Proficient Motorcycling any real justice in the main part of the review but let me say that if I was going to recommend just one single book to a rider, either new or experienced, it's going to be this one.  Both the content and style lend themselves to an easy understanding of each topic, as does the practical advice.  Going back to an earlier comment, experienced riders need skills refreshment as much as learner riders benefit from upskilling and the book will help immensely in this regard.  I'll confess that I'd heard of David Hough a few years ago simply as a prominent American Motorcycle author but had never read any of his work until our recent collaborative posts on this blog about ageing riders.  The most honest and contrite way to sum it up is that I'm very pleased to have corrected that omission.

One final comment for the benefit of the part of the world that drives on the left.......  the photos, sketches and narrative completely transcend whether you drive on the left or right hand side of the road so don't worry.

Have a wonderful and safe Easter everyone!
Posted by Geoff James at 16:20