Hue
The flight from Hanoi to Hue was our first experience of Vietnamese domestic air travel and we wondered whether it was going to make Aeroflot look like the benchmark for world airline safety.  Check-in was a breeze with our guide Giau's legendary efficiency and the departure lounge was a world removed from the arrivals hall which resembled something from a John Le Carre cold war espionage novel. The view through the departure lounge windows was equally reassuring as Vietnam Airlines were using modern, western aircraft as opposed to Illushins and Antanovs! The only minus on the ledger when the flight was called was that Vietnamese airports have yet to master decent boarding procedures. For starters, passengers weren't called by blocks of numbered rows, resulting in a huge scrum at the departure lounge doors.  Airbridges also seemed in short supply with just steps at the fore and aft hatches, resulting in traffic jams both on the steps, then in the aircraft aisle itself with rear boarders heading for the front of the aircraft and vice-versa!  However, all that was minor in the scheme of things and provided some light amusement.  The aircraft itself was immaculate, the service efficient and a very pleasant flight. 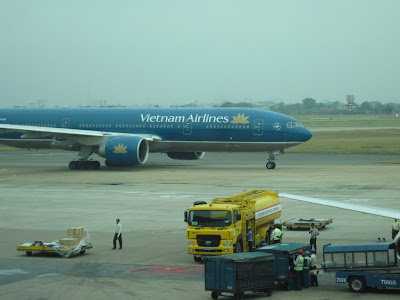 Landing at Hue, the increase in air temperature and humidity were immediately apparent - somewhere in the mid 20's C as opposed to 15 or below in Hanoi.  After giving southern girl Giau a hard time for wearing a coat, gloves and a scarf in Hanoi whilst we were dressed much more lightly, she was quietly plotting to run us around in the increasing temperatures further south to see how quickly we expired.  Told you in the last post that she had a wicked sense of humour!

I don't normally bother to comment on accommodation as it's  simply a place to lay your head before going out exploring and eating with the locals.  All our hotels were really really good but La Residence in Hue was something else!  Situated right by the river, it was the former French Governor's residence; expanded but the chic Art Deco style has been maintained - just gorgeous.  Here's a photo from our balcony: 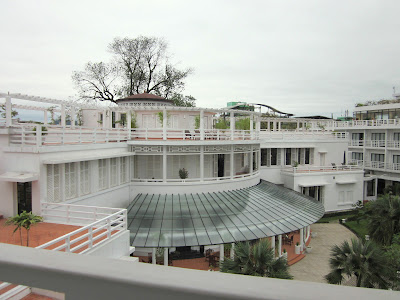 A number of things made it special but the clincher was that it felt more like a home than a hotel and that's something I've rarely experienced.  The staff were right on their game but at the same time, discreet and understated - really hard to describe but struck a perfect note.  Breakfasts were simply bewildering in terms of choice, you name it, they had it with a strong French influence.  We just stuck to fresh fruit and croissants which were light as a feather, accompanied by very runny Brie cheese that was made in heaven.  If you're going to Hue, La Residence is a must!

Now for something for the throttle happy amongst us which I hadn't noticed in Hanoi, but must have been there. Near the hotel were a set of traffic lights shown in the photo below.  Never seen one of the features anywhere before! 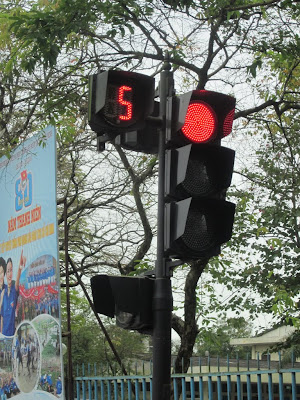 The feature I'm alluding to is the countdown shown in red.  In this instance, 5 seconds to go before it turns green, then starts a 30 second countdown back to red.  It seems to work just fine in warning people to ease up or help patience but with the western mindset, it would make an excellent drag racing Xmas tree for those so inclined (more than a few male bike riders haha).  A few round our way would be fun.

The day started with a boat trip on the Perfume River, so-called because of the alleged fragrance due to a particular forest upstream shedding aromatic leaves into it. 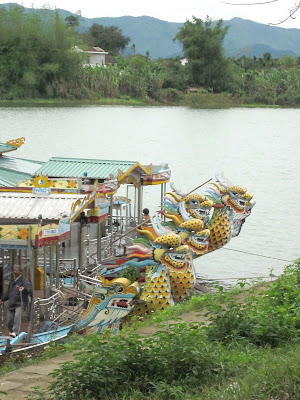 Th river is still extensively used for commerce and there were boats of all descriptions plying their trade.  I was particularly taken with one which was carrying river sand for concrete-making. Someone loading it must have got a bit enthusiastic as I swear it only had an inch of freeboard.  Here you are.... 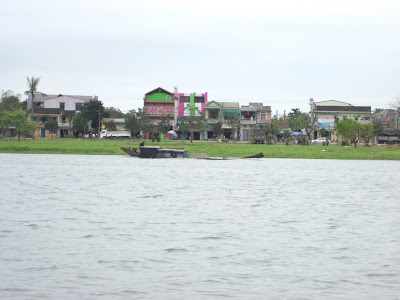 A trip was then made to the Ancient Citadel, which was the capital of Vietnam from 1802-1945, where the last King lived.  10 metre thick walls surrounded by moats, it's an impressive piece of architecture and is the size of a small town. 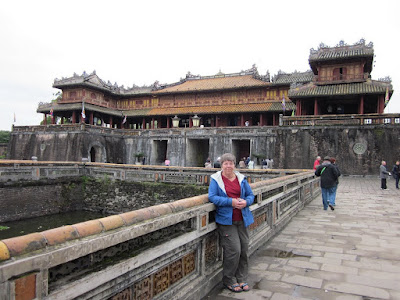 One of the decorative features I loved was the application of small coloured pottery pieces to make mosaics on the buildings.  Here are two examples: 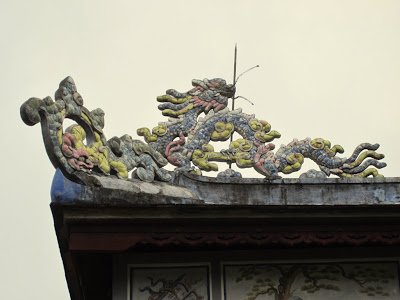 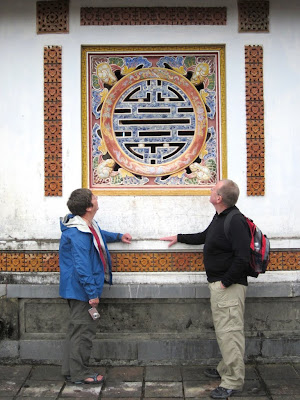 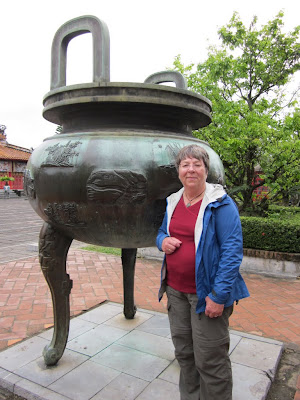 Bronze casting on a big scale

After a bite to eat, we visited a king's tomb.  Crikey, they did death on a grand scale back then! The elevated tomb and surroundings covered acres and also had copious wise men and warrior effigies to accompany the King in the afterlife.  It must have literally cost a King's ransom. 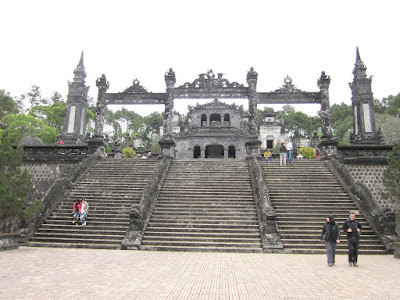 Tomb it may concern... 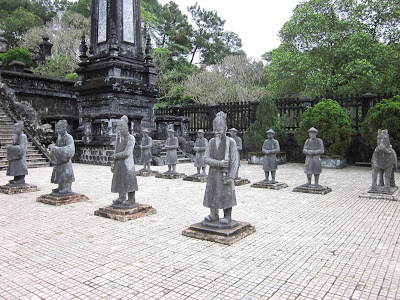 Warriors and wise men for the afterlife

With all the emphasis on royalty during the day, we knew that we were attending an Emperor's banquet that evening at a restaurant in town but Giau had kept quiet about the details.  I think her silence was part-payback for all the teasing we'd been giving her over the previous days.

Arriving at the restaurant, 4 unsuspecting Kiwis were greeted outside by the owner and taken into a room where the horror started to dawn.  The room was filled with ornate costumes befitting an Emperor's banquet and we were expected to wear them!  Visions of being the only 4 people in the restaurant clothed in joke costume flitted through the brain as did plans to wreak revenge on Giau.  As it happened, we were lead into a beautifully-decorated private anteroom where a small orchestra were waiting to play traditional music and sing just for us.  All a bit overwhelming but the privacy avoided any embarrassment with the clothing. 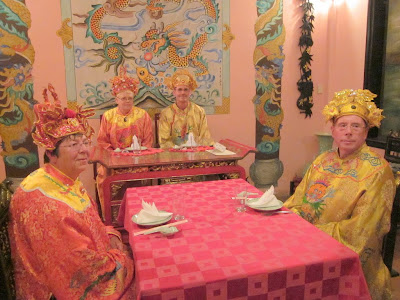 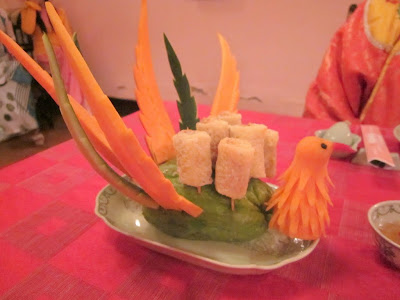 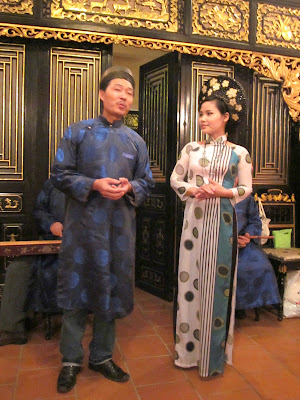 A duet by 2 orchestra members

Despite earlier worries, costume wearing (ahem...in private) was fine, the food divine and the small orchestra was superb.  If you've never heard of an instrument called a monochord, go to YouTube and find it.  Fantastic instrument and I'm surprised that a few rock bands don't use them.

We drove from Hue down to Da Nang via the Hai Van Pass.  The pass has World Heritage status and is really nice but to be honest, it isn't as spectacular as any of the major mountain passes in NZ's south island.  It would be great for a fang on a fast bike, but that would only be until you ended up as a radiator ornament on a big truck overtaking on a blind bend as they are wont to do out of town. 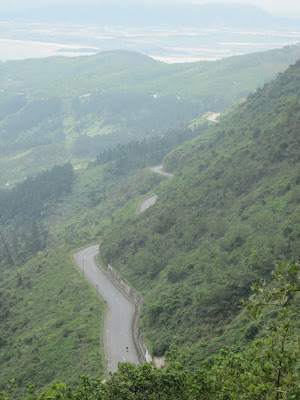 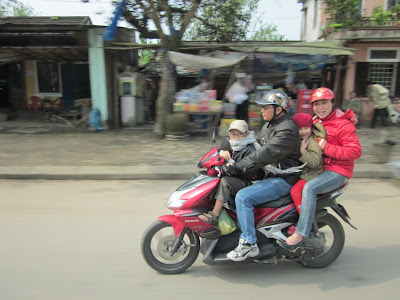 This is what you call a compact for a family of 4!

It occurred to me that with the profit margins on small bike sales in places like Vietnam, Malaysia and so on, Honda maybe don't give a rat's arse (a Kiwi technical term) about whether their latest dog of a VFR1200 sports tourer sells like hot cakes in the west or not.  It's probably not going to make much of a dent in the company bottom line with the huge, constant sales of small bikes.

Da Nang area
Da Nang was only a brief stopping point en route to the nearby Marble Mountains en route to our stay at Hoi An.  As we drove through, it was a surprise to see that substantial parts of Da Nang US military base still existed.  We drove along the frontage of China Beach but there was nothing special about it, although it would have been a wonderful diversion for the service people stationed in the region all that time ago. 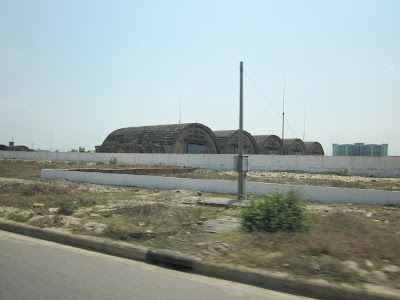 Part of Da Nang military base

A brief stop was made at a museum showing sandstone carvings and a few bronzes made by the Cham people in centuries past.  Magnificent in detail and surprisingly durable, it was a worthwhile experience. 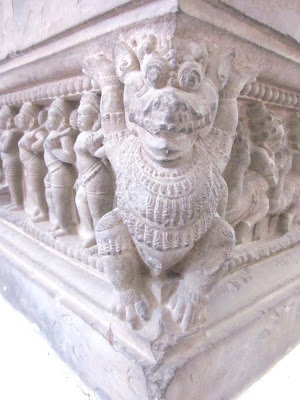 Fine detail on a statue plinth 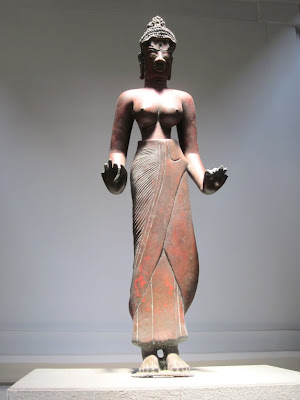 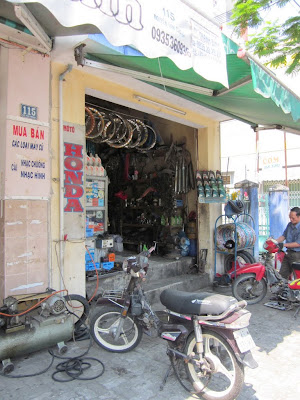 The Marble Mountains just south of Da Nang were a revelation. A cluster of 5 limestone and marble hills and the surrounding buildings are almost exclusively devoted to making works of art from the marble.  Even at the top of one of the mountains, the sound of saws and chipping hammers was really pronounced. 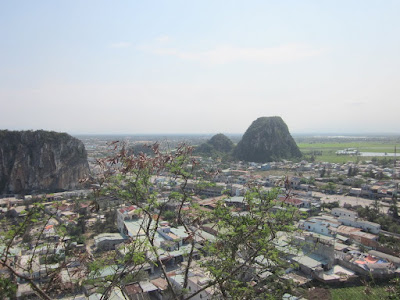 View from one of the mountains 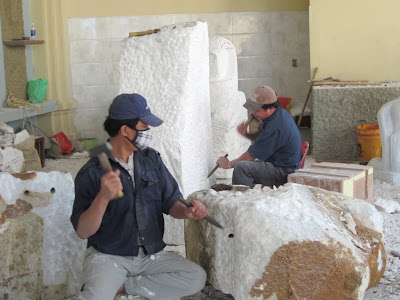 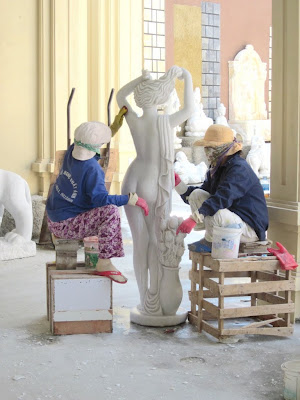 Polishing one of the statues


The carving was of the highest order and again, prices were very reasonable and the produced both classical and modern abstract works.  A marble statue like the one above would cost around US$3000 to purchase AND ship to NZ.


Hoi An
Note for female readers and guys who care about their appearance.....  Hoi An Old Quarter is THE place to shop, especially for quality clothing and accessories, much of it being made to measure within a day.  It's also a stunningly beautiful and colourful place which we all fell deeply in love with.  Spending time wandering about in the old quarter looking in the shops, eating or drinking, people-watching and enjoying the architecture was a great experience, even for a cynical non-shopper like me.  Of course, temperatures in the 30's C required regular refreshment! 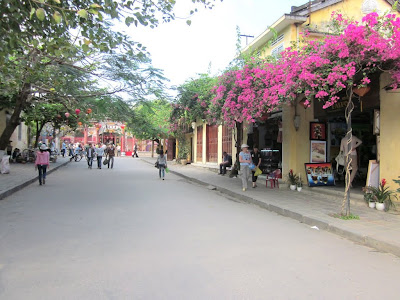 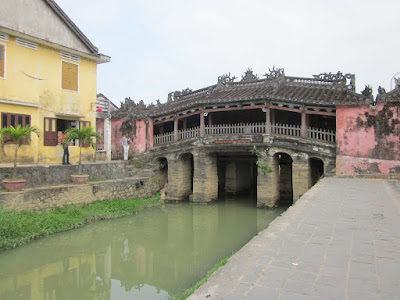 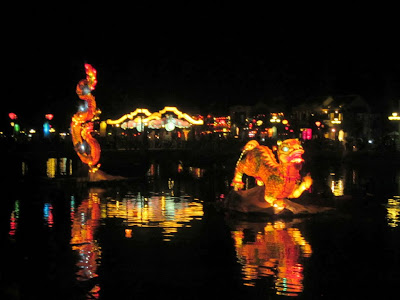 Huge illuminations on Hoi An river 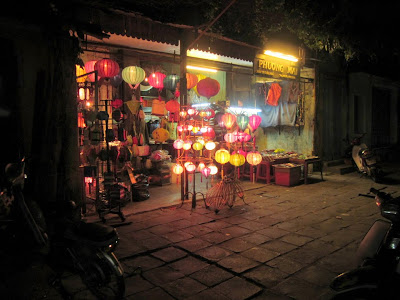 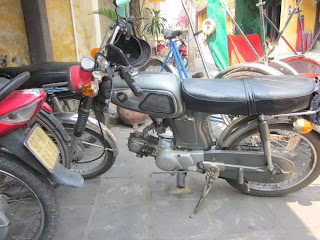 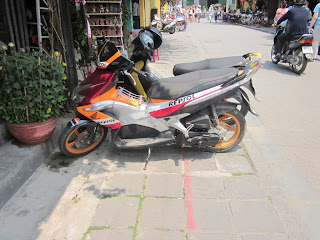 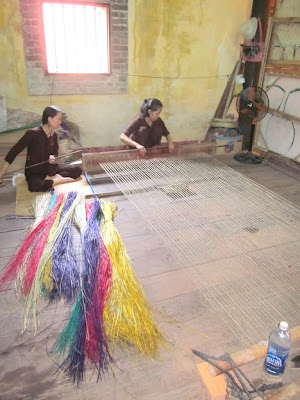