Hanoi
Leaving Malaysia on Air Malaysia bound for Hanoi, we were full of anticipation following our eldest son's glowing account of his travels round Vietnam on the cheap a few years back.   Arriving at the capital's main airport, the signs weren't promising with a fairly substantial military/security presence and an arrival hall which was as dreary and plain as you might mentally expect in a socialist state.  Added to this was the fact that the luggage from 3 flights had been dumped on one carousel and a real free for all ensued. Tag team wrestling among Russians, Vietnamese, Chinese and at least 2 Kiwis would paint a fair picture!

However, things were about to change.  We'd booked a limited numbers tour with a Kiwi-based company called Active Asia with strong Vietnamese links.  This provided 5 star accommodation for only 4 of us complete with a guide at a very reasonable all-up price. The guide was waiting at the exit, holding a placard with our names on.  This is Giau (pronounced Zow):  (Click photos to enlarge). 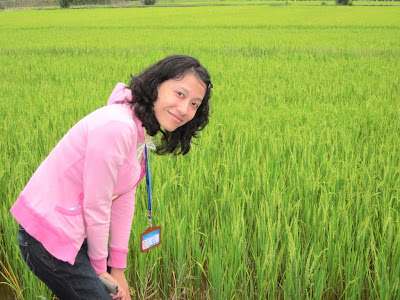 Giau is a southern Vietnamese 26 year old super-smart Geography graduate with excellent French plus good self-taught English. We fell in love with her almost immediately for her energy and enthusiasm (hence the Energiser Bunny tag subsequently bestowed by our fellow Kiwi couple). The fact that she was able to give as good as she got in the wicked humour and leg-pulling stakes quickly made her a great friend as opposed to just a very competent guide.

On the drive into Hanoi from the airport, Giau told us that there are around 7 million Hanoi residents owning 5 million motorcycles.  We believed it judging by the traffic!  Pushbikes mingling with motorbikes mingling with trucks and cars heading in all directions and leaning on their horns was a recipe for disaster to a western eye, but it all seemed seemed to work without major incident.  In fact, after a couple of weeks, it all made perfect sense and the main worry was me adopting similar measures on the return to NZ and becoming a road rage target!  On the way to the hotel, Giau pointed out number plates which signified state-owned vehicles and we were delighted to see that the Socialist Government drove such clearly socialist vehicles as late model Bentleys, Aston Martins and a few Mercs and Lexus' thrown in too.  Pragmatic socialism in action!
The tour wasn't due to start until the following afternoon when we were due to meet our fellow Kiwis Gary and Sue so Jennie and I traffic-watched from our hotel room (absolutely fascinating!) for a bit before heading out to find a restaurant that the locals ate in. 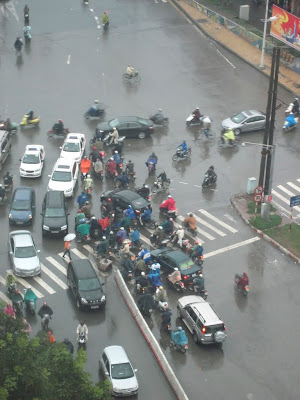 Visiting a local open air restaurant at the edge of a lake was great fun.  With a mixture of pigeon English, French, pigeon Vietnamese and hand signals, we managed to order interesting local entrées and main courses whilst carefully avoiding the allegedly popular stuffed fish bladder they seemed keen to have us sick up on.  Naturally, chopsticks were the order of the day but no worries as we use them a fair bit at home.  Only one minor embarrassment (me of course) when I dropped a heavy spring roll from considerable altitude into the little sauce dish and the resultant bow wave added further decoration to the front of my already colourful shirt.  The local Hanoi beer was great, as were the regional beers sampled further south. 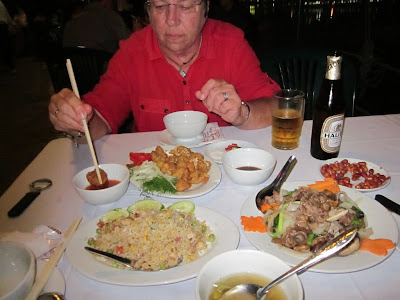 Entrées, mains and beers for two - US$12 equivalent

The food was superb with the local vegetables in particular having intense flavour and the more than favourable prices sent us to bed both full and happy.

Giau had told us how to negotiate the terrors of crossing the road in the face of vehicles apparently hell-bent on removing us from this life and our first crossing to visit a Pagoda restored in 1815 was a hair-raising experience.  Nonetheless, the practice of serenely walking out into the traffic, not making eye contact and maintaining a constant pace seemed to work just fine.  I noticed that Jennie always walked on the down-side of me but charitably assumed this had absolutely nothing to do with self-preservation and was simply blind coincidence.

The small pagoda was gorgeous and as an added bonus, a colourful religious ceremony was in full swing.  We were somewhat taken aback when some young children in the solemn procession broke into broad grins and in perfect English, said, "Hello, how are you?".  We could have been from France or Albania for example, but the Vietnamese undoubtedly have a nose for the French as I will explain in a later post. 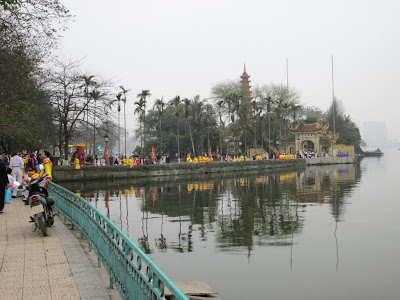 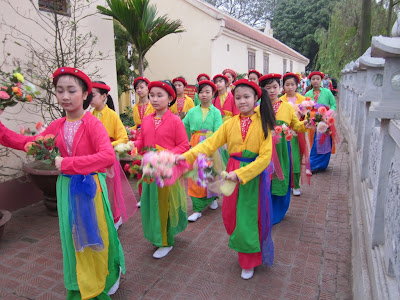 Religious procession at the pagoda

The afternoon was spent meeting up with Giau, Gary and Sue (who were great), then walking round the old quarter.  Many of the shops also doubled as manufacturing premises too, even spilling out onto the crowded pavements - wonderful stuff!  When I queried Giau about the makes of the  little motorbikes and scooters on the roads, she said that most of them were Japanese.  Considerably more expensive than the Chinese ones but ran for more than a few days without expiring on the roadside!   As per the previous post on Malaysia, the small bikes (virtually no big ones in Vietnam) are strictly work-horses, not for casual enjoyment. 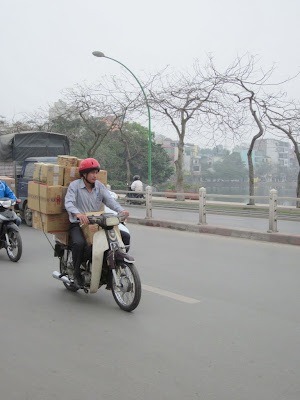 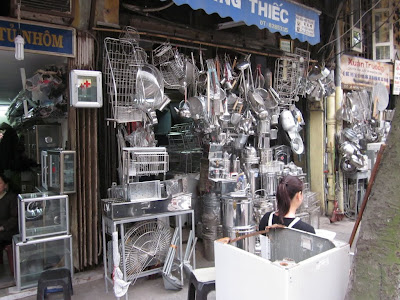 Tinware - you name it, we make it! 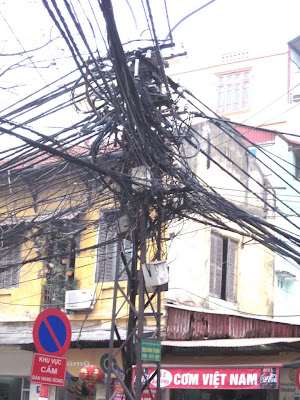 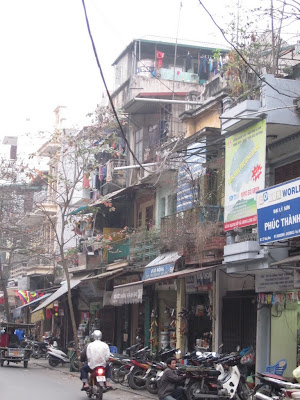 Shops below, living quarters above
Pavement parking?  No worries! 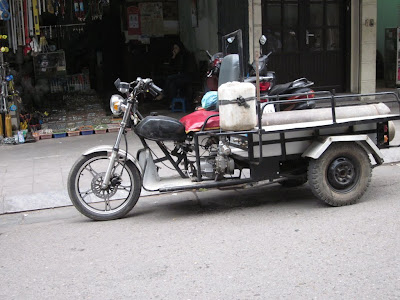 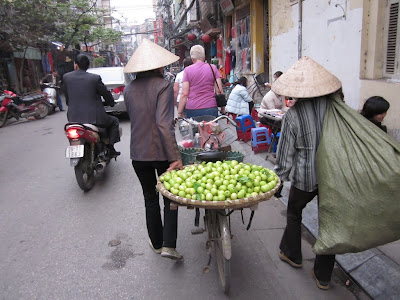 Mobile fruit stall with back-up stock in the sack

That evening, we all went to a local restaurant to get to know each other in a social setting.  It was here that another surprise lay in wait, at least for Jennie (barely-suppressed snigger).  We were all having what's known as a traditional hot pot where we all have pots of boiling flavoured broth in front of us. The idea is for the diners to dip raw vegetables and thinly-sliced meat or fish into the broth for a few minutes and cook them as you eat, dipping them into little bowls of various sauces.  The photo is a serving of veggies for one person - no chance of constipation with this diet! The long things are a type of mushroom and the triangular object in the foreground is a slice of Lotus root - wish we could get all of them readily in NZ. 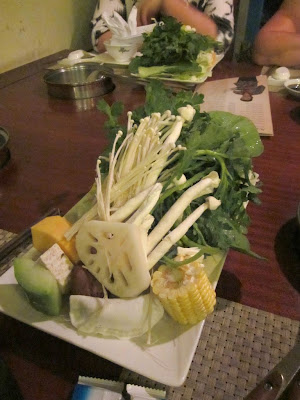 Fragrant, tasty veggies (serving for one)

Now, here's where it gets interesting as Jennie ordered prawns and they came in a covered pot.  As soon as she lifted the lid, 6" long prawns came leaping out of the dish, hell-bent on not becoming part of the food chain.  I'm sure her scream didn't disturb the other diners too much as the hysterical laughter from our table would have diverted them rather nicely.  Jennie is made of stern stuff though and soon had them rounded up and into the pot!  Sue remarked on how lovely her sliced salmon was and Jennie sweetly asked whether that was due to it being dead already.  Fabulous meal and the "live entertainment" built on an already good relationship between us all.

Next day, we visited Ho Chi Minh's Mausoleum which turned out to be a darned sight more interesting than you might think and the Temple of Literature, a seat of learning for wise men originally built in 1070. 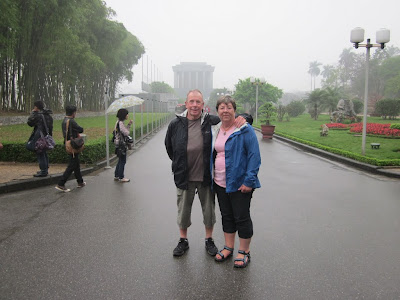 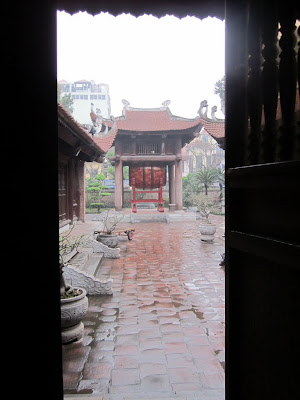 Massive drum in the Temple of Literature

Couldn't resist taking the next photo.  There were some young women in the Temple of Knowledge grounds celebrating university graduation.  Dressed in traditional clothing, they looked both elegant and absolutely stunning. 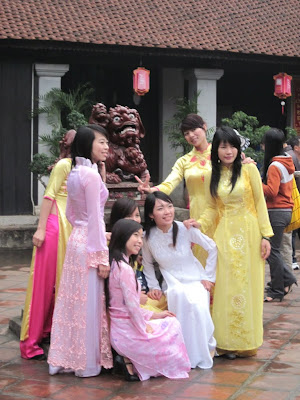 Lunch was at a restaurant largely staffed by ex-street kids who were learning cooking and catering skills.  You wouldn't have guessed by the impeccable standards. 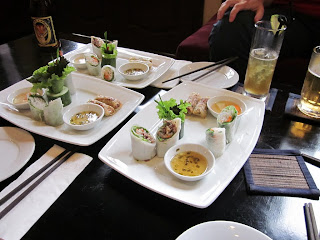 Even in the first couple of days, it was clear that Vietnamese socialism is applied with a very light hand indeed and there appear to be few restrictions on personal freedoms and religious choice.  Also, Vietnam was what you might describe as cultured at a time when most of the western countries were rather more barbaric by comparison.  A great start to our stay.

Halong Bay
Halong Bay is a 3 hour drive east of Hanoi and has World Heritage status.  Some 1500 sq km in area with nearly 2000 islands, it presents a breathtaking vista.  We were due to cruise part of the Bay in a modern version of a traditional junk / sampan with a visit to a floating fishing village and an overnight stay on the vessel.  It really is one of the World's "must see" places.  Just before we got there,  I managed to take the photo below, showing yet another test for the suspension and handling of a Honda Cub. 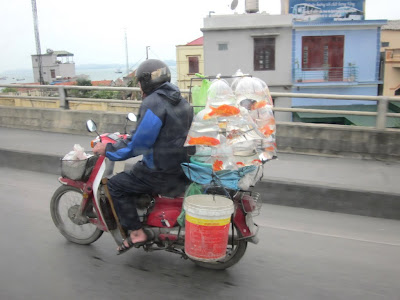 Goldfish R Us.  Stop me and buy one
(Note approved safety footwear) 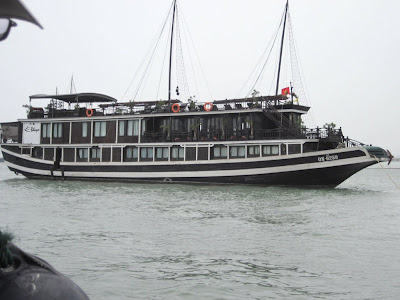 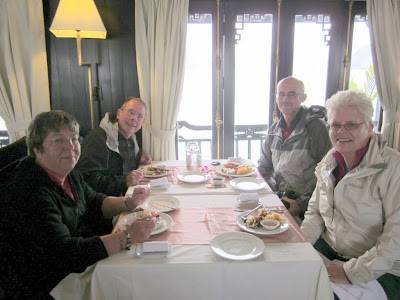 First stop was to a floating fishing village where they fished for ummm... fish and squid and harvested cultivated and natural pearls.  The village was floating in the centre of a number of small islands which provided shelter.  You really had to be there to experience the majesty of the setting. 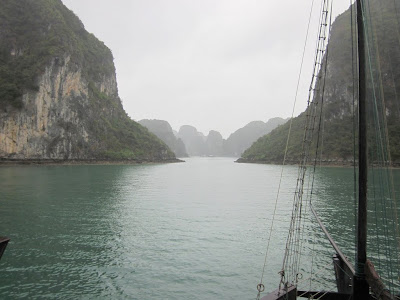 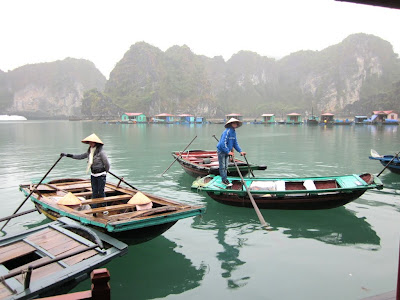 Village and small water taxis to take us about 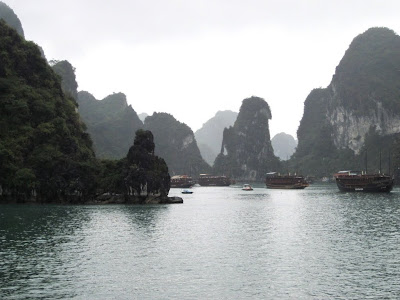 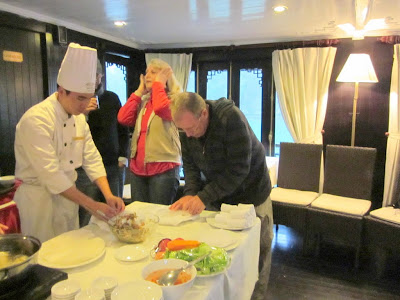 
The picture below is particularly interesting.  It's a tender which came out the next morning to refuel the sampan and I leaned over the side to see what was going on. You'll note some tarpaulins barely covering a tank in front of the cabin.  The liquid inside is diesel fuel - eek!  Good job it has a relatively high flashpoint but I still had visions of becoming part of a large-scale fireball if some careless bugger dropped a cigarette.  Somewhat relieved when it departed! 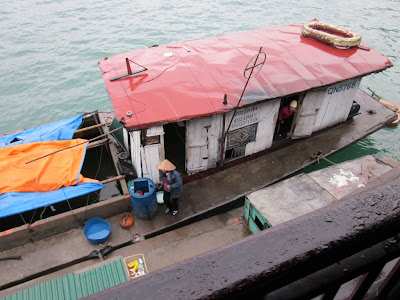 
Next day, we headed to shore and back to Hanoi to catch a flight to Hue.  However, we had time to drop into a couple of places and see some magnificent traditional craftwork.  The first was to a tiny factory which produced embroidered pictures.  Some of them were so realistic that they looked like photographs or very lifelike paintings. 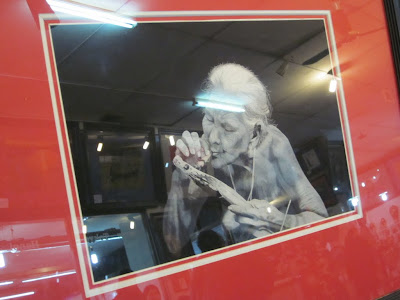 This is embroidery, not a photo!
Have a look at it in enlarged mode 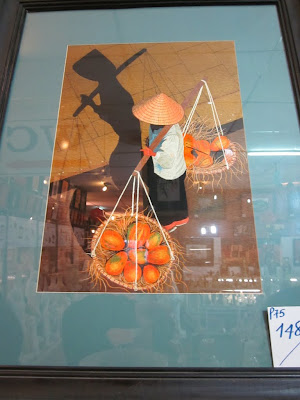 More beautiful embroidery
These pictures take between 2 and 4 months to complete depending on size and the price ready-framed is less than US$100 per item - incredible.

The next stop was at a sizeable pottery factory.  A lot of the bigger items were moulded rather than thrown on a wheel but every item was hand-painted as opposed to using transfers. Much of the output was for Vietnamese domestic use although the really large vases were exported too, drool, drool.  We settled for some delicate Chinese-style porcelain soup spoons to replace existing James household losses which were inevitably the fault of a certain clumsy person.  Oh ok, that would be me then. 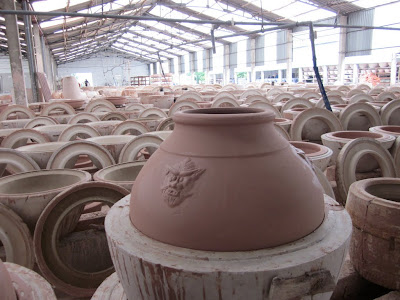 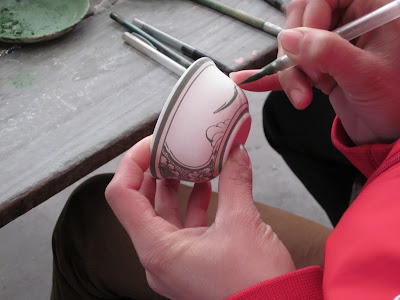 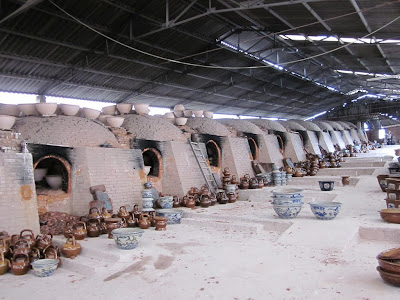 Rows of kilns being emptied after mass-firing

On to central Vietnam in the next travel blog.......