Innocents on the loose in America 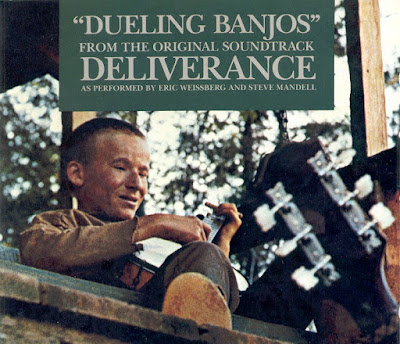 Be afraid, be very afraid.....
Just before we (finally) vanish overseas this week, this is for you Lori!

BeemerGirl (Lori) made  a recent post  about creepy books and exploring equally creepy country back roads.  The comments soon turned to the worrying sound of banjos at the end of these lonely roads!  I made mention that I'd spent a little bit of time in Tennessee, Alabama and Louisiana back in the mid-90's working with our parent company, a large pulp and paper manufacturer and therefore had some direct experience of the type of backroads which Lori and others mentioned. These diversions down side roads (sticking to the tar seal - we weren't that dumb!) were delightful.  We stopped for lunch at a catfish eatery miles from anywhere.  The food was outstanding but it was slightly unnerving as the local patrons all looked pretty similar, even down to everyone wearing the same John Deere caps.  We had a fleeting worry that we were going to be spirited away to improve the local gene pool but all was well as they were unfailingly charming and hospitable.

In Louisiana, we stopped at a roadside fruit stall, manned by Ma and Pa Clampett.  Whoever said that the USA and NZ were 2 cultures united by a common language was just a touch optimistic!!!  We'd probably have been better off speaking French.  Ma Clampett showed total mastery of world geography by asking whether we were from Noooo Yawk!!  Don't suppose they got many northerners round those parts and they probably wouldn't wouldn't have got the joke that NZ is even further south than Louisiana. Even got stars on our flag. 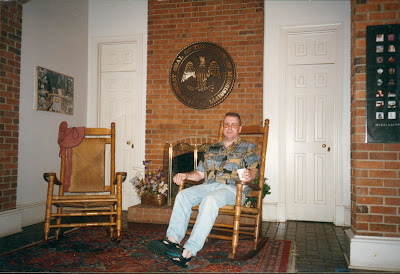 Yours truly at an interstate info/rest stop
However, it was in N'Orleans that the tables were reversed and it was the Kiwis that were shown to be complete country hicks, me in particular!  Four Kiwis arrived on a wet and humid Friday lunchtime for a couple of days of R and R.  After checking into our hotel in the French Quarter, lunch consisted of beer and oysters at a number of the oyster bars in town.  Not a smart move really given that we were dehydrated to begin with.  By mid-afternoon, it was time to return to the hotel and get a bit of shuteye ready for an evening on the town.  We were "not drunk, but having drink partaken" if you get the subtle difference.  Due to the rain, my feet were soaked and my socks constituted a severe health hazard; complete disposal being the most expedient option.

You need to understand that the following thought processes were of someone temporarily running on just a handful of brain cells at that stage so there's your answer to the obvious question "Whatever were you thinking of?" when you've read the rest of this sorry tale.

There was no way I was going to leave them in the room rubbish tin for the cleaning service to discover as they would soon gain a life of their own, so they had to be disposed of in another way.  The first thought was to look in the corridor well away from the room for a rubbish disposal facility.  Wandered the corridors of this beautiful old hotel in soggy clothes and bare feet, failing miserably to locate anything.  Getting back to the room, the solution was obvious – stick them out on the ledge that ran round the outside of the building at window level.  Failure no.2 – the windows were screwed shut, presumably because open windows interfered with the air conditioning.

Then a stroke of semi-drunken genius!  Why hadn’t I thought of it in the first place?  I would flush them down the toilet!  So in go the socks and here is where the plan started to come apart in a big way.  Most American toilets work on an entirely different principle to the raging torrent NZ ones.  U.S ones seem to sort of work on a gentle whirlpool effect that is fine for intended purpose but evidently not for lightweight large surface area items like socks.  My socks just serenely sailed round and round on the outer edge of the toilet, not even remotely looking like disappearing.  After another failed attempt, drastic measures were called for.  I rolled up a sleeve and physically rammed them up round the hidden bend.  It was actually quite a tight fit and I did suffer some anxiety about getting wedged and having to scream for help. That would have not been a good day if my mates had found out. However, all was well and it worked perfectly after a quick flush.  I was slightly concerned at perhaps being the cause of the entire French Quarter sewage system to back up, but dismissed that as being the product of an over-fertile imagination.  Female readers may now say: "Ewwww.... guys!!!".  Let it be said that you were warned..... 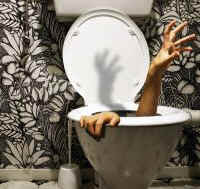 Not this drastic, thank goodness!
Fully recovered later that evening, we joined the carnival atmosphere, ate well and listened to some magnificent blues, jazz and a live Cajun performance by Mamou.  One of our group who was a South African recently turned Kiwi was visibly smitten by a spectacular young lady walking in front of us....  about 6ft tall in heels and wearing a micro-mini skirt.  As we walked past her with our colleague close to meltdown, another colleague asked him (rather unnecessarily I thought) why aforesaid young lady had an Adam's apple.  It took him a few seconds to cotton on and his red face would have lit up the whole of Bourbon St!  We were virtually crying at his discomfort - some friends, huh?

There were a few other occasins for merriment at the expense of each other but the saying, "What goes on tour, stays on tour" is perhaps the best defence! 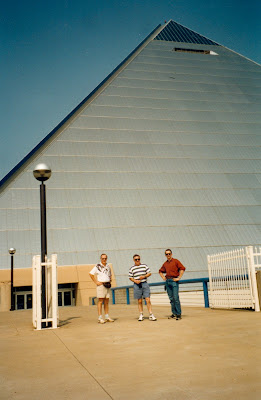 My 3 Kiwi mates in Memphis
Despite the occasional clash of cultures and hilarious misunderstandings, we all loved the Southern States with a passion.  A more welcoming and generous-spirited people would be hard to find anywhere.  In fact, wherever we've travelled in the world, ordinary people have been unfailingly wonderful.  Visiting parts of the USA and Canada are definitely on Jennie's and my Bucket List.  That is, if I'm let back in! F-111 at Barksdale AFB the day before we flew back to NZ
Posted by Geoff James at 14:13