Jennie and I have just got back from a holiday in Malaysia, Vietnam and Singapore, a bit jet-lagged, unshaven (err..in my case) but very happy about the way it all worked out.  This is the first of  a few posts about our encounters, food, fun and lots more besides - even motorcycles!

Malaysia
The capital of Kuala Lumpur was a convenient stopping-off point 10 hours flying time from NZ to give us time to catch our breath for 3 days before heading on to the main part of our holiday in Vietnam. I'm not sure what we were expecting but the surprises started on landing at KL airport.  It's as modern and organised as the best airports anywhere, with a rapid transit system to other parts of the airport within a few metres of getting off the plane - simply superb. The second surprise was the motorway systems connecting different parts of the country to each other and the airport and again, as good as you'll find anywhere. By and large, the motorists were pretty well-behaved although speed limits seemed to be largely advisory. Apparently, all the expenditure on good infrastructure and city development has come about through relatively recent large finds of oil and gas and although some of the smaller provincial communities still seem a bit down at heel, that applies pretty much anywhere in the world.  Religious tolerance is enshrined in Malaysian law and relationships between various ethnic and religious groups appears to work well in practice from what we saw and read about.  Everyone was very friendly and went out of their way to be hospitable to us, even out in the backblocks. 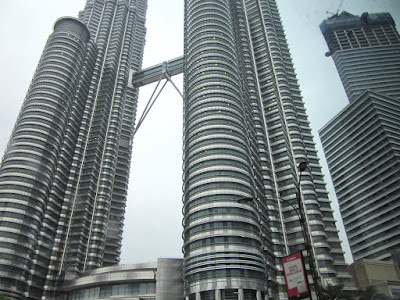 There are huge numbers of bikes in Malaysia but most of them are small capacity scooters which are used for cheap family commuting.  However, there were plenty of teens who rode jazzed-up scooters and small bikes who will probably become the enthusiasts of the future.  There were also quite a few big bikes, both cruisers and sports-oriented.  Difficult to know whether these were locals or not as Singaporeans duck across the border to misbehave as the Malaysian roads are better for bikes and the cops rather more forgiving of ummm... a brisk pace! The freeways are bike-friendly and on major toll roads, there are toll booth bypasses for bikes.  The photo shown below shows the bike lane diverting from an urban freeway toll booth.  The bike lane on the freeways is exclusively for bikes although the fast boys seem to prefer mixing it with the cars rather than tangling with slower scooters.

Lane splitting at speed is the norm in Kuala Lumpur and at traffic lights, there are always dozens of bikes at the head of the queue.  Despite a lot of the bikes being 2 strokes and the consequent blue haze covering cars when the lights go green, there's never any horns used in anger like the western world; everyone seems remarkably tolerant.

One practice which we never got to the bottom of was how jackets were worn!  Protective gear for general commuting was virtually non-existent apart from light helmets.  Flip-flops were the safety footwear of choice - eek!  Jackets were light nylon zip-up affairs, presumably as a nod to the high temperatures and humidity.  Here's the thing though...... most commuters wore them unzipped and backwards so that they were open to the rear!  The only reason we could think of  was as large-scale ventilation to stop getting sweaty at low speeds! 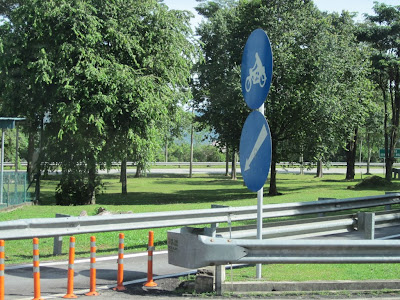 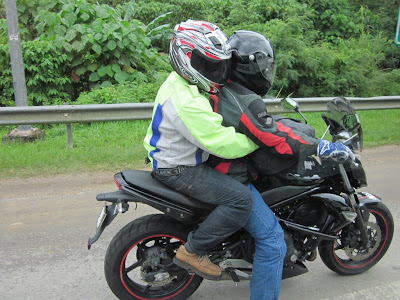 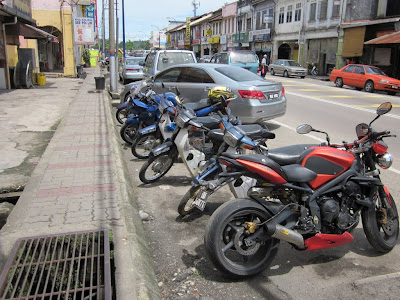 Leaving the motorcycle scene for a bit, we toured round the outskirts of Kuala Lumpur and came upon the Batu Caves, a significant place of worship for the Hindu religion.  By the stairs to the cave was a 48 metre high statue of a Hindu deity, an impressive piece of sculpture by any measure. The steepness of the 300 steps to the cave mouth were a real trial, especially with temperatures in the mid 30's C and humidity to match.  We were knackered and wringing wet by the time we got to the top!  The main cave itself was impressive, albeit choking with incense.  We had a quiet chuckle at the enterprise of the (presumably) approved vendor at the top of the steps.  He was enthusiastically selling tacky religious artifacts to the devoted whose resolve had been eroded by the steep climb, but we struggled to find religious significance in the model helicopters and toy guns he also had on prominent display.  Safer not to take a photograph methinks!! 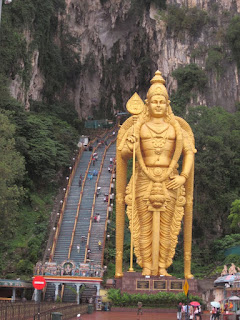 We also visited the world-renowned Royal Selangor pewter factory and saw some beautiful workmanship ranging from pewter tankards through to the most intricate pieces of art.  Training the craftsmen not unexpectedly takes several years. 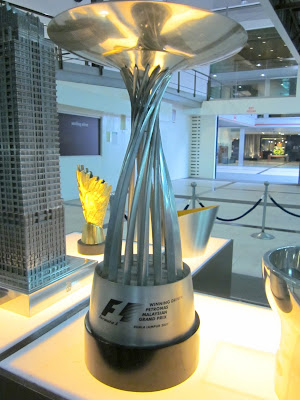 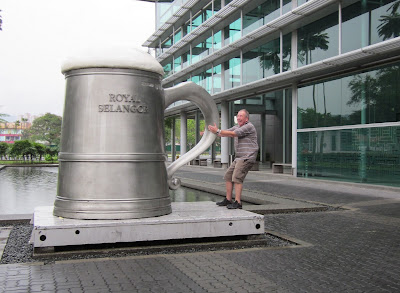 A bit bigger than your usual pewter tankard!

Traditional skills in this part of the world are very much in evidence and on the way back to our hotel, we called in to a small enterprise where Batik textile painting on bolts of cloth was being carried out, mainly on silk. Although the work was stunningly beautiful, we couldn't see Jennie wearing a sarong at a traditional Kiwi BBQ back home, so opted for a magnificent hand-painted orchid on silk cloth to get framed in NZ. 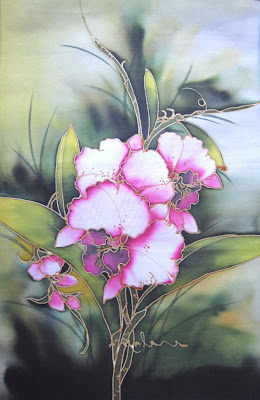 The following day, we headed for an elephant sanctuary some 2 hours away from the capital.  There is still a large amount of wildlife in Malaysia, even close to to the major freeways which seems a bit bizarre by western standards.  Stopping for a roadside pee and ending up as a light snack for a tiger or a big python brings an interesting dimension to motorcycling thrills in this region!

Stopping at a village eatery on the way was also interesting.  Putting aside our reservations about hygiene (mainly because we had sufficient pills to cure most diseases known to mankind), we dived in to sample authentic Malaysian cooking.  It was a buffet arrangement  where for a miniscule amount of money, you could help yourself to as much as you liked.  Some items which looked like entrails cunningly disguised with lots of sauce were carefully avoided but anything which resembled real meat and fish were gamely tried.  A few selections were eye-wateringly hot, but delicious.  Even better, there were no repercussions a few hours later!  The proprietors and locals eating there were good-natured and welcoming, making it a really enjoyable occasion. 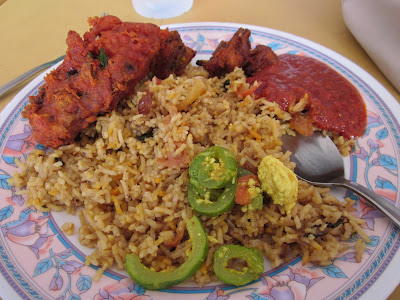 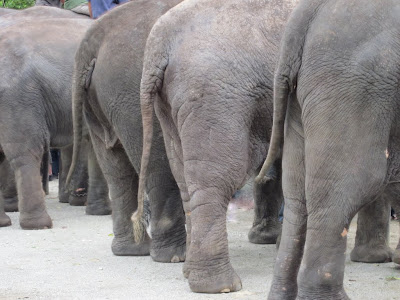 Being the butt of jokes 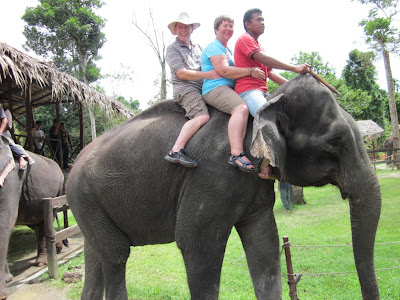 A bit of padding would have been nice... (wince)! 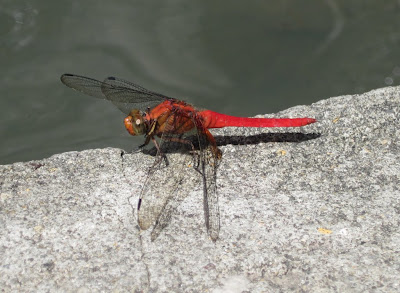 One of many spectacular dragonflies 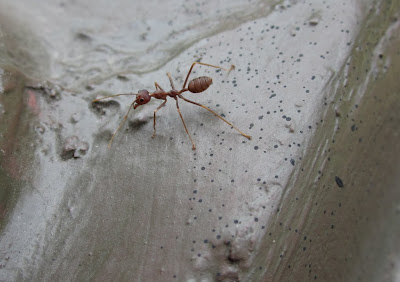 Three days in a new country is grossly inadequate to make any meaningful assessment but we very much liked what we saw.  Friendly, industrious people, religious tolerance and appearing to develop in a thoughtful and planned manner.  Oh, and very few western fast food outlets in evidence.  That's got to be a measure of a society with its head screwed on, hasn't it?