Hoi An and Central Vietnam continued....

Jennie had been looking forward to Hoi An for retail therapy and we found a shop which satisfied a fair few of her needs in one hit!  It was a shop which bred silkworms and made garments from silk as well as a range of clothing from other high quality materials such as linen.  One of the great things about Vietnamese shops is their courtesy.  Whilst Jennie was wandering around plundering the shop, I was given a comfortable chair with a complimentary pot of green tea - sure beats being lead around by the nose trying to answer questions about style, colour etc which no guy on the planet has ever answered truthfully without getting into serious trouble! 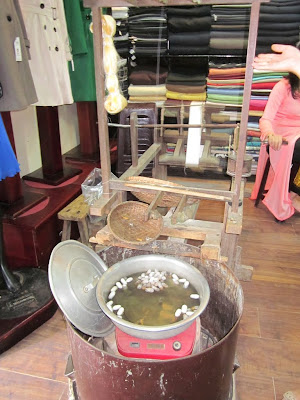 Silkworm cocoons being unwound into thread


The C.E.O saw some linen slacks she liked so got measured of a pair.  In fact the cost was so reasonable that she ordered 2 in different material patterns.  Two women measured Jennie, then took 2 digital photos of her front and side-on as a guide for the tailors.  Twenty four hours later, she had 2 beautiful pairs of  dressy slacks which were an absolutely perfect fit.  Some items in raw silk were also purchased for our daughter and 2 daughters in law so that got a lot of the shopping out of the way in one hit! 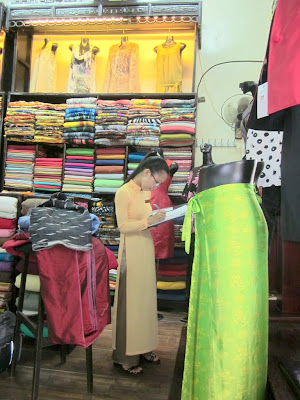 Recording Jennie's measurements
(I'm under caution not to show Jennie being measured!!) 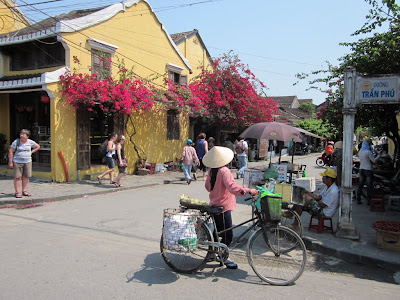 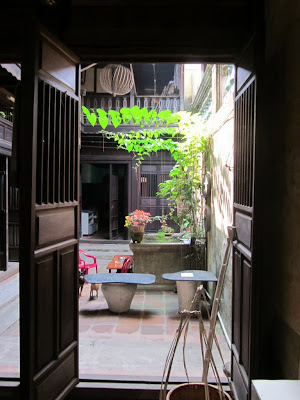 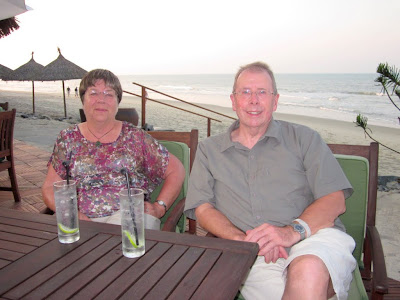 Poolside for pre-dinner cocktails, Hoi An 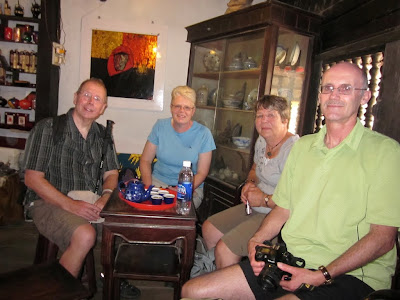 Working up an appetite!

After some serious shopping, it was time to immerse ourselves in a bit more culture with a trip to My Son (pronounced Mee Shon) Holy Land less than 2 hours from Hoi An.  On the way, we stopped off at a little farmlet where a family grew peanuts, sesame and rice as well as making rice paper for spring roll wraps or toasting to eat with other food.  They also had a couple of cute piglets out back which Jennie loved and she was less than amused when I said, "Ooh, breakfast!  Another own goal on my part, sigh.... 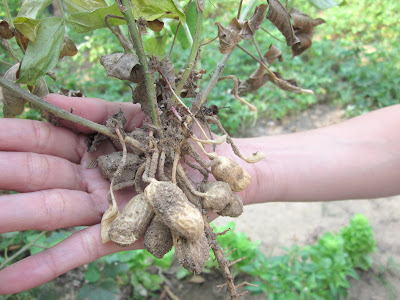 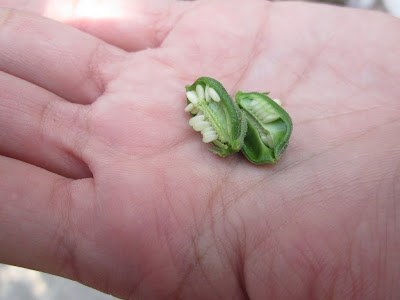 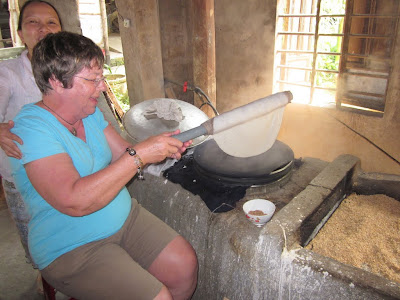 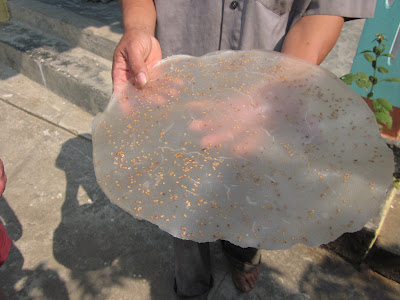 Arriving at My Son, the local guide gave us an overview of what we were going to see.  Originally built and occupied between the 4th and 12th centuries by the Cham people for religious purposes, it was only rediscovered and fully reclaimed from jungle in the early 20th century.  Each historical period has its own architectural style. 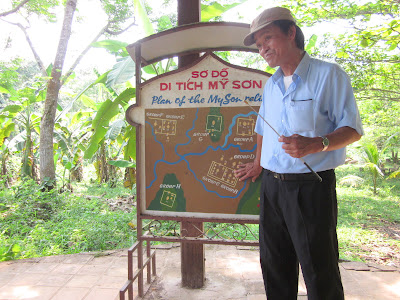 Our My Son guide - what a gentle, lovely guy

We walked some distance to the buildings with temperatures in the high 30's C and fearsome humidity. In no time at all, we were literally soaked through with perspiration - Giau had her revenge for our teasing in the north of the country when we pulled her leg unmercifully!

The buildings were magnificent and the gaps between the hand-made bricks were virtually invisible - amazing construction skills. 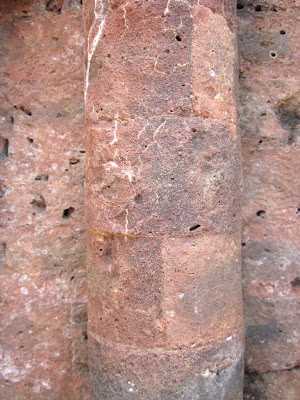 Brick column - joins are all but invisible 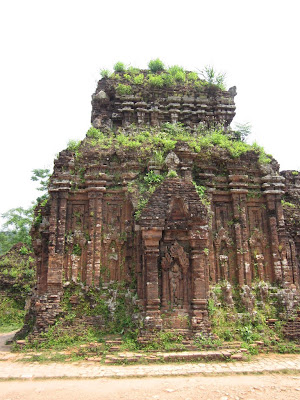 One of the rediscovered buildings 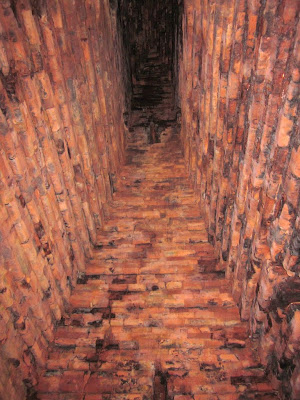 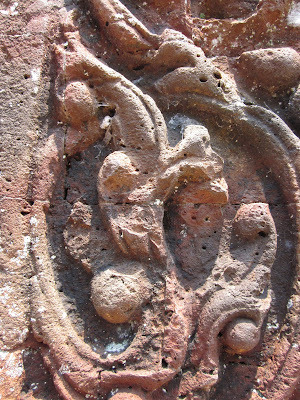 Ornate detail carved into the bricks 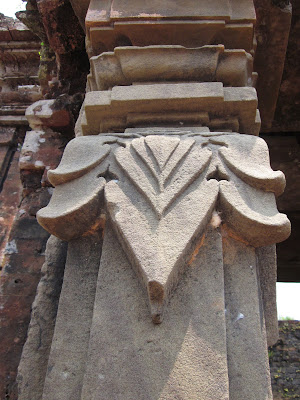 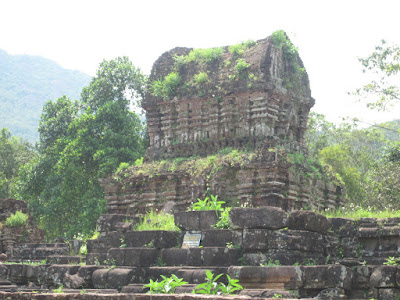 We were told an interesting thing by the guide although we haven't been able to verify it yet.  The brickwork of some buildings was damaged in the Vietnam war so replacement bricks as close as possible to the originals were made for restoration.  Now here's the thing....  On the inside of the buildings, moss and fungus grows on the replacement bricks but there's not a trace on the originals - a clear sharp line where old and new join.  Allegedly, science has not yet explained the absence of growth on the original bricks. 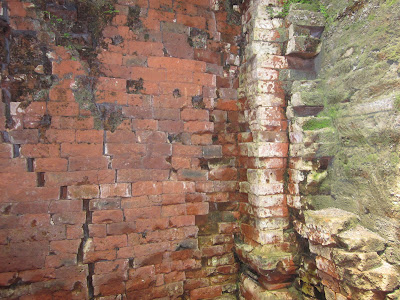 Moss and fungus to the right, not to the left 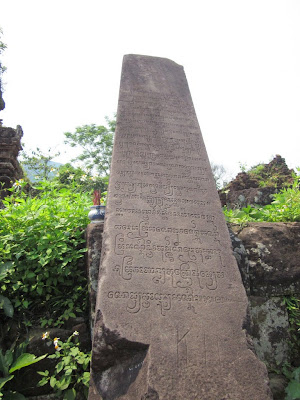 It might have been punishingly hot at My Son, but we wouldn't have missed it for the world.  What a privilege to see the intriguing product of an ancient culture from another part of the world.

Returning to Hoi An, I photographed the bikes below sitting outside the hotel next to ours.  They're Russian-built Ural outfits owned by the hotel for hire or running guests to and from town - how cool is that!  Apparently, the hotel is run by a Frenchman with a passion for bikes. 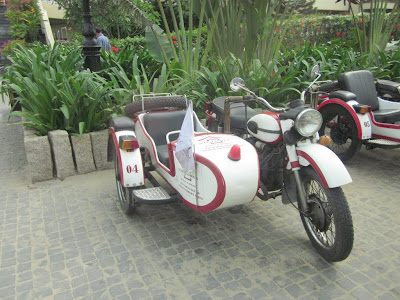 I took the photo below to show a Hoi An pedestrian crossing sign.  I thought that the stick figure depicted me perfectly on our first day in Vietnam.  Like a possum trapped by headlights as the avalanche of traffic zoomed past on either side! 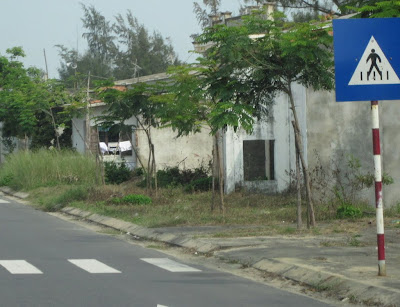 Traffic in Vietnamese cities is frightening.  There's a lot of it for starters, travelling at different speeds and the centre line of a 2-way road is purely advisory.  If there's a clear space on the other side of the road which permits an overtaking manoeuvre, then you use it, even in the face of oncoming traffic not too far away.  Constant use of horns is not a show of aggression but merely to advise slower traffic that there's someone coming past and to maintain position.  Use of Vietnamese overtaking manoeuvres and the constant use of your horn in the west would either get you arrested or shot in a fit of road rage.  The reason this doesn't happen in Vietnam is enshrined in one word.... TOLERANCE!  There are so many vehicles on the road in Vietnamese cities that keeping a two-second gap from the next vehicle and sticking to a predictable path of travel would simply cause gridlock in seconds.  I presume that the driving style has evolved as a pragmatic solution which suits the easy temperament of the locals.  We saw very few accidents, none serious because of the relatively slow pace in cities and motorcycle accidents seemed to happen as a result of abnormally high centres of gravity from the colossal loads they carried!   The only true accident we saw was in Hanoi when a state-owned true socialist car (A Bentley Continental GT... just a wee sly dig at the socialist choice of vehicles) clipped a bicycle piled high with charcoal bricks.  It didn't look particularly serious and we got the impression that the young driver might not have stopped had it not been for angry cyclists surrounding him and pointing back to the fallen rider.  Maybe it was his Dad's car and he anticipated the world of grief that would inevitably follow.

All too soon, our time in central Vietnam had passed and it was time to fly down to Giau's home of Ho Chi Minh City.  Locals still call it Saigon, which was good enough for us.  See the next thrilling episode!