Chain lubricant and tyres - a couple of product reviews

DUPONT CHAIN LUBRICANT
Back in February, I bought a can of DuPont Multi-Use Lubricant to try out on the Street Triple chain. Up to then, Motul chain lubricant had been the long-term favourite.  The Motul did have one drawback though.... it flung sticky black residue onto the wheel rim, underside of the chain guard, rear of the numberplate and annoyingly; it baked onto the underside of the high level mufflers. Solvent was the only way of shifting it.  Oh yes, and it gradually built up in the engine space ahead of the front sprocket and gradually oozed down the hot engine.  Nothing like getting sticky grease onto your cleaning cloth to trigger a burst of bad language! 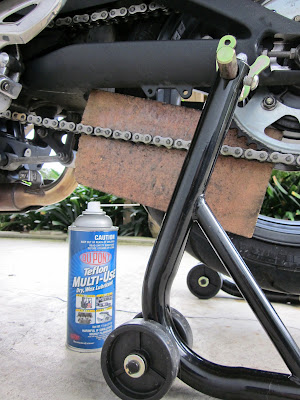 DuPont Multi-Use Teflon spray
Fellow blogger Sonja also used the DuPont teflon product and said that she's well-pleased with its performance.  After 3000 km of its use, Sonja's comments are spot on.  Firstly, there's no fling which is just wonderful - no more use of solvents before getting out the soap suds.  Secondly, the chain doesn't pick up dirt, staying clean and bright as per the photo above.  Most importantly, does it do the job of minimising chain and sprocket wear?    Well, maybe 3000 km isn't much of a test but if we accept that component wear is one  contributor to chain slackening, there hasn't been any need to tension it in those 3000 km.  The signs are all good!  Price is a touch more than most other top end brands.  Although NZ$30 per can (~US$23) isn't cheap because of the relative lack of competition in our market, it still will last a decent length of time.  Oh, and the rear paddock stand bought earlier this year makes chain lubing so much easier than the old method of wheeling it along and spraying a section at a time!


AVON STORM 2 ULTRA TYRES
Now if I see a motorcycle forum post about "Which tyre is the best?", chances are I'll pass it by as there's more bulls*it spouted about tyres than virtually any other bike topic!  Talk about people getting hot under the collar and arguing the toss without presenting any reasonable evidence to back up their claims!  I also have some reservations about the validity of motorcycle magazine track testing in relation to a real world environment.  Truth is that virtually any tyre made by the major manufacturers will meet the requirements of the road riding community.  They will all have their particular strengths, drawbacks and "feel" but the real trick is matching the tyre to your environment and style of riding. Let me give you give an example.

The Street Triple came equipped with French-made Dunlop Qualifier sport tyres.  Gripped like heck in the dry but felt slightly vague on corners in the wet - fantastic performance overall though.  Started to lose their profile shape before 4000 km and the bike felt like it wanted to drop in than progressively roll into a bend.  Rear tyre was worn out at 6000 km and the front hoop still had plenty of tread, but worn badly out of shape.  See the photos towards the bottom of this link to a previous post on tyres. However, the Qualifiers were a sport tyre and overall life is maybe about what you'd expect for a soft compound when ridden fairly hard.  The distinct change in shape and "feel" at around 4000 km was a bit disappointing as they didn't feel right for the rest of their life, but they did their job pretty well overall.

I replaced them with the Avon Storm 2 Ultra sport-touring tyres for a couple of reasons.  I wanted a bit more longevity than a pure sport tyre because of some longer runs which had been planned and I'd long been a fan of Avon tyres on my Blackbird, particularly in terms of superb wet weather performance.  The Storm 2 Ultra is a relatively new tyre which owes more to the Avon VP2 sport tyre than it does to the old Storm ST.  It has dual compound construction, harder in the centre and softer towards the outside for improved grip.  It also has other interesting features which can be ignored for this review.  I'm pretty sure that the dual compound helps to maintain the profile for a bigger percentage of tyre life too, but more on that later.

WEAR
I've just passed the 8000 km mark and both tyres still have plenty of tread.  The rear will last for at least another 2000 km and the front considerably longer than that.   Rear tyre pressure is set at 39-40psi.  Incidentally, I never use a gas station gauge to set tyre pressures.  They're notoriously inaccurate and always carry my own fairly expensive digital gauge. 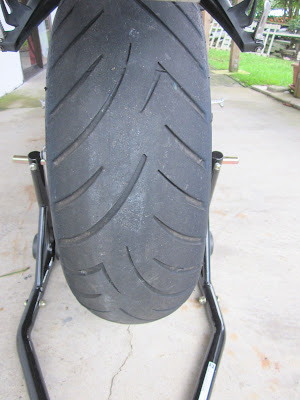 Rear Storm 2 Ultra at 8200 km
It can be seen from the photo above that there's plenty of tread right across the width of the tyre and more importantly for the sake of handling, the wear profile is pretty even with no significant flat wear area in the centre.  Ok, so the Triple only weighs ~170 kg and I mainly ride on twisty roads but it's still pretty darned good for 8000 hard km.

The photo below shows the front tyre with slight evidence of "triangulation"/flattening on the edges of the front hoop.  If I have to change it at the same time as the rear because of that wear becoming more pronounced, it won't be a big deal.  Maybe I could afford to raise the front pressure from 36 psi to 37 or 38psi in future to reduce any risk of significant carcass deflection, but the former figure was the tyre manufacturer's recommendation for this bike.  Countersteering is also probably a significant contributor to the front tyre wear given the extremely twisty roads with coarse chip that I ride on.  By comparison, the Blackbird was a heavier bike with a weight-forward bias and more conservative steering geometry, so the recommended pressure was 42 psi. 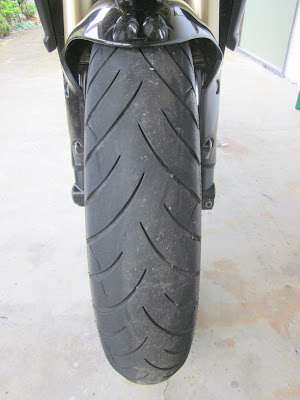 Front Storm 2 Ultra at 8200 km
Note a hint of flattening off on the sides
A final comment about rate of wear.  It's hugely dependent upon where you ride, how you ride, the weight of the bike and a few other factors like how good your suspension is etc. It's noteworthy that a top aftermarket shock on my Blackbird added nearly 2000km to rear tyre life.  A great excuse to get permission to go upmarket!!!

The only valid comparison is where most of the contributing factors are pretty constant such as on your own bike and the area you mostly ride in.  Expect other people from other areas to have completely different results in terms of tyre life.  If you mainly tour, then tyre life is probably going to be a sight more important than someone with sport tyres who enjoys trackdays or caning it in the twisties!

HANDLING
Let's deal with wet weather first.  They are fantastic and support Avon's deserved reputation for being great in the wet.  I've had the odd small slide over wet tar snakes and the like but they've been utterly controllable.  There's really nothing to say apart from them being totally confidence-inspiring.  In the dry, they are as confidence-inspiring as the Dunlop Qualifier tyres the Street Triple came equipped with.  This may well be because although I like to press on a bit, I'm probably still well within the design parameters of the tyre on most occasions.  That speaks volumes for modern tyres.

The other thing I've always liked about Avon tyres is that they tend to roll in rather than drop in.  This characteristic, combined with them retaining their profile for a big percentage of their life; also adds to rider confidence.

WHAT NEXT?
The Avon Storm 2 Ultra tyres completely suit my "fitness for purpose".  Fantastic in the wet and more than sufficient for my road riding ability in the dry, even when pushing a bit.  They "feel" great too.  That suggests that I'll simply replace them when the current ones are stuffed.  There is a slight chance that I'll fit the Avon VP2 sports tyres with the softer compounds which I had on the Blackbird in the last year of ownership.  If I do go this way, it will only be for curiosity about comparative grip and life rather than real need. You depend heavily on tyres to keep you safe.  It's false economy to skimp.