The other petrolhead in the family

My C.E.O has always been a terrific pillion passenger.  Would hardly know Jennie was there, apart from the fact that she also acted as a human Speed Governor with a whack on the helmet or prod in the ribs if I was getting a bit enthusiastic for her liking. A rather public bollocking out the front of a biker cafe/pub for excessive speed a few minutes earlier with a couple of dozen riders and their significant others laughing their heads off  will remain burned into my memory forever.  Be that as it may, there's still no-one I'd sooner have on the back - absolutely unflappable and almost telepathically connected to what I'm going to do. 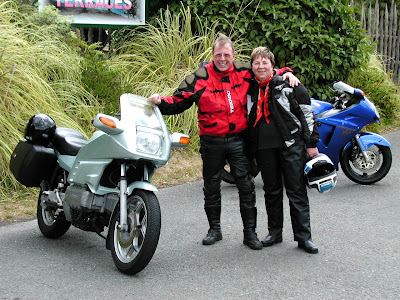 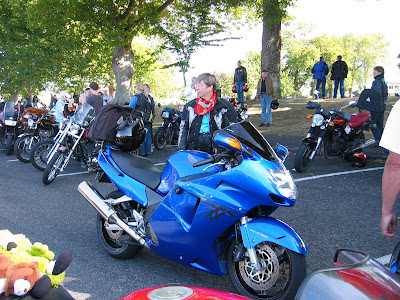 With the Blackbird on a charity toy run
Jennie's prowess isn't just limited to pillioning though, oh dearie me no!  A few years ago, we spent nearly a month touring NZ's south island by car.  We were staying in Queenstown, NZ's adventure capital and I saw an advertisement for going on a quad bike ride into the mountains.  Jennie wasn't at all keen but after some pouting and generally childish sulking on my part, she reluctantly agreed to come along.  I'd assumed that they would be docile farm quads but when we arrived at the base camp, they turned out to be Polaris 2 stroke screamers with a pretty narrow power band - oh hell!  Cowardice prevailed and I kept my mouth shut.  The guide / instructor was superb and gave us both a bit of practice on undemanding terrain first with Jennie taking to it like a duck to water.  Going into the mountains proper she absolutely lapped it up and on one scary downhill section littered with boulders, she was sticking with the instructor and pulling away from me like there was no tomorrow; a perfect example of where your mental limits are set - what a girl!!! 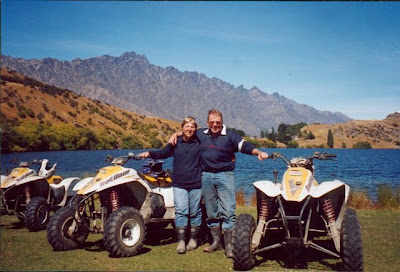 The Remarkables mountain range - NZ south island
When the last of our kids left for university, meaning that Jennie didn't have to drive them to sport or anywhere else; she decided that the boring old Mazda saloon she owned was cramping her style and it was time to get out and have fun.  Fun came in the shape of a Mk 1 Mazda MX5 in British Racing Green, tan leather upholstery and Panasport lightweight mag wheels.  I was impressed with just how much fun they were to drive.  Cornered like it was on rails and perfect for the twisty roads of NZ.   You didn't need to go super fast to have a lot of fun either.  Jennie loved that car and drove it well too. 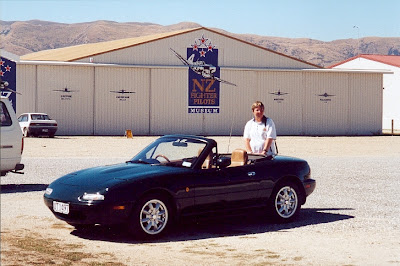 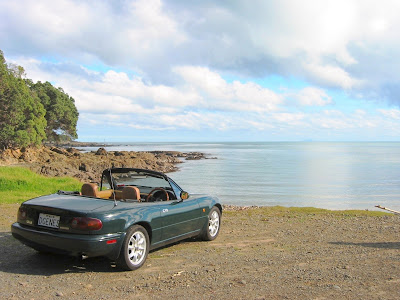 NZ's north island East Cape region
Active island volcano on the horizon
Unfortunately for Jennie, a hip problem was limiting her pillion riding to relatively short journeys on the Blackbird and my solo riding increased.  It didn't dampen Jennie's enthusiasm for driving though and a short while before our retirement to the beach, the question of a later model MX5 was raised as the current one had accumulated a decent mileage.
We knew a reputable local car dealer who sourced low mileage performance cars direct from Japan and asked him to keep an eye out for one on his trips to Japan.  After one or two false starts, we got a call from Tokyo.  He said he'd found the perfect car which was going to auction that very day.  He'd email photos and some details and did we want him to bid for it?  After seeing the photos and specifications, Jennie took about a nanosecond to decide that she wanted it whatever the price.  And she calls me impulsive on occasions!  The dealer won the auction, Jennie was over the moon and surprisingly, we didn't quite have to sell our first-born to pay for it.  This is her baby in rare metallic merlot paint: 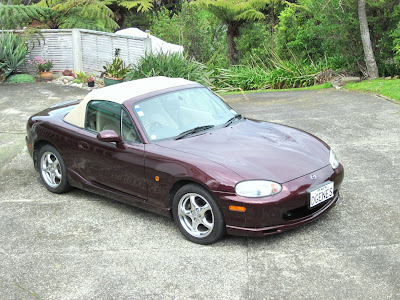 MazdaSpeed-prepared Mk2 MX5
It came kitted with a whole raft of MazdaSpeed performance engine and suspension parts and with only 21,000 km on the clock, it was/is absolutely mint.  The cream leather interior and Bose stereo topped it off nicely.  It goes like a cut cat and the exhaust note is absolute music to the ears!  As per Jennie's first MX 5, she doesn't pussyfoot about in it either!  The eagle-eyed might have noticed the same numberplate on the second photo of the Mk 1 and on the Mk2. In NZ, it's relatively easy to get personal plates and transfer them to new cars.  The plate was a birthday present from me.  Jennie is a keen family historian (genealogist) and the small print at the top of the plate says, "It's all in" and the big letters say "DGENES". Ok???? 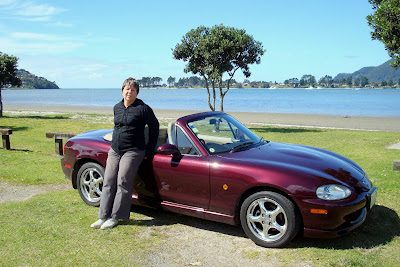 One happy lady - the secret to staying forever young!
The additional good news is that with Jennie's hip problem now resolved, she can resume being the passenger in a million.  However, she's made it clear that Hell Will Freeze Over before she scrunches up on the back of the Street Triple but she's quite enthusiastic about a cruiser or a trike.  As I'm not ready for either, it'll have to be travelling together in the Mazda for a wee while yet, haha!  Oh yeah, and I'm occasionally allowed to drive it provided I keep it clean and serviced.  Generous of her, isn't it?
Posted by Geoff James at 14:05