Among the motorcycling fraternity anywhere on earth, the sense of community is pretty strong.  Two complete strangers on bikes meeting up at a remote spot is almost always a cue for a friendly conversation, irrespective of background and the type of bike.  About 10 years ago, I came across a patched gang member miles from anywhere whose bike had broken down.  Thought hard about stopping but did anyway, not without some worry.  Turned out he had a broken throttle cable and I was able to make a temporary repair and get him going again.  He was desperate to pay me with money or drugs (!!!) but we settled on him paying it forward if he found anyone in a similar position.  It made me think at the time that with the pace and culture of modern life, outside of motorcycling; perhaps some of that spirit in the world has ebbed away over time.

It was a post today by fellow Kiwi blogger Nick which made me think about the subject again.  He remarked that his elderly Mum and Step-father have been volunteers, delivering Meals on Wheels to senior citizens for several decades.  Jennie and I are volunteer computer tutors for senior citizens in our area of the Coromandel Peninsula and sometimes, we struggle to run courses because it's so hard to get more than a couple of people together at a time.  Must admit that it's been extremely frustrating and we recently tried to find out the reasons for the apparent apathy.  The reasons were rather humbling actually!  Despite an average age of maybe 70, virtually all these people belonged to several community support organisations of one sort or another and time certainly didn't weigh heavily on their hands with all their commitments!  The old saying, "Give a job to a busy person to get it done" was never more true.

We've only lived permanently in Coromandel (pop.1500) for just over 3 years and it's taken a fair bit of that time to realise that the huge amount of voluntary work behind the scenes is what makes it such a special place to live. 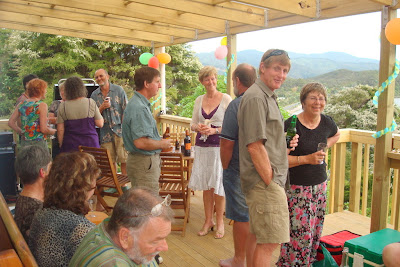 Community BBQ at our place 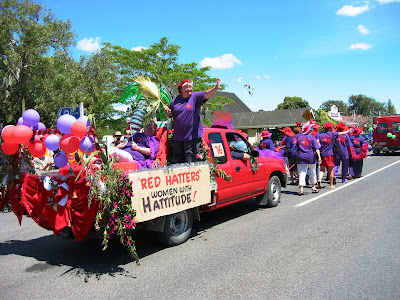 Coromandel Community Xmas parade
Coming back to motorcycling and the sense of community among us, I wonder if that makes us more predisposed to voluntary work (even in the motorcycling field) as we get older and our lives become more settled?  Food for thought maybe....
Posted by Geoff James at 15:38