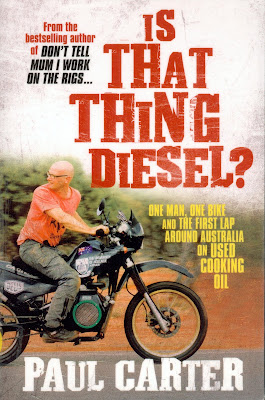 The cover of the book in question

Paul Carter is the stereotypical portrayal of an Aussie male - larger than life, a bit rough round the edges, absolutely up front, supremely resourceful and a wicked sense of humour.  Could be Crocodile Dundee we're describing here apart from the fact that Paul is real!  He spent what might be described as his formative years working on oil rigs round the world and during the process, was surprised to discover that he had a considerable literary talent.  I've read his accounts of working on the oil rigs and the lunatics who worked with him and have literally come close to wetting myself in embarrassing locations.   He's also a keen biker, although that doesn't receive a lot of coverage in those books.

Anticipating a wet weekend, I took myself off to the public library and was delighted to find a copy of his latest book - the cover of which is shown above.  It's the story of his ride round Australia on a bike originally built by Adelaide University students for an alternative fuels challenge, consisting of a Cagiva adventure bike rolling chassis and a small single cylinder diesel pump engine running on used cooking oil to propel it along.  With a top speed of 70km/hr and vibration on par with a road compactor, you just know this is going to be one heck of a tale!  Oh, and the bike was prepared for the trip by the Australian main branch of Deus Ex Machina - you may have seen my 2 blog posts on the NZ branch of these extraordinary motorcycle builders.

Paul is one of those rare writers who describes things so well that it's easy to believe you're there too.  His enthusiastic but unhinged approach to things marks him as a "man's man" whom guys will immediately identify with.  Women will identify him as possessing the very worst, irritating and excessive traits of their partners!  This isn't some tale of  a mega-expensive Ewan McGregor and Charley Boorman-type ride, it's done on a shoestring with some help from a few odd mates (the emphasis being on ODD) plus some family members. 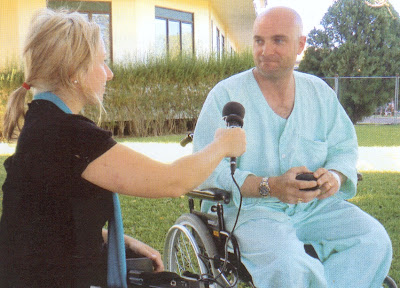 The conclusion to an unbelievably funny incident!

Paul's self-deprecating writing style  makes you immediately identify with the predicaments he continually finds himself in.  In my case, it's usually the most embarrassing ones!  I'm not going to spoil it for the potential reader but there's one incident in a hospital where Paul is stiff all over following a spill from the bike and moving about with the aid of a walking frame.  Why is it that all medical staff seem obsessed with bowel movements??  He's been put on a diet of prunes for over 24 hours.  Whole prunes, puréed prunes, prunes with a side dish of prunes - you get the picture!  At a completely inopportune time, they start to work as intended and what happens next had me crying with snot running out of my nose and ribs hurting.  One of the funniest and perfectly-painted mental pictures I've ever encountered and that's just one incident in this brilliant book.

The twists and turns in the book will probably awaken a deep-seated need to go and do something completely daft on two wheels so don't blame me if that happens - you've been warned!!  If you enjoy it (and you'd have to have had a humour bypass not to), go and get the biographies of his oil rig days too - you won't be disappointed.