Last week, Philip McDaid, Chief Examiner for IAM emailed me to organise another check ride and we settled on yesterday (Monday).  As an aside, he mentioned that a member from Christchurch in the south island who had come north to pick up a new bike would be with us and we arranged to meet in the village of Clevedon, just to the south east of Auckland 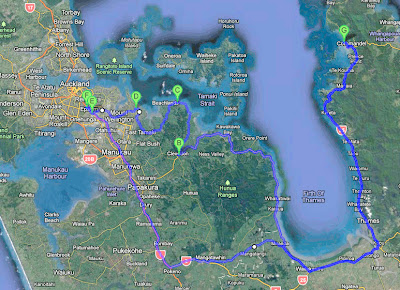 A nice 370 km round trip from Coromandel

On Sunday, the weather in our area was appalling with torrential rain and gales.  The forecast for Monday was for the high winds to remain but the rain should ease back to heavy showers.  Heck, not the sort of conditions to be examined for precision riding but no point in trying to back out because riding well in adverse conditions is part of the whole point of raising your skills!

Wake up early and check the weather - everywhere is wet and it's heavily overcast but not raining at present.  Have breakfast, wheel the bike out of the shed and bugger.....down comes the rain in buckets.  Can hardly see the mountain range across the harbour from our house.  Oh well, it will be a good test of my new Michelin Pilot Road 3 tyres. 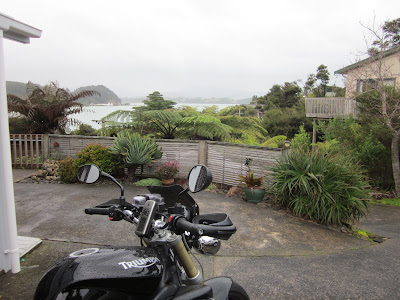 On with full wet weather gear and set off down the coast road.  A lot of vigilance is needed as all the rain from Sunday has washed a smear of clay off the cliffs onto the road in places.  I can also see the rainbow colours of spilled diesel on some of the hills - probably an over-filled truck tank, but no dramas. It's a different story crossing the Kopu bridge just south of Thames.  The ancient long bridge is a narrow single lane, uneven surface and currently wet with a strong, gusty crosswind.  It's a bit hairy on 2 wheels and a relief to cross it without major incident and roll on the opening of the new bridge next year!  Nerves are increasing with the prospect of a check ride in wet, slippery conditions.

The rain sets in with a vengeance but it's the crosswind which requires the most concentration.  At least the visibility through the visor is good having applied a coating of Rain-X before setting out and it's really doing the business in dispersing the droplets.  Up the western side of the Firth of Thames, the wind is more on the nose which is a relief and half way up at Kaiaua, the rain stops and a bit of blue sky appears - yayyy! No more rain for the day. 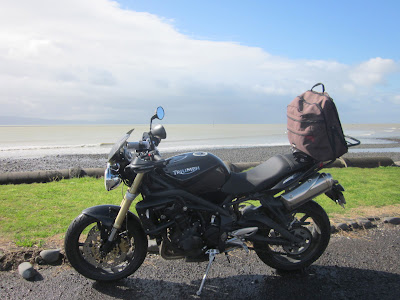 The remainder of the ride up to the Clevedon meeting point is on wet, twisty roads but mainly sunny skies which is heartening apart from a small rear end slide on one corner - no obvious cause but not particularly alarming either. Meeting with Philip in Clevedon, he introduces fellow IAM member Duncan Seed who is the proud owner of a new Buell XB12 Ulysses. This is the first one I've seen and it's a really attractive bike.

Philip then springs his surprise - Duncan is a qualified advanced  instructor on cars and trucks and is also an IAM Observer on bikes.  Furthermore, he'll be taking my check ride today and Philip will be observing us both.  Actually, Philip did ask whether it was ok, but knowing what a great bunch of guys the Observers are and the fact that they donate their time for free, why would you say no?

After some refreshment, Philip equips both of us with radios.  Reception is a bit patchy so he gives me general directions for the ride and as a fall-back, to watch for his indicators in my mirrors coming up to intersections if I don't hear the radio instructions. Oh no, I'll have enough on my plate without looking for Philip two bikes back, but he assures me that if I take a wrong turn, it's no big deal. 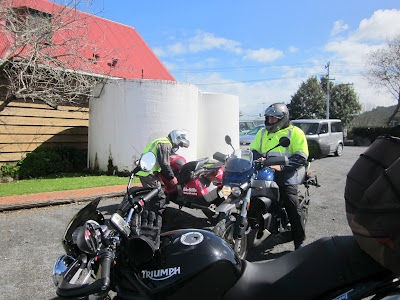 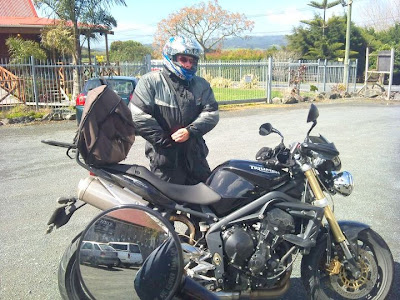 The first leg from Clevedon through Maraetai is down narrow, winding country lanes not unlike the area in which I live.  No nerves from being observed and feel pretty comfortable that I've done a decent job.  As we approach the built-up suburbs near Howick with multiple roundabouts, I realise that the radio instructions are becoming very difficult to hear.  The outcome is a bit of sensory overload, looking where to go next, managing the heavier traffic and I mis-indicate a couple of times which is embarrassing.  Shortly afterwards, we pull in for the first debrief.  Absolutely over the moon to hear that my rural riding was spot-on in all respects.  The only comment was that in the built-up area with lots of parked cars on the roadside, I should move even further towards the road centreline to minimise risk from doors opening, cars suddenly pulling out etc.  Absolutely fair comment.

Philip swaps batteries on the radio and suddenly, we have great reception!  The next part of the journey towards the suburbs of Ellerslie and Penrose involves riding down a road with two, and sometimes three lanes in each direction.  This is where my relative lack of experience of riding in big city traffic in unfamiliar territory shows up.  I know that the 3rd lane in some places leads off to other suburbs and we need to go straight on.  To make life a bit easier for myself, I stay in the outer "through" lane in some places where I should really be staying left as far as possible, but most of my focus is on not getting lost!  I feel a real surge of pride when Philip comes on the radio to compliment me on a slow speed approach to stationary traffic at traffic signals which allows me to continue riding rather than come to a halt.  Feedback like that is great because it cements the technique in place.

From Penrose, we head to McDonalds in the suburb of Greenlane for a coffee and the full debrief of the ride.  Duncan reminds me of the near-centreline positioning in town traffic but says that my positioning after he'd mentioned it last time has been fine since then.  The other thing I need to watch is the 2 second following distance rule. Although my positioning in city traffic relative to the vehicle in front was apparently good, I tended to close the gap a little on some occasions.   Duncan also raises the need to use the left hand lane on dual carriageways more when appropriate - all excellent advice.

Both Philip and Duncan are really pleased with my riding and say that the items raised fall into the "nit-picking" category (their words, not mine!) but riding at a high level all the time is the expectation when you reach this standard. Philip then goes on to say that I'm pretty much ready for a cross-check by another observer prior to sitting my full membership test.  In the meantime, I should take the opportunity to work on the items raised on rides with my mates Roger, Bob and Andy who are also undertaking advanced training.

Two hours to ride to Auckland, two hours being observed and two hours home - another magnificent and totally fulfilling day; if not just a touch mentally exhausting!

Just reflecting..... getting to full member status of the IAM, let alone reaching Observer is an incredibly demanding process where the bar is set very high and there are no short-cuts or concessions.  In today's world with a preoccupation tending towards instant gratification and not particularly demanding standards, it's a real privilege to have found something which both stretches you and gives such huge benefits all at the same time.  I might also add that it also makes the generally low driving (and riding) standards in this country rather more apparent.  Even worse, it also highlights the low expectations of the authorities in terms of appallingly low requirements to get a licence.  Maybe it's the same for much of the world but I'll reserve a decent rant on the topic for another time! 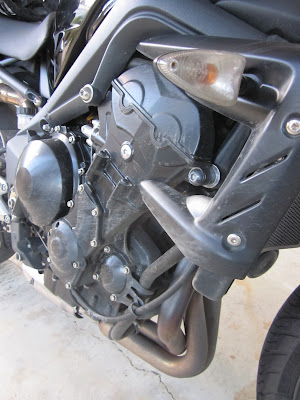 Something is in need of a couple of hours TLC after yesterday!