It was Jennie's birthday last Friday and our kids, bless 'em, wanted to share in it so we were away for a couple of nights enjoying their company.  We're truly blessed in that not only do we have a fantastic relationship with our kids, their partners are wonderful people and great mates too.

Friday saw Jennie and I drive to Auckland via the scenic route, stopping for a lazy lunch in a little village and then exploring the waterfront east of Auckland city.  Not only does the city itself have a beautiful, big harbour but you can get to some lightly populated beaches within a 40 minute or so drive. 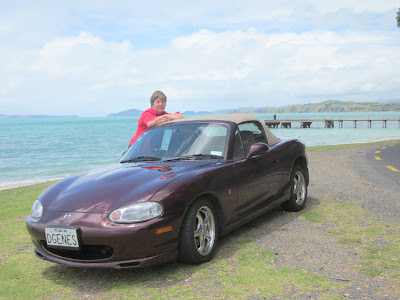 Maraetai Beach, near Auckland
hardly a soul about! 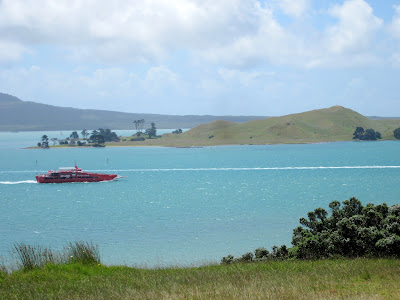 We stayed with our younger son and daughter-in-law and on Saturday, Jennie took off for a marathon shopping session with our Auckland-based daughter (6 hours - a guy would be demented within the first 30 minutes, haha), whilst I headed into the city with our son and D-I-L to look at car baby seats for their imminent arrival.  Enough of this domestic stuff, other than to say that crikey, there are some real high tech devices available in the baby market these days.  Recaro, long-time manufacturers of internationally-renowned sports car and rally seats have tapped into the child restraint market.  By the prices they charge, I'd imagine that the child market is their biggest profit centre!!!

The title of the post isn't 100% accurate as I needed to visit Auckland's premier motorcycle accessories store to pick up a new Pinlock anti-fog visor insert for my helmet.  The old one had lasted for the best part of 4 years but was getting slightly scratched which caused a bit of starring at night.  This was my first visit to the current location and I was impressed with their service and range of products.  A bike on a display stand caught my eye - this is it: 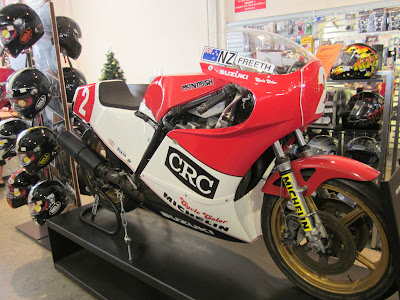 Anyone around the world who has a strong interest in classic motorcycle racing will know the name of Kiwi engineer Ken McIntosh who is one of the world's top restorers of Manx Nortons.  However, his talents were, and still are much broader than that.  In the early 1980's he collaborated on a project with an extraordinary rider, Dr Rodger Freeth.  Rodger Freeth was a senior lecturer in Astrophysics at university in Auckland who brought the rigours of science to the art of motorcycle riding and racing.  The McIntosh Suzuki F1 superbike was the result of this collaboration and it's fair to say that it pretty much won every race it took part in for a few years.  Its speed was devastating and in 1983 at Bathurst in Australia, it was clocked within a fraction of 300 km/hr!  What a privilege to see it again after all this time.

After the shopping, it was time to drive to the Auckland waterfront for lunch.  Driving through the suburb of Ponsonby, this old building took my eye.  It looks like the odd wedge shape design was to deliberately fit into the tight intersection between two roads! 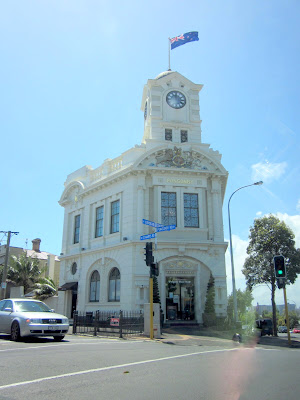 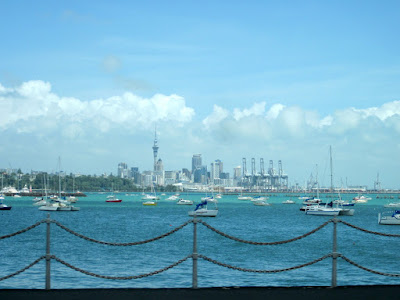 A long lunch at the waterfront suburb of St Heliers followed.  Great service, great food and a favourite pastime of people-watching!  The "hill" in the background of the photo below is Rangitoto, an extinct (we hope)  island volcano in the outer harbour which was formed some 600 years ago.  A bit recent for my liking! 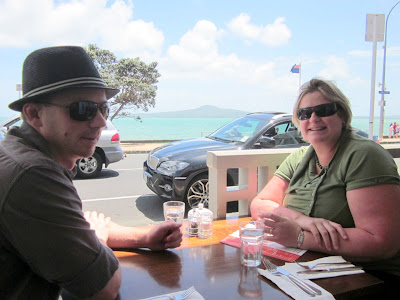 Our younger son and daughter in law waiting for lunch

Jennie's Xmas "shop 'till you drop" trip was a spectacular success from her viewpoint  inasmuch that the spoils wouldn't fit in her sports car for the trip home so it's a good job we'll be back in Auckland next weekend for another function with the 4x4!  That evening, we all went out for a Chinese banquet in the suburb of Kingsland.  A very ordinary, even slightly down at heel frontage with plain décor inside.  However, the clue to the wonderful reputation of this place for authentic cooking was that most of the patronage was Chinese.  Suffice to say that it was reasonably-priced, exquisite tasting and in quantities which defeated us. Special honours go to the Salt and Pepper Squid dish for anyone who is motivated to visit the Canton Cafe!

Sunday brought yet another special family occasion with a drive to the city of Hamilton to attend the baptism of our gorgeous grandchildren from our eldest son and partner .  Four other families were taking part  in the ceremony and it was an absolutely delightful occasion with all the children behaving impeccably!

All in all, a wonderful weekend and one largely without bikes too!  As a fabulous postscript, our daughter sat her final examination this morning (oral in front of a high-powered panel) for professional registration as a clinical psychologist.  She rang a short time ago and from her comments, it sounds like she aced it.  Unbelievably proud parents!