Your pet hates about car drivers? 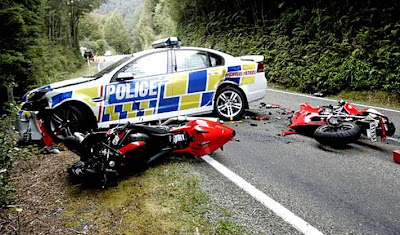 Just before Xmas, a British motorcycle website ran a survey to determine what were the pet hates among its readers with respect to car drivers and their annoying and dangerous habits, plus being on the roads in general. Some of the habits listed and their ranking surprised me a bit and I got to thinking that maybe, there are bad traits which vary according to where you are in the world and even regional differences within a given country. 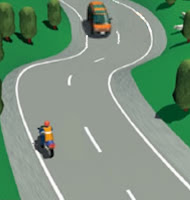 I live in a region of NZ which is a biker's paradise - hardly a straight bit of road anywhere.  On just about every ride I do in the area, there's at least one dozy knuckle-dragger on a blind or obscured bend partially on my side of the road coming towards me.  By the look of surprise on their faces, it's as if something coming the other way is the last thing they're expecting and I have no right to be there.  If there's time, I point them back to their side with an explicit gesture to demonstrate disapproval.  Laziness on their part? Failure to comprehend the potential consequences?  Generally public antipathy towards setting good standards?  Dunno, but it really makes my blood boil.  It's not just oncoming traffic either - if you're setting up for an overtake, traffic in front of you will often drift over the centreline on a shallow bend or even on a straight.  It's particularly noticeable at weekends and with the Coromandel Peninsula being a tourist area, I suspect that there's an element of people from other regions simply not knowing how to drive well on twisty roads.  Morons!

Something else I've noticed round this way which is both amusing and tragic at the same time.  Some of the worst corner-cutters are 4x4 drivers towing boats.  But wait - there's more!!!  If the driver is a solidly-built gentleman (oh all right, a fat bastard) wearing a baseball cap, a moustache and just a singlet or cutoff T shirt, you can bet your last cent he's going to be one of the worst offenders.  N.Z riders - just keep your eyes peeled and see if I'm right!!!

To me, corner-cutting is the No 1 pet hate by an awfully large margin. 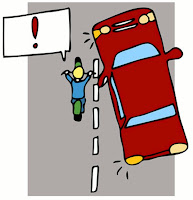 Ok, whilst this is a perfectly true annoyance, it's not a single specific fault so I'll plump for failure to observe the rear.  By the number of dumb things people do when I'm closing on them from the rear, it's clear that on many occasions, they have no idea I'm there.  I suppose that mirrors are for checking out how they look wearing the latest Oakleys rather than the intended purpose.  However, with judicious positioning and having upgraded my headlight bulbs, I must admit that they see me a little earlier than they used to.  Probably don't like the dazzle in their mirrors, even in daytime.  Car drivers doing shoulder checks/lifesavers?  Don't make me laugh, the incidence of drivers actually swivelling their heads to take a good look is as rare as rocking horse poo!

Truck drivers as a group are excluded.  The ones round our way are extremely courteous and professional.

The other thing I've noticed is that I'm definitely spotted earlier when wearing a hi-viz jacket.  I've got a theory that there's a moment's uncertainty by a driver as to whether I'm a motorcycle cop so they go into best behaviour mode for a nanosecond.  Whatever the reason, I'm downright grateful!  At present, the biggest percentage of riders don't wear hi-viz and I worry that if it's mandated at any stage whether other road users will become blind to them through over-use.

This might be more prevalent in the country areas than in major towns and cities where there would be utter carnage if people didn't stick to the rules most of the time.  However, out in the country, the locals seem to regard the use of indicators as a waste of energy and cut across your bows or turn off in front of you without warning.  The "relaxed" driving style is borne out by the number of country types who drive one-handed with the spare hand dangling out of the window or gripping the roof gutter. It's a fair bet that their thoughts aren't on driving well, more like looking forward to their next puff of weed or a cold beer at the pub.  Most of these idiots fall into the "slow driver" category but it's reassuring to read that the police are giving slow, discourteous drivers special attention too.


4. People who pull out of side turnings in front of you.

Actually, I'm thinking about one particular circumstance and I lied, it's a love, not a pet hate but it does involve angry drivers!  We all know that bikes are great at filtering past queues of traffic.  It seems that more drivers are objecting to bikes coming past when they're stuck in traffic jams, even though the practice is perfectly legal with certain parameters.  Several times in the last year, I've been gently filtering past a queue of stationary vehicles and some clown in a car has displayed colourful mastery of the English language by yelling out "Wait your f*****g turn" or a variation thereof.   Ignoring the abuse probably upsets them more than acknowledging it!

Don't let it influence your personal views, but here are the top 5 from Visordown, the British website:

Let's hear what gets up your nose!!