How it all started

In response to Gary's Flies In Your teeth post, I guess that my story is typical of many riders.  Also like several other bloggers, my early posts are a chronicle of the early days but as many people won't have gone back to the late 2009 posts, I'll summarise the earliest here.

Here's a photo of the earliest remembered association with bikes when I was aged 5 or thereabouts.  I hope that you appreciate the courage it took to post this! 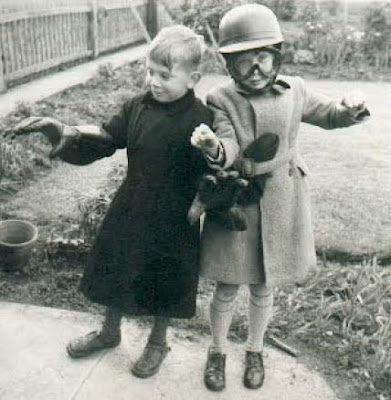 In my early life, Dad spent a lot of time working overseas and kept a 2 stroke James (Appropriate given my surname!) in the shed for running around our Northamptonshire village on when he got home.  If I was lucky, I'd be given short rides and I suppose I was hooked from then on.  Mum was dead against them though as Dad had a serious accident, breaking his jaw.

My conscious memories of bikes surfaced again when I was about 15.  At that time, the UK was heavily influenced by the American "biker rebel" culture and near where we lived was a cafe where the local bikers hung out on their Triumphs, Nortons and BSA's.  As wannabe bikers, we used to go down on our bicycles, complete with ape-hangers and tassels hanging out the end of the bars (more groans of embarrassment!).  The bikers used to put a 45 on the juke box and the challenge was to ride from the cafe, round the town centre and back again before the record finished.  Never mind about antisocial and dangerous behaviour, we  wanted to be just like them!

My first bike came a couple of years later as a reward from my grandparents for passing all my national school exams - couldn't believe my luck!  The fact that it was a Suzuki 50 with about 5 bhp and had the aerodynamics of a house thanks to the massive aftermarket windscreen they bought mattered not one jot - I was independently mobile!  That little Suzuki carried me over several counties in company with close friends on a Lambretta scooter, a Triumph Tiger Cub and an Ariel Arrow.  I'm pleased to say that I still stay in touch with most of those friends and one of them is still riding bikes.

The rest of my early biking history is in those early posts, but just thought I'd repost a photo of me and my Tiger 100 taken at the 1969 Isle of Man TT.  The young lady is Anne McGregor from Glasgow, who was holidaying in the IOM at the time with a friend.  Lovely girl and I hope she's had a wonderful life. (If any reader from Scotland thinks that they know her, her friend was called Rosemary Gilseanan).  It was a source of amazement that she even bothered with me given that my dress in the photo was a green cardigan with a bright orange T shirt, brown cord jeans and suede ankle boots.  I suppose I was the only person in the Isle of Man that thought I looked cool - aaarrgh! 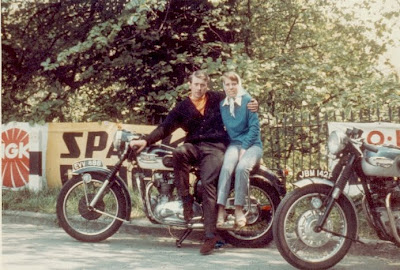