Several things connected with motorcycling have reared their heads this week.

A BOOK
As TV the world over is 95% crap, I read a fair bit in the evenings.  Our public library is superb, particularly for a village of 1500 and I'm always finding absolute gems.  One of the librarians knows I ride and thrust the book below into my hands.  Not to be confused with the Terry Pratchett Discworld novel of the same name, this one is very much grounded on Earth and real! 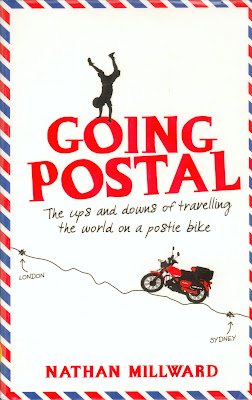 Nathan Millward is a 20-something English guy who has been working in Australia.  Unfortunately, he's overlooked that his visa is expiring in 20 days!  He can either fly home or, in a sudden flash of genius; ride Dorothy,  his well-used Honda CT110 Postie bike .  The CT110 is an institution in Australia and NZ.  Used by  Posties to deliver urban mail, it's also used by the public at large to undertake any insane feat imaginable because of its robust nature.  Including a 30,000 km overland trip half way round the world! 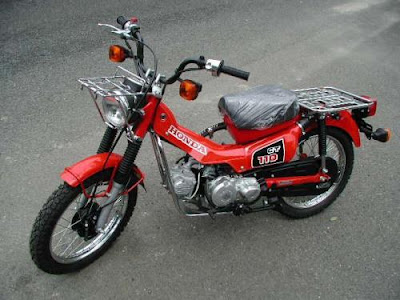 As you might expect, 20 days doesn't leave much time for planning so Nathan takes off with little or no safety clothing, minimal tools, minimal maps and other severe deficiencies which would make the average motorcyclist shudder!  I'm not going to spoil things, but it's the most wonderful example of an unquenchable desire to succeed,  not to mention astounding naivety overcoming some pretty severe challenges.  His honesty in assessing his own feelings is completely disarming.  Very early on in his ride, he's thinking of pulling out and ponders whether pulling out or continuing with the journey will take the greatest courage.  For some reason, this struck a real chord.

His journey takes in such places as Indonesia, Thailand, Nepal and Kazakhstan along the way.  He experiences humanity at its very worst and when all seems lost, he discovers people with virtually nothing save the shirts on their backs who go out of their way to help him.  I couldn't help wondering what I'd do in some of the circumstances he found himself in.

I loved this inspiring book, particularly the clear message that if you want something badly enough, there's normally a way to make it happen.

A BIKE
The second motorcycling-related item this week was on Thursday afternoon  when I was catching up on some emails and heard a motorcycle chugging up our steep drive.  It was clearly a single cylinder and offhand, I couldn't think of anyone who owned one, save for a friend that I knew was travelling in the south island.  When it hove into view, I immediately recognised Paul and Julie, friends of ours in Coromandel.  They'd just bought themselves a restored 1951 Norton ES2 500 and boy, what a beauty!  See what you think.... 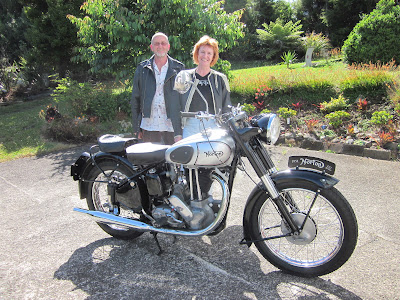 An adjustable spanner, pliers and a screwdriver is all you need!

Paul and Julie are real Norton enthusiasts.  Paul still has a Fastback Commando which he bought new when he was 19 or 20 and it's in flawless condition.  He also has an 850cc very special racing Commando for classic racing events.  Some of the parts are eye-wateringly expensive and he clearly has a wife in a million (or hides purchases in the "household miscellaneous" part of their budget)! 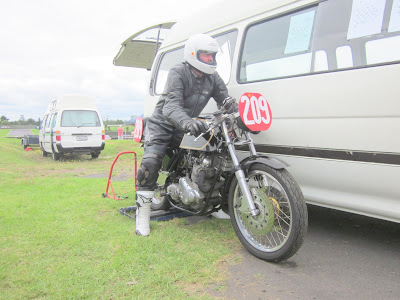 
A RIDE
Today is the last Sunday of the month when upper north island IAM members get together for a ride in the Auckland area.  Up at 0530 for the trip to Auckland and joined by my mates Roger and Andy at the meeting venue, we weren't sure what the day would hold. 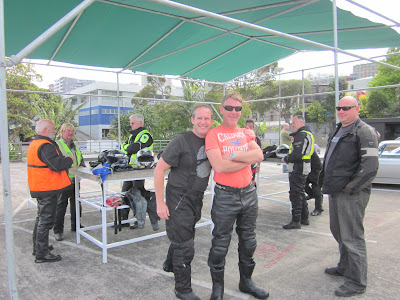 A number of other riders turned up including Matt who was due for his first assessment ride - exactly where I started 8 months ago (feels like 5 minutes)!  Matt rides a Yamaha MT-01, a real torque monster and the first I've seen in the flesh.  1670cc with 150 Nm of torque at 3700 revs - it'd plough a field!  It's one of those larger than life brutal bikes where you can't but help stare. The detail on it is first class. 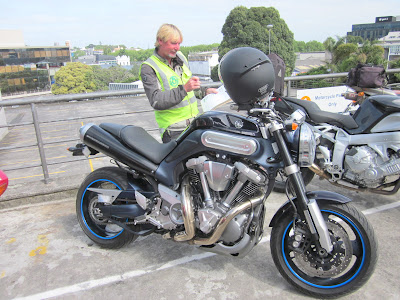 Philip allocates most of the group to another Observer for a semi-social ride and asks me to join him and Matt for the first part of my Observer training.  Initially, Matt goes out front with Philip behind him and me at the rear, checking Matt's riding against the police rider's checklist which is used by IAM.  It's a curious feeling observing someone else. Matt does well with just refinements required rather than serious errors and he's well pleased. 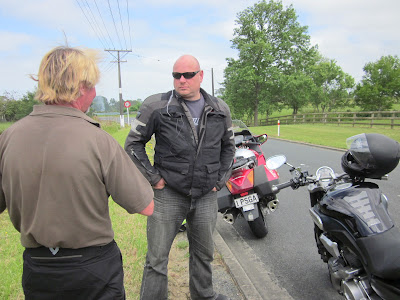 After the debrief, Philip asks me to take the lead to demonstrate  to Matt extreme lane positioning for cornering.  Taken completely by surprise but get through it with no stuff-ups!  I then follow Matt and he picks it up without much difficulty.  The trick is to practice until he gets it right 100% of the time.  Lunch at Kumeu, a full debrief for Matt with a task list of a few things to work on before the first check ride with an assigned Observer to mentor him.  He's got off to a great start and is really enthusiastic to commit to the hard work over the coming months - well done Matt and we'll catch you after Xmas.  Really looking forward to watching someone new taking the IAM training path.

An excellent trip home in light Sunday traffic and sunny skies, arriving at 1500 having covered 460 km.  It doesn't get much better than that!