A lovely afternoon on the road

As regular readers will know, Jennie and I take turns to organise annual vacations to celebrate our wedding anniversary, keeping the destination a secret from each other for as long as possible - sometimes as late as the airport check-in desk which has led to the odd bit of merriment  for one party and consternation for the other!  Anyway, next year is our 40th anniversary, it's my turn and as procrastination is my middle name on these matters; I decided pull finger for a change and do a bit of early research on destinations.  Having got as far as possible without expert advice, it was time to visit the nearest travel agent some 40 minutes from home.

Going on the bike was a perfect way of stopping the CEO inviting herself along, so with a "Going out for a practice run Honey", I was off to Whitianga!  Actually, there was another errand I was keen to knock off too and it involved this: 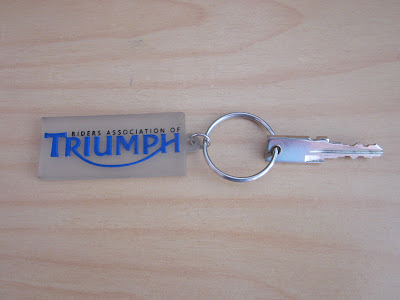 Y'see, I'm down to my last Street Triple key.  Lord knows where they go, but I'm blaming the Automotive Key Elves which are cousins of the Spectacles Elves, both of which live just out of sight in our house and come out at night to wreak havoc when we're asleep. Their malign influence would warrant a tale on its own, but back to the present.....

For some unfathomable reason, the Triumph spare key is a stunted affair without a handle to get a decent grip on.  Trying to grip the ring through thick gloves to turn the ignition on whilst very bad words hang in the air is an everyday occurrence and my patience finally snapped last week.  My friendly Triumph dealer mailed me a Triumph blank to get cut locally.  In my humble opinion, it was outrageously expensive even with no security chip and I shudder to think what a Ducati or MV blank would have cost.  The phrase "Got you by the short and curlies" comes to mind.  There's no key-cutting service in our village that I know of so first stop was at a Mitre 10 hardware store which we've used before for house key spares.  My heart sank when the lady said "That's a double-edged left-hand double DNA helix whatchamacallit".  Actually, she didn't say that at all but it was something similar which meant that for some reason, she wasn't game to have a go despite their profiling machine looking pretty high tech.  She was, however, anxious to help out and told me about a "real" locksmith who had a business in the next block.

Pulling up outside, I just knew that I was going to love the place!  A converted home called Arlingham House with lavender bushes, a nice covered porch and glimpses of old clocks through the open door and windows - WOW, hints of an old-time craftsman!  Here we are: 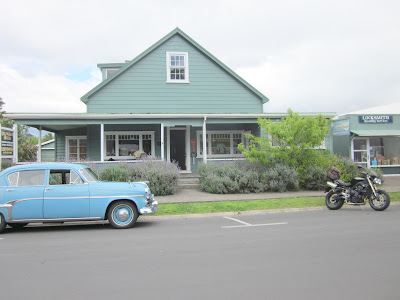 Arlingham House, complete with 1954 Dodge outside

There was an elderly gentleman sitting in a cane chair on the porch.  He told me that the owner was away at lunch and he was just minding the place for him.  Would I like to join him and wait?  I would indeed and sat in the other cane chair to chew the fat with him.  Turns out that he was the owner of the beautifully-restored Dodge saloon outside and had a classic British Ford at home too, both of them getting regular use and I listened to great tales of his trips in them.  Now isn't that light years better than going to a modern hardware store and just doing the business?  Simply no comparison! 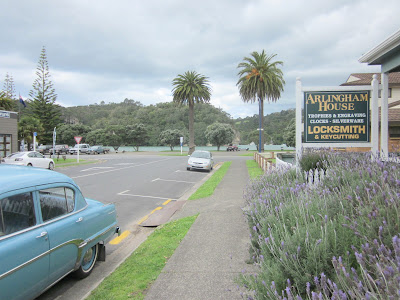 View from outside down to the beautiful harbour 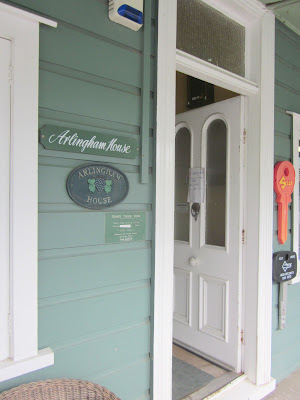 Lovely entrance to the premises

After 15 minutes or so, the business owner showed up and was only marginally younger than his "minder".  Another absolute delight who had a 20 year old mind trapped inside an older body.  It was certainly no effort for him to cut the blank in a matter of seconds.  I didn't actually see him cutting the key as I was too busy gawping at the treasure trove of stuff inside.  He graciously allowed me to take some photos which I'll share with you..... 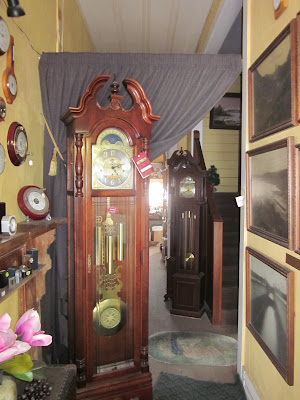 Clocks and barometers of every shape and size
stuffed everywhere

Turns out that he sold clocks and barometers too and also did some restoration - what a joy to behold!  He also had photos hanging on the walls from the gold rush and kauri tree logging days from NZ's history in the 1800's. 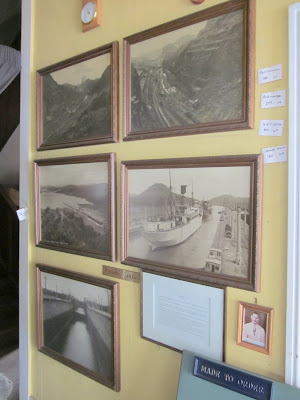 A gallery of social history

When he'd cut my key (the insanely low price of NZ$3), he asked me whether I'd like another "decent" spare with a handle as he thought he had a blank somewhere from aeons ago which might do the job.  I simply couldn't resist taking the next photo as he grovelled among the thousands of boxes looking for it! Amazingly, he found it inside a minute and moments later, I had another key at 1/3 the price of the one with the Triumph logo on! 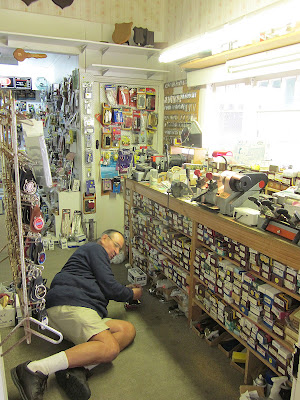 "Now I remember seeing a suitable key about 30 years ago...."

I was really sorry to leave these 2 delightful gentlemen and sincerely thanked them for making my day (making my week more like...) - don't encounters like this lift the soul?

After that, it was round to the travel agent and what might be described as a very productive meeting but that's all I'm going to say for now.  Jennie doesn't read this blog but to spill the beans right now would be tempting fate!

Heading back on the coast road between Whitianga and Coromandel, some dark clouds due to afternoon heat build-up were forming and the chances were that I was going to get rained on at some stage.  No worries though as I was wearing Gore-Tex rather than leather. 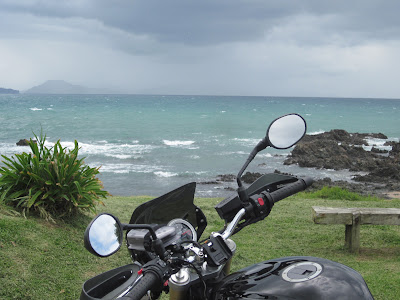 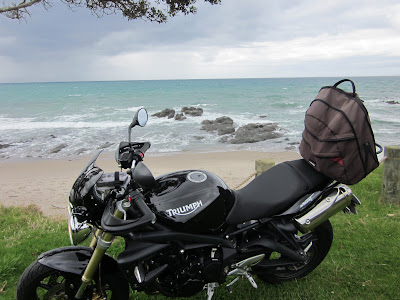 Not much nicer in the other direction either

I did indeed get rained on for a wee while but it didn't even come close to wiping the grin off my face.  An anniversary trip largely sorted, spare keys cut and what a wonderful way to get them made AND a genuine bit of practice for my next IAM test.  Unplanned events like these really don't get much better, do they?
Posted by Geoff James at 18:07