A couple of days ago, I received an email from Philip McDaid, IAM Chief Examiner; saying that it was time for my cross-check ride and what was I doing on Thursday? (today).  The cross-check ride is virtually a mock run under a wide range of riding conditions of the IAM full membership test to ensure that I can consistently perform to the police rider standards which the IAM use as their baseline.  Philip said he was happy to ride down my way from his Auckland base and I thought "Sweet - roads that I'm totally familiar with - that gets rid of a lot of stress"!

We arranged to meet in the historic gold-mining town of Thames 50-odd km down the coast for a pre-ride coffee and I set off this morning under sunny skies and in an excellent frame of mind, although under no illusions that it was going to be a relaxing ride.  Incidentally, in the photo below, the large catamaran moored in the background looks like it has a VW Kombi for a cabin, particularly with the 2 tone paint! 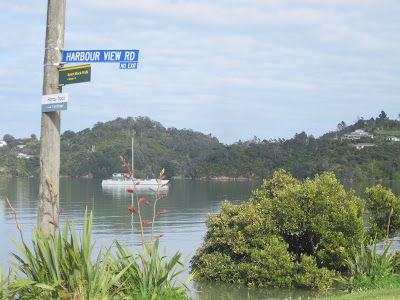 Philip and I met up in Thames and over coffee, my relaxed demeanour changed somewhat when Philip explained that in order to be examined over the wide range of conditions required, we would NOT be riding on local roads, but would in fact be riding back to the Auckland area, using a mix of 2 lane roads, the  Southern Motorway itself and driving in high density traffic in one of Auckland's southern adjoining towns!  I thought I took the news pretty calmly given that the anticipated ride had just turned to custard but must have had a stricken look on my face which explains Philip's triumphant grin!  The shock of an alternate destination with some unknown roads must have caused me to mis-hear some of the route (my story and I'm sticking to it!) but more of that later. 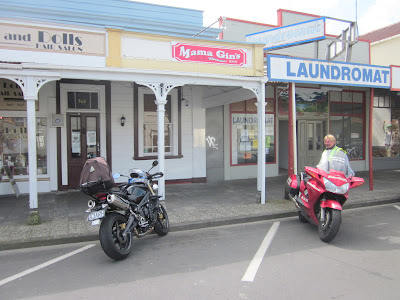 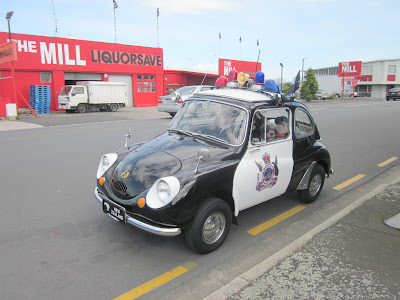 How cool is this?  Thames main street
Painted in Highway Patrol livery 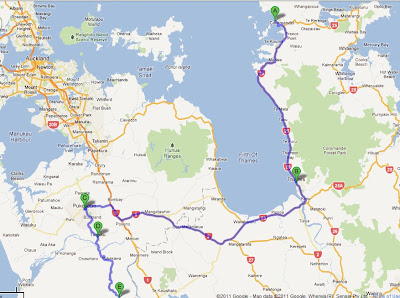 The run from Thames in moderate traffic was really enjoyable apart from part-way along the predominantly 2-lane State Highway 2 when we caught up with a fuel tanker doing about 10 km/hr below the national open road speed limit of 100 km/hr.  This was where the mind games started!!  "Hmmm... I'd really like to get past this but to do so quickly, I'll need to go over the speed limit.  Will Philip ping me for speeding or will he ping me for failing to make progress if I don't - oh heck, what to do?"  Well, he didn't ping me for passing in a brisk manner, but he did notice whilst I was looking ahead for an opportunity that I'd drifted a little closer than the 2 second following rule when there was no need to do so!  Fortunately, I was out to one side of the tanker or the "gentle reminder" might have been a bit more forceful!

Traffic on the Southern Motorway was moderate and I felt completely comfortable with lane positioning, overtaking and situational awareness.  Too comfortable as it happened as my brain had registered Papakura as our first destination, not Pukekohe.  Consequently, I serenely sailed past the Pukekohe motorway off-ramp with not a care in the world until Philip came flying by and indicated to get off at the next junction.  My stuff-up became painfully apparent when we stopped moments later to fit the radio comms ready for the part of the route I wasn't familiar with.  Suffice to say that I felt a complete pillock when Philip said if I'd used my mirrors, I'd have seen him indicating at the Pukekohe turn.  How abso-bloody-lutely humiliating!!! Philip also advised me to look out for "speed creep" on the motorway - easy to do when a fair percentage of the traffic is travelling above the speed limit!

Time for some dense traffic work around the town of Pukekohe which has narrow roads, made even narrower by parked cars.  It also seemed that there were tight radius mini roundabouts at every intersection with traffic coming at you from all angles.  However, all the recent city riding practice must have paid off as it was stress-free with no incidents.  Road positioning well away from parked cars helped no end.  From Pukekohe, it was off south on the narrow twisty rural back roads towards Ngaruawahia.  The conditions are similar to my local roads and I love 'em!  It must have been apparent to Philip too as after 20 km or so, he called a halt to proceedings and said I'd nailed it - YESSS!!!!

Absolutely over the moon, enormously proud and to be perfectly candid, more than a little surprised.  It's really hard to maintain a sense of perspective when you're concentrating so hard and I thought that the fuel tanker incident and missing the motorway turn-off earlier in the day might have cost me dearly at this advanced level but Philip said that he could see that my overall skill level and riding plan was up to standard. Phew!  Back to the Autobahn motorway service station for a late lunch and a debrief, Philip said that he'd be speaking to one of the other IAM Examiners to take me for the official full membership riding test in the very near future.  So between now and then, It's practice, practice and even more practice! 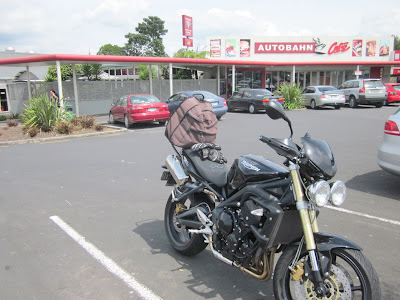 Starving after all the stress!

Sooo.....  370 km for the day, including 2 1/2 hours of minutely observed riding by the Chief Examiner.  Surprising how much it takes out of you and it's likely to be an early night!  It's been seven months since starting out on this journey and it's hard to describe just how much the standard of my riding has improved.  It certainly IS possible to teach an old dog new tricks!  IAM is an amazing organisation where professionals such a commercial instructors, police riders and other people with unbelievable riding skills volunteer their time to help others raise their game - simply outstanding.