Starting to join the dots....

Unlike St Paul on the Road to Damascus, there has been no blinding light to set me on the road to more competent riding - I'm not smart enough for starters to pick up on anything quickly.  It was simply a creeping realisation that were gaps in my riding ability which increased risk. Most regular readers will be well aware of the path I chose to correct this earlier in the year.  When a fellow Kiwi bike enthusiast, Ron Prichard, recently lent me a motorcycle book I'd not heard of; I initially came close to mailing it back with a neutrally-worded note of thanks.  (A euphemism for not initially understanding a bloody word of it for the first dozen or so pages).  This is the book in question: 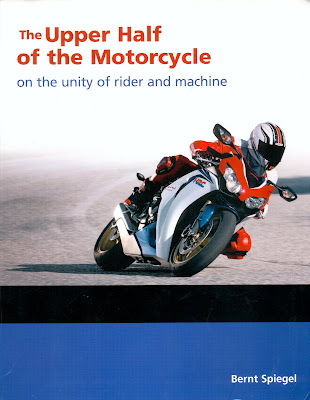 Dr. Berndt Spiegel is a psychologist, has lectured at university and has his own consulting company.  It was his academic writing style about psychological theory which which initially put me off , but the fact that his personal blurb said that he was an enthusiastic motorcyclist persuaded me to persevere and I'm really glad that I did.  It's not an easy read.  Some of his chapters required a "once over lightly" approach to get the gist of it, followed by a slower, in-depth second go.  This isn't a book review as such - it would be very difficult to review properly in such a short post.  However, it's the first motorcycling book I've read which has succinctly explained the reasons behind comments about riding which a lot of bloggers have raised in their posts, including me.  I suppose you could call it "joining the dots" of what we might have thought were unconnected observations about the way we ride, but in fact have a common root.  What I'll do is give a few examples and see if it triggers anything - certainly did for me. The title of the book could well have been called "The Top Three Inches", referring to the impact of the human brain on riding skills.

Let's take that that phenomenon that I've always called "Zen riding", where a rider seems to be on rails and in an almost detached state.  The normal thought is, "Why can't I ride a lot more frequently like this than I actually do?"  Conversely, why is it that when you're super-eager to get out for a ride, you often end up riding quite poorly and stuffing things up?  Dr Spiegel explains very clearly and in a lot of depth how some relatively repetitive tasks are much more effectively carried out at a subconscious level.  By way of example, he cites the simultaneous tasks of balancing the throttle, changing gear, braking and other "routine" components of riding.  Where it tends to go wrong is when these activities get brought into the conscious level where you think about them too much, i.e trying too hard or something suddenly going wrong and so on.  Without going into detail here, quality practice and training is a great way of making sure that routine tasks stay buried in the subconscious level more than they would otherwise do.  An interesting example given which is unconnected with motorcycling involves the great jazz trumpeter and singer Dizzy Gillespie.  When asked about the transition between the trumpet solo and his vocals in a particular song, he was unable to answer the question because it was carried out at a completely subconscious level.  We can all think of things we do which fall into that category.

So what about the conscious self - what do you do with that?  Well, one of the most important things is monitoring for external dangers.... what lies round that bend?  How do I prepare for the unknown?  It all makes sense, yet how many riders do we see who don't construct good mental pictures of potential hazards?  Taking racing lines round blind corners, not moving out from the road edge when an entranceway with an obscured view  is observed and so on.  These monitoring and forward-thinking actions are what are commonly referred to as situational awareness. 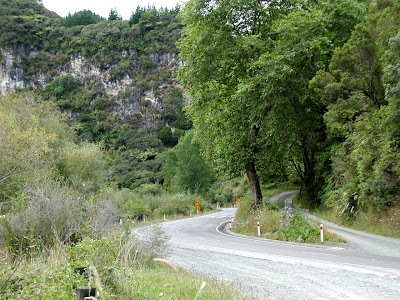 What can't you see?  A car cutting the corner perhaps?  A mob of cattle?
What are you doing to prepare for any eventuality?

I particularly like that all this fits in with my current IAM training but more importantly, understanding WHY things happen is the best way for me personally to lock any learning into place.  This book does it brilliantly.

Another topic which the book covers extremely well is how to become self-critical of your own riding.  The author makes a valid point that downplaying self-criticism certainly soothes a rider's ego but it also throws away opportunities to reduce error and improve.  The chapter covering this topic gives some very practical advice on how to raise your own self-awareness.  It's only when you're honest in admitting to yourself that there are gaps in your riding skills AND being motivated to want to do something about it that any lasting progress will be made.  Taking that first honest step is probably the most difficult of all - it certainly was for me.   Dr Spiegel's chart below shows the improvement process rather nicely (click to enlarge) 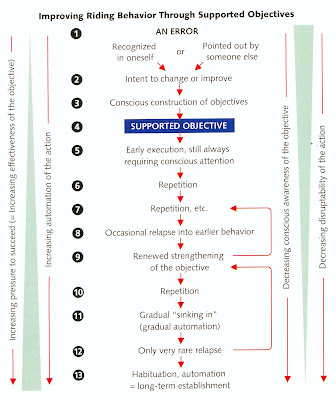 The author gives a telling example of repetition and training which will be recognised by many of us.  He says that he's always amazed at how well overall the British ride in the rain.  Whilst riders in drier countries prefer to avoid those conditions, the British have little choice because of the frequency of wet weather so they are not intimidated by the conditions.  Think about a long ride you've done in challenging conditions - you dial into it and gradually become more relaxed and proficient, don't you?

The book isn't all academic - Dr Spiegel gives eminently practical advice on how to apply the psychology of riding on an everyday basis.  Overall, this is probably one of the most important books about riding well that I've ever come across.  As already stated, it's not always an easy read and it's likely that if you haven't been riding all that long; the impact might not be as great as for a more experienced rider.  It's definitely a book which can be read repeatedly and still learn a lot.  Particularly good for those who are planning to become instructors themselves.  For me, it's helped to join together observations about my riding which I thought were loosely connected at best.  I've just ordered my own copy from Amazon!

Now that's got to be good for someone who is 64 today and trying to stay safe on 2 wheels for as long as possible eh?