2 years with the Street Triple

It's almost 2 years to the day since I bought the Street Triple and the comprehensive reviews earlier in this blog (HERE and HERE ) still stand good - it's a peach of a bike and I've loved every minute of owning it.  Today was its 20,000 km service so I knew that my wallet would get a lot lighter but hey; it was a sunny, warm day and the 320 km round trip to the dealer down mainly country lanes should take away some of the sting!

I love visiting Hamilton Motorcycle Centre as Heath, the dealer Principal and his team are more like friends than a business entity and it's that high quality personal service delivered with a smile and accompanying leg-pulling which puts them at the very top of the tree.

Whilst Matt, the Chief Technician started tearing the bike down for the major service, I wandered into the parts and showroom area to grab a coffee and look at the bikes as there's always something new and interesting. 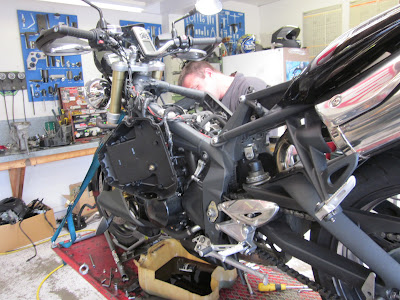 Some serious dismantling at 20,000 km 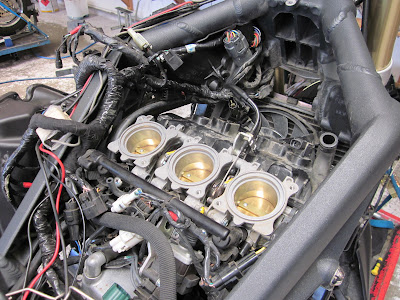 Let me share some of the nice stuff which the dealership currently has on the floor......

The first bike inside the door is a BSA trials bike, probably from the mid 60's.  Compared with modern bikes, they look so elegantly simple, almost flimsy.  I didn't bother to photograph the whole bike but was rather taken with the simple little muffler.  It was one of those designs which just felt and looked "right", if you know what I mean. 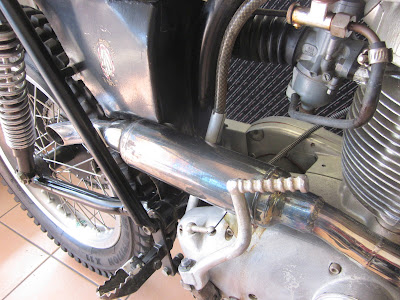 What a neat bit of engineering

The next bike to catch my eye was the touring version of the Triumph Rocket 3.  This was the first one I'd ever seen and it looked far more integrated than the roadster versions - I really liked it.  Woe betide  anyone who mistakes it for a conventional cruiser and tries to show it up on the road - there could be some red faces! 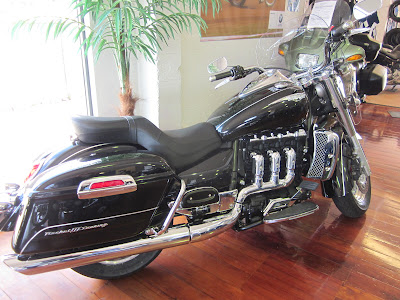 A wolf in sheep's clothing

Next bike to interest me was a new T100 Bonneville.  Bonnies have always had that iconic aura but the paint job on this one was very similar indeed to the early Bonnies when they were arguably the fastest thing on the road.  Triumph play the nostalgia card very well indeed. 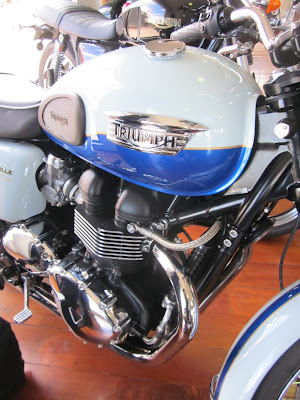 The Ducati brand really is sex on wheels and a row of them always makes a nice composition, as do the carbon Termignoni carbon end cans. These get the hormones sloshing about! 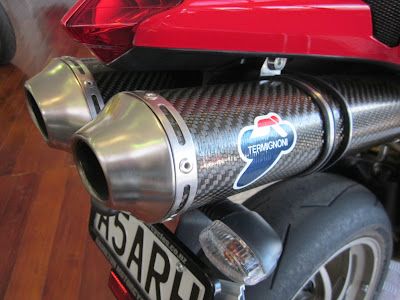 The next bike to catch my eye was the Triumph 800 adventure bike.  The attention to detail is superb with more than a little artistry about the design.  If I was being practical about replacing the Street Triple right now with something else, I think it would be one of these.  It gave me that hard-to-describe emotional connection inside which a lot of other bikes don't, despite them being excellent bikes in their own right. 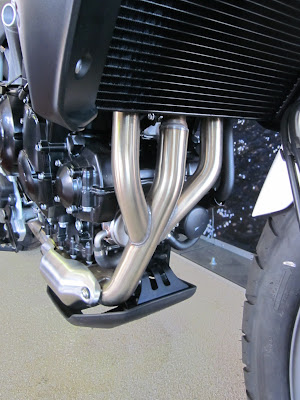 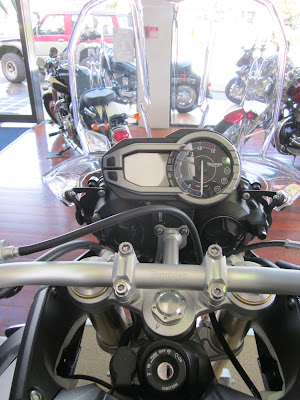 A customer's Kawasaki H1 500 triple was on display.  These bikes had a wicked reputation with the narrow powerband meaning that an incautious and heavy-handed rider was likely to need dental surgery when the front end came up and smacked him in the face.  Comparing it with modern bikes, the forks are ludicrously skinny and no doubt contributed to poor handling.  The narrow drum brake looks scarily inefficient! 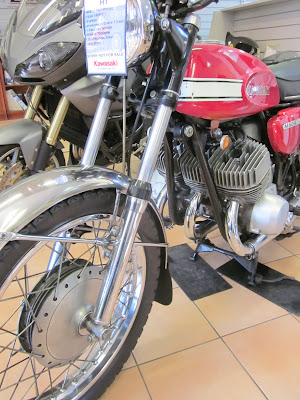 Mountain bikes have stiffer forks than these! 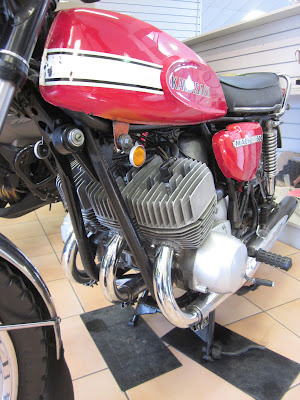 
The Triumph Tiger is a bike which has been around for some time and for some unexplainable reason, I really didn't pay a lot of attention to it.  That certainly changed seeing the one below.  In hot orange with a deeply-sculpted seat and some of the nicest panniers I've ever seen on a bike, it looked simply stunning.  Nicely done, Mr Triumph! 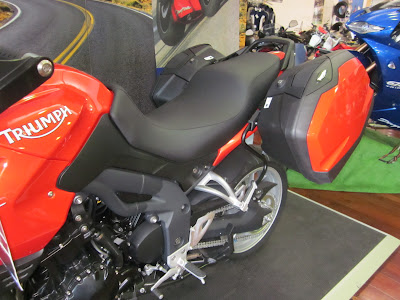 This is a seriously good-looking bike

That was the last of the photos I took in the shop but one of Heath's regular customers turned up on his Beemer R1200 and sidecar combination - something you don't see every day!  With the 2 big alloy side cases, an alloy top box and space inside the sidecar, it looked like you could tour with self-sufficiency for a fair length of time. 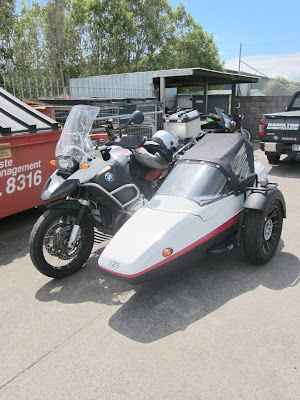 For the serious enthusiast!

Whilst I was waiting for the Triple to be finished, Heath wandered over and said, "Would you like to take the Ducati Streetfighter for a spin?"  This is the bike I showed in the 3rd and 4th photos of THIS recent post.  Would I what!!!!  However, experimentally cocking my leg over it, I was right on tip-toe and a nightmare vision of dropping an expensive piece of art at the traffic lights outside flashed before my eyes.  Sadly, I thought it was better to decline..... at least until I've mentally prepared myself for it!  Heath's generosity shows why he's so highly regarded in the industry.

Just before I left for home, I was having a chat with 2 biker gang members who proved to be really interesting as well as entertaining.  One of them uttered a sentence I thought I'd never hear, "Man, Harleys are sh*t, don't know why we had them".  They both had Rocket 3's; more effective for doing a runner on, that's for sure!

The ride home was glorious with warm temperatures and sparkling seas on the coast road.  In the town of Thames, a Triumph 675 Daytona and what was possibly a Triumph Bonneville America pulled out of a gas station  and followed me north up the twisty coast road.  I wasn't going to get sucked into a dick-waving contest so more or less stuck to the speed limit and maintained high cornering speeds to see what happened.  The Daytona rider stuck with me but made no attempt to pass and the guy on the cruiser got dropped off a bit.  The convoy re-grouped when I got baulked by a car in the twisties for a few moments which I then overtook down a straight bit.  The Daytona rider was content to sit on my tail at a sensible distance but the cruiser was hell-bent on getting past.  Unfortunately, it took him most of the straight to do it and he entered the next bend far too hot for his ground clearance and basic suspension, dancing all over the road with sparks coming off his stand or footpegs - quite a sight!   He must have been really close to filling his underpants as he slowed right up and waved me past.... what a hoot, but the consequences could have been much, much worse for him.  Would imagine that he felt a complete dick.

All in all, one of those days which makes the soul sing and most car drivers simply couldn't begin to understand.  Oh, and considering that I had a new air filter, oil and filter, new plugs, cam shim check, full diagnostics and a thorough check including a test ride; I thought that the charge of just over NZ$500 (US$400) was extremely reasonable!