I sent an email last evening to my friend in the UK, Dylan Rogers; who is an Institute of Advanced Motorists Observer (Instructor/Examiner).  Dylan has offered much encouragement and advice, for which I'm eternally grateful.  The first sentence contained an uncharacteristic profanity which was really an emotional outpouring of how I felt at that very moment.  It said, "F**k me, I am sooo tired....."!

Earlier this week, the date for my IAM Full Membership advanced riding test was confirmed - the final step after 8 months of one of the most demanding things I've ever undertaken.  The IAM Chief Examiner told me that my Examiner would be Simon, a serving motorcycle officer who qualified on both bikes and cars with the police in the UK.  The UK police riding standards are used as the basis for IAM training so it's unquestionably tough with no concessions if you're just a little off your game.  Anyone can have a bad day but having completed the Bay and Banjos Tour last weekend with my mates, I felt reasonably sharp, but not by any means over-confident.  The arrangement was to meet Simon in central Auckland at Deus Ex Machina, the extraordinary motorcycle cafe which I've previously mentioned (more on Deus shortly).

We live in a reasonably remote part of NZ and it's 180 km from central Auckland before I even start the test.  A real full-on day even before returning home!  Leaving home just before 0700 gave me time to ride to Auckland, have breakfast at Deus and a relaxing quick look at some of their new bikes before Simon arrived.  Over a coffee, Simon explained that we'd be doing dense traffic city work first, followed by urban work in the outer city, followed by both narrow, twisty back roads riding and open sweeping country roads where a whole range of different techniques are used.  If that wasn't enough, we would then finish off with a spell of motorway riding - Auckland motorways on a Friday afternoon...... shudder!  I'd not previously travelled on much of the planned route so that was a cause for additional stress.  I just had to put all my faith in the IAM techniques and a good riding plan to see me through.

As our village has a population of 1500 on a good day, I'm not that used to riding in the centre of a city populated by close to a million lunatics and it didn't start well.  The comms system which Simon kitted me out with was playing up and I was slowly becoming more paranoid in case I hadn't heard his directions properly.  We had to stop twice to fiddle with it before the problem was solved - very unsettling!!!  Oh yeah, then one side of my visor popped out of it's pivot - not a good sign! It only takes some minor incidents like this in a pressure situation to really stuff up your concentration!  The 1.5  hours of town and urban work felt fairly comfortable and my past training enabled the processing of more information than I'd previously thought possible.

Moving out onto the narrow, twisty back roads of Scenic Drive to the north west of Auckland was hard work.  Totally lined by trees and dense bush, most of the corners were blind and varied between 15 km/hr hairpins to 70 km/hr sweepers. To avoid the unnecessary use of brakes, good positioning, the right gear and reading the vanishing point was essential to avoid some real stuff-ups.   Adding to the pressure were variations in the posted speed limit all the way along the Drive. 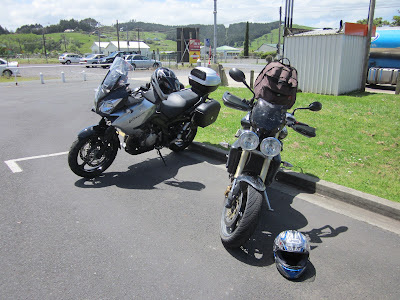 Over a quick lunch snack near the town of Kumeu, Simon said I'd done well and that the only things he'd noticed was that I could have set up position for 2 right hand corners a little earlier, but that they were still fine and that I could have made a little more progress at one stage (a euphemism for stepping the pace up, haha)!  With no black marks, it was hugely encouraging to relax and have fun on the afternoon session.

We continued north on SH16 which is largely continuous open sweepers with some blind crests.  Pretty much like last weekend's ride with the lads so that was fine and I felt perfectly at home, despite a very strong side-wind which was kicking the bike around.  There were a couple of poor overtaking manoeuvres by a motorcycle and a 4x4 on the outskirts of a village on this route which must have made Simon wish that he was on official duty!

The trip east to the town of Warkworth  was a mixture of tight bends, sweepers and a long stretch of fresh gravel which caused some consternation.  It wasn't the gravel itself, but the posted 30 km/hr speed limit.  There didn't appear to be a speed limit cancellation at the far end of the works and I was paranoid that I'd sped up whilst still in the restricted zone.  However, Simon was pretty certain that there wasn't a sign either - what a relief!  Only one other minor panic on this stretch - there was a one way bridge on a tight corner.  My approach was a little too fast (my arse was certainly twitching a bit!) so rather than hitting the brakes and demonstrating an error of judgement, I block-changed down 2 gears to get increased engine braking and got away with it - phew!  Shortly afterwards, Simon came on the radio and was complimentary about how I'd ridden that section which was wonderful to hear.

From Warkworth, it was back south down SH1 via Orewa and the Northern Motorway and demonstrating safe overtaking at speed in dense traffic - no worries at all and about 10 minutes riding time short of the Auckland Harbour Bridge, Simon called it quits and pulled me over.  I'd passed first time with a pretty much clean sheet which was way, way beyond my wildest dreams and tangled my words of thanks, I was so overcome!  The test lasted for a little over 4 hours and we covered close to 220 km which was a whole lot more than expected.  I'd been away from home for 11.5 hours and covered just under 600 km - no wonder I was stressed, hurting and dog tired! 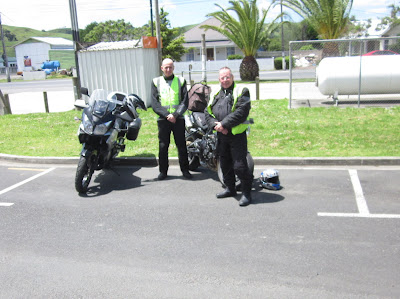 Simon and his victim

Earlier in this post, I said that this was the end of 8 months of hard work.  Except it isn't of course.  Those fantastically skilled  IAM Observer/Examiners like Simon, Wayne, Duncan and Philip who volunteer their time at no cost for something which they're passionate about and deliver real results in terms of riding safely deserve every accolade known.  The ideal means I can see of repaying them is to help as best I can, so my Observer training will start as soon as they're ready for me.  Can't feel any elation at present as it's been such a hard road - just feel relief and more than a little quiet pride.

I'd also like to sincerely thank fellow blogger Raftnn (Roger) and my mate Andy who are following the same IAM path.  Their unconditional support and leg-pulling has made the whole process so much more enjoyable for all of us through being able to share our experiences.  Although I've never met him, thanks also to Nigel Bowers who's Advanced Biker videos on YouTube have been so good in reinforcing my training on wet days and dark nights!

In the next day or two, I'll be posting a few reflections on the whole concept of advanced motorcycle training as there have been some benefits which aren't immediately obvious and if it encourages anyone else to have a go, that would be simply wonderful.

As a light finale to the post, I thought I'd share photos of some of the bikes which took my fancy at Deus Ex Machina this time round.

The first was an old-school Triumph drag bike - a wonderful sight for this ex-drag racer.  No supercharger though - note the big bottle of Nitrous Oxide on the side of the bike! 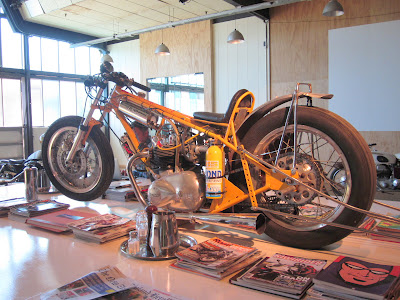 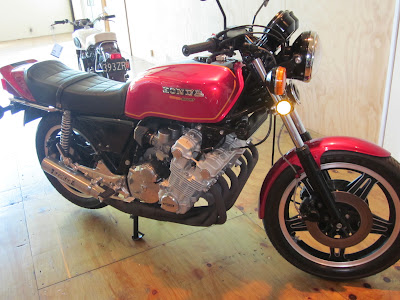 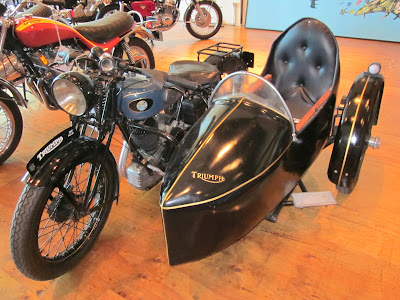 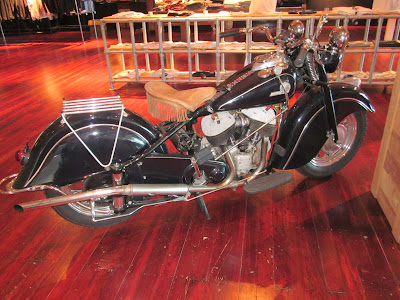 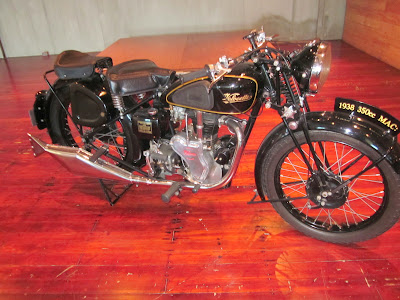 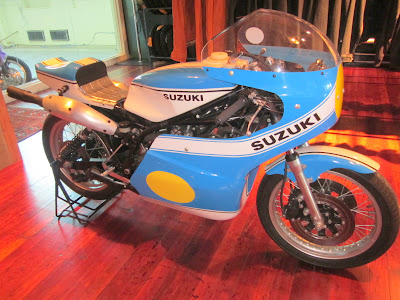 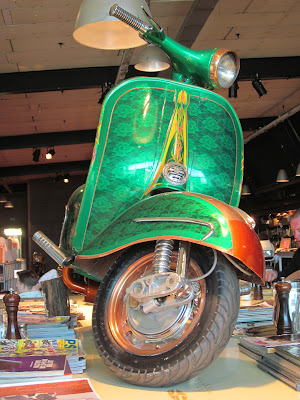 And I'm saving my personal favourite for last!  It's an early Innocenti (Lambretta) scooter which I initially thought was due to be restored.  However, looking at the string work on the carrier and the tyres which are in excellent condition, I'm more inclined to think that the important bits are in perfect working order and the bodywork etc has deliberately been left unrestored to create a sort of Mad Max or Steam Punk image.  If this is the intent, it's brilliant and I'd love to shake the owner's hand!  Hope that you like it too. 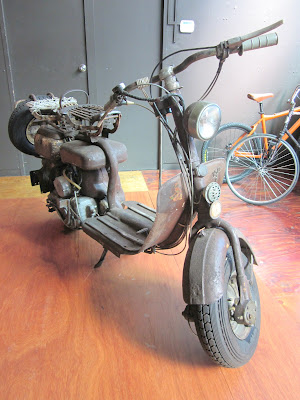 This is just so cool! 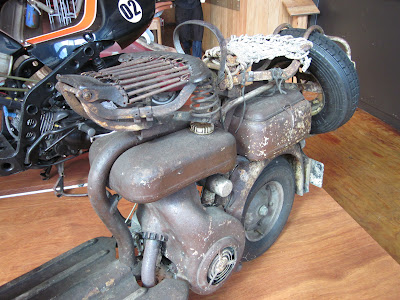