The Bay and Banjos Tour, day 3

After a pretty good nights' sleep, it's up fairly early to hose off all the mud accumulated from the dirt road section of the Forgotten World Highway.  There must be at least a kilo of the stuff in the radiator alone and removing that is a priority.  Before breakfast, time for a few photos of Whangamomona.  Most of it shut down years ago but many of the buildings have been either well-maintained or restored. 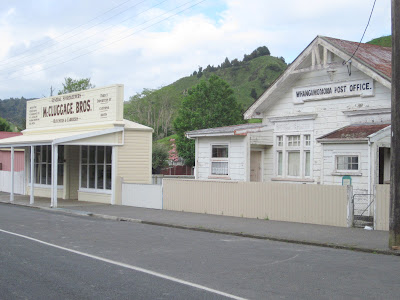 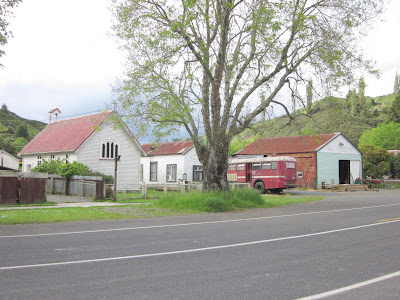 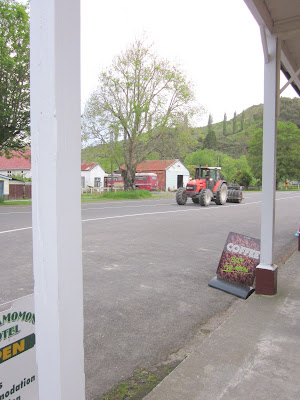 Now before we get underway on the western half of the Forgotten World Highway, I'll come back to my earlier comment about a warning sign I'd seen at the eastern end of the highway when I passed through by car last year, but seems to have been removed in the intervening period.  That sign said "Public Road - this is not a Race Track".  Now, a sign like that must be like a red rag to a bull for certain sections of the community and there's a photo in the hotel bar which I've copied below.  Some wag has sprayed over a few crucial words as you can see, with a Holden Monaro, Skyline GTR or similar going past at warp speed - absolutely priceless!  I'd imagine that defacing the sign was a regular occurrence so it got removed by the authorities on a permanent basis.  At least we now have a record of it! 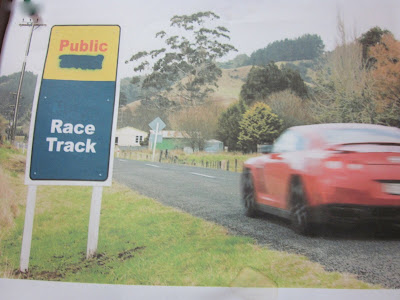 After a light breakfast, I lead off heading for the western end of the Forgotten World Highway near Stratford.  The road is as twisty and up and down as ever, but is in much better condition and mostly runs through farm country.  It's a good job we're riding defensively as two cows are grazing contentedly on the edge of a road round a blind bend.  That sort of hazard is pretty regular in rural NZ.  We climb up over two saddles which are mini versions of those European pass roads which are constantly doubling back on themselves.  This is where the light weight, high footpegs and big torque spread on the Street Triple really gives an advantage and the extra capacity of the following bikes offers no advantage at all - what an awesome run! 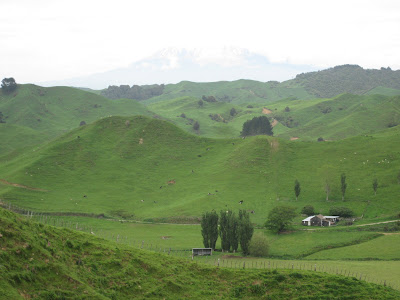 Strathmore Saddle with the Mt Taranaki volcano in the background 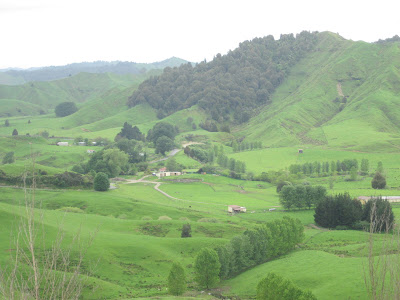 View from the Strathmore Saddle in the other direction
- lonely country

A quick refuel at Stratford, over the twisty and technical Mt Messenger section of road and then it's a quick trip up the coast to the village of Mokau for brunch.  No photos of  Mt Messenger or the stunningly beautiful coast as we are on a mission!  It's whitebait season in NZ and everyone bar John is hanging out for this delicacy.  The NZ whitebait is the juvenile form of a NZ native fish, just a few centimetres long and translucent.  They're caught in things that look like big butterfly nets at river mouths.  The traditional way of eating them is to mix them with a little beaten egg, pan fry them as an omelette and serve them with bread and butter and a lemon wedge.  Absolutely divine.  My wife can't stand them though - she thinks all those eyes staring up reproachfully at her is gross! 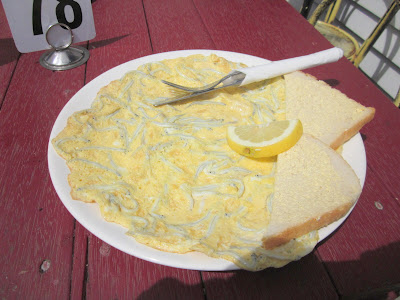 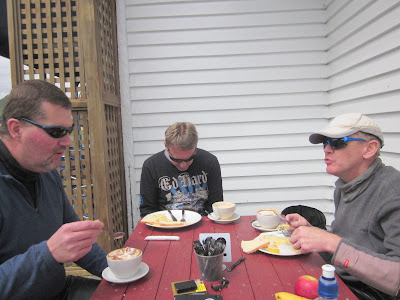 Andy notices a sign in the village butcher's shop that says fresh whitebait are for sale so pops over to buy some to take home.  Its delicacy value is reflected in the $140/kg price - eek!  Mind you, the 400g which Andy bought will make a good few fritters.

The next leg homewards is through the Awakino Gorge and on to our next fuel stop at the village of Piopio.  The Awakino Gorge is another bike road made in heaven with fast sweepers, tight bends and a smooth, grippy surface.  Dave volunteers to lead on his Blackbird, saying "I'm not going to lead as fast as you guys, I'm out of practice".  Fine with us as the leader always sets the pace but as it happens, Dave just gets in the groove and provides us with a memorable tow which is incredibly smooth - everyone was fizzing at the next stop!

John takes over for the run up to the small town of Otorohanga where the Auckland contingent will take to the back roads north to get home and I'll cut across country to Coromandel.  Exiting Te Kuiti, another bike joins onto the back of us and we all stare in our mirrors, trying to figure out what it is.  As we park up in Otorohanga to say our goodbyes, the other bike parks up with us and WOW!!!!  The owner, another nice guy who lives in New Plymouth back down the coast tells us that he's recently taken delivery of the first Aprilia Tuono V4 in NZ and he's on the way to Auckland for the first service. The powerplant originates from the Aprilia Superbike and is an absolutely wicked beast, with a lot of extras on it.  Sounds amazing too with its little stubby exhaust can.  Guess that if you can afford a bike like that, you can also afford the insurance and operating costs! 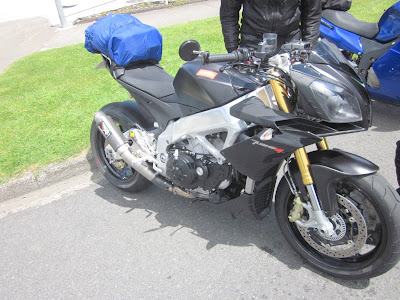 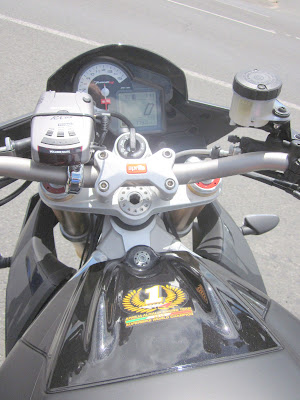 Cockpit view of the Aprilia V4


I bid a heartfelt goodbye to Andy, John and Dave.  It's always hard to split from such good friends - you just want to keep riding forever as it's been such a wonderful 3 days...  great company, great food, great riding with a permanent smile on the face.  The lads head for Auckland with the Aprilia tagging along and I cut across country for the remaining 220 km home to Coromandel.

As well as reflecting on the last 3 days which has been such a great adventure,  I'm also conscious that all the riding over challenging roads for that length of time has moved my skills up a notch.  All the normal riding functions are being taken care of at a virtually subconscious level, leaving what seems to be heaps of real time dedicated to situational awareness and riding plans.  I'm beginning to understand more of the book I reviewed in THIS recent post - must re-read it!

Thanks guys for a spectacular 3 days away - simply can't wait for the next one!!