It's mid-afternoon on New Years' Day in NZ and everyone is chilling out in our household.  I was inspired by fellow blogger Trobairitz' gorgeous photos from 2011, so spent the last hour rifling through one of our old photo boxes for stuff from years gone by.  No particular reasons for choosing the ones I did except that in most cases, there was a bit of a story to go with them.  Hope that you aren't bored witless!

Let's get the most embarrassing (groan, blush) one out of the way first.  It was taken when I was 16, the year before getting my first motorcycle.  I'd been into building model aircraft for years and this photo was taken at the national championships.  We always used to wear some wacky clothing when competing but whatever possessed me to wear a leopard print shirt defies rational explanation - I hope you've kept your lunch down.  The birds nest hair just adds to the appalling fashion statement.  No wonder that girls steered well clear.....

It's highly arguable whether my fashion sense got a lot better but you have to take the next photo in the context of the era - 1972.  It was taken on our wedding day at a very old church in Kent, UK.  Jennie looks a million dollars and her wedding dress wouldn't be out of place today.  I wore a brown suit with matching waistcoat, flared trousers and wide, wide tie - totally in keeping with the Swinging 70's.  I don't know what my Mother in Law had to complain about - I'd had a very substantial haircut for the occasion which should have been enough.  However, I had the temerity to wear a cream shirt instead of a white one - something which she never forgave me for and still grumbled about over the decades which followed, sigh...... 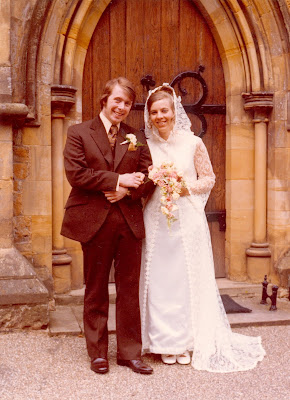 This picture was taken at Mallory Park in the UK in 1968.  At first glance, it's just a race bike from that area.  However, there were a number of innovative privateer bikes around that time which gave the factory-supported race bikes a real run for their money and this one was no exception.  It was ridden by a chap called Peter Humber who stuck a 3 cylinder 2 stroke Crescent outboard boat engine in a  special frame.  Not only was it extremely fast but it sounded incredible.  I don't know what happened to the development of it, but bikes like this enriched the racing scene in the late 60's. 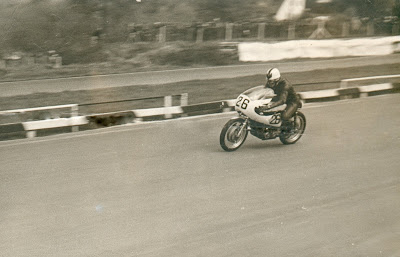 Drag racing in the UK back in the 60's produced some interesting machinery and the car below was based on a Reliant Scimitar GTE with an unblown 427 powerplant - it was called Whistler.  The Reliant Scimitar was manufactured by a company better known for a range of ghastly underpowered 3-wheelers and it was a real surprise when the Scimitar was released.  Glass fibre body powered by a straight 6 Ford engine - looked great and performed well too.  There's still a cult following in NZ with a Scimitar owner's club of around 150 cars.  Amazing for a country with only 4M population. 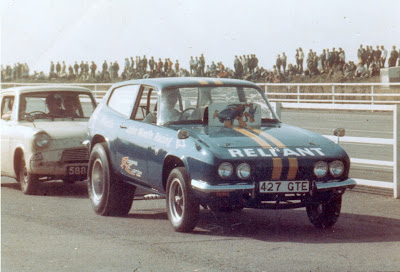 1970 was the year in which my drag bike really started to perform, particularly over the longer distances.  The photo below was taken at a standing start mile event which I was taking part in at Greenham Common.  This was a USAF base in southern England with a 2 mile runway.  The photo is of the doyen of motoring journalists at the time, Dennis Jenkinson.  DSJ as he was known to most, had a phenomenal knowledge of anything to do with motorsport and was equally at home writing deep technical articles or lighter material.  The consummate professional.

One further comment before we leave this photo.  Greenham Common was a base where nuclear weapons were stored.  It was in the days before terrorism and security was rudimentary to say the least.  Our event was on their main runway and all I can remember about getting onto the base was rocking up at the guardhouse with my bike on a trailer behind the car and an entry acceptance form - incredible! 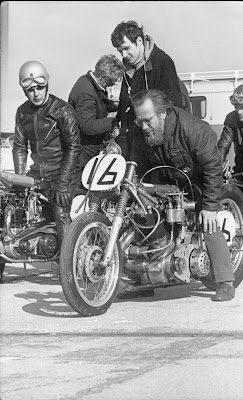 DSJ checking out a competitor's bike

The bike below is the one which got me back into bikes in the 1980's.  It's the Japanese domestic market version of the internationally-sold Honda XBR 500 single.  This particular version is the GB400 TT which was modelled on the classic British singles of the time  - the Gold Star, Manx Norton and so on.  The fairing is an aftermarket one based on a Yamaha RZ 350.  The fairing looks like it was made for the bike and I loved it to bits.  Photo taken in 1989. 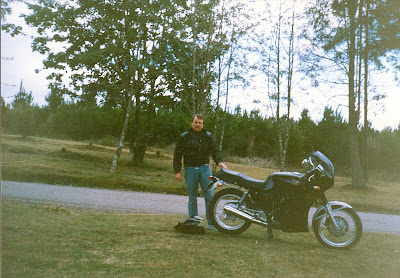 Back in 1989, I was well into bikes again but still competing at a national level sailing catamarans.  The photo below was taken on a lay-day at the national championships in Nelson, south island.  I like it simply because it's a natural photo of our daughter Victoria and me chilling out together.  Regular readers of this blog may remember that she became a professionally-registered psychologist last month.  Where on earth did the time go??? 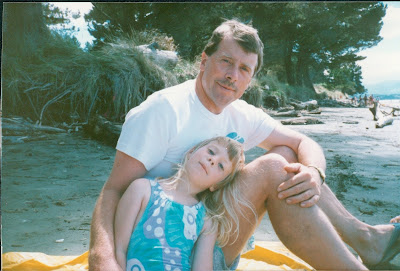 Victoria and her soft-touch father

For part of 1996,  I was attached to our parent company in the southern US.  One weekend, I visited Barksdale AFB in Louisiana, home of the 8th Air Force's B52's.  As per my experience at Greenham Common, security in those days was non-existent by today's standards.  The only worrying thing as I recall was a guard barely out of his teens carrying a monstrous sidearm!  They had an open air museum of memorabilia which was amazing and the photo below sets the scene.  The fuselage below is from the Hustler supersonic bomber, IMHO, one of the loveliest aircraft ever built.  This one was particularly interesting as it had been converted into a rocket sled which had been fired down the test track at Holloman AFB at some ungodly speed.  Eagle-eyed observers in the background will note the business end of a Minuteman nuclear missile! 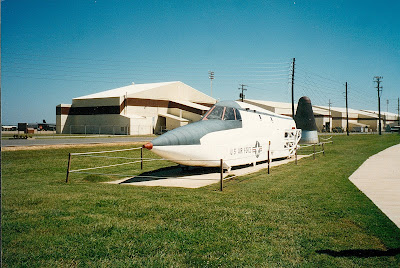 The photo below was also taken at Barksdale.  It's a Mitchell WW2 bomber which had been impeccably restored.  It struck me how small it is compared with modern warplanes and how vulnerable the aircrew were.  Deep respect. 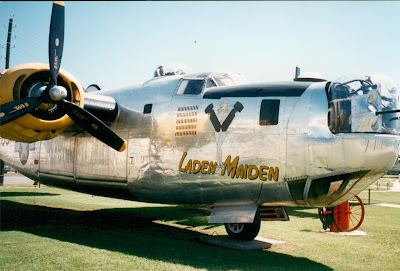 The next photo is of my 1985 BMW K100RS which I bought in 1993.  I was looking for something to replace the GB 400 and hadn't even contemplated a BMW.  However, I wandered into an Auckland bike shop and there was the Beemer.  It was being sold on behalf of a customer who had been working overseas for several years. It hadn't been used for 3 or 4 years and had only covered around 20,000 km.  It was in near-flawless condition and to get it off their hands, I was offered it for a ridiculously low price, complete with new tyres and official BMW panniers.  A true long distance sports tourer with elegant looks.

I loved that bike and with a couple of fairly minor exceptions, it served me reliably until I bought the Blackbird in 2001.  The photo was taken in 1999 (I think) when my Godmother and two daughters visited from the UK.  In fact, we recently received an email from Linda in the photo remembering one of the highlights of the visit when I took both of them on the back and did "The Ton", an old British phrase for cracking the 100 mph barrier.  Happy days! 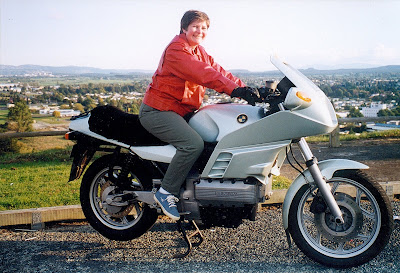 Moving right up to the present day, I took the photo below on Christmas Day.  Regular readers may remember the post 6 months ago when a starving kitten 5 or 6 weeks old appeared in our garden and never went away.  Little Orphan Annie has since grown into the most gorgeous, affectionate kitten who rules the household.  Like the rest of our family, she over-ate on Xmas day and flaked out on our bed.  Her tongue just poking out adds to the cuteness factor! 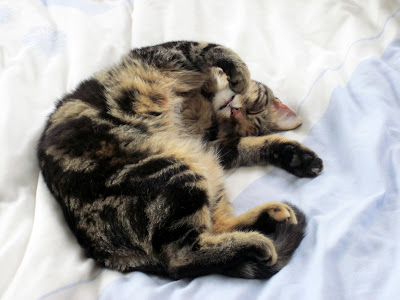 A happy and prosperous New Year to everyone!