Do you believe in Serendipity?

This post has nothing to do with bikes but it's such a cool little story that it's worth sharing!

Our eldest son Lyndon studied for his first degree in the 1990's at Otago University, Dunedin, in NZ's south island. Dunedin has a strong Scottish influence from the first settlers. Although Lyndon subsequently went on to further study in Auckland after graduation, Otago had a special place in his heart. Knox College, where he resided for his first 2 years has traditions similar to Oxford and Cambridge - dressing for dinner, college balls in full evening dress and so on. There was even a cast iron antique bath in the quadrangle filled with old green rainwater and unmentionable substances which students got hurled into for various misdemeanours and birthdays, but that's another story which ended up with us being called "The Parents From Hell", hehe

Surprisingly for a lad from the provinces, he lapped up the atmosphere and ceremony. After the first 2 years in college accommodation, Lyndon went flatting.  Students at Otago are known as Scarfies (after the blue and gold scarves they wear). Scarfie accommodation outside the colleges are often dire, unsanitary old weatherboard-clad rental houses which everyone but students wisely steer well clear of. Nonetheless, they add a certain charm to the city. 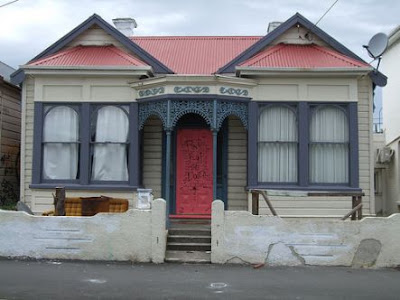 A tidy(ish) example of student flats

Social life revolved around sport, the opposite sex and beer, not necessarily in that order. The local Speights brewery ensures that the Scarfies get to enjoy themselves for very modest prices thanks to generous sponsorship of events involving the consumption of vast amounts of alcoholic beverages. One of the favourite hang-outs was the (in)famous Gardies student pub - not the sort of place you go for a quiet sip of chardonnay and an exquisite meal. In fact, it wouldn't surprise me if the evening clean-up by bar staff involved high pressure hoses and industrial-strength disinfectant. The 3-dimensional sign outside was a giant can of Speights Gold Medal Ale on a pole. 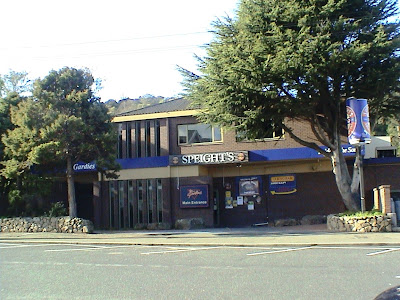 The Scottish influence extended to architecture and the university Registry Building is a delight in heavy, dark stone. They even have a statue of Scotland's great poet Robbie Burns in the centre of town. 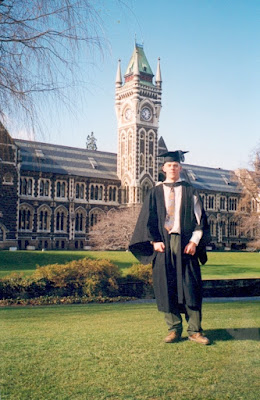 Lyndon outside the Registry Building

Fast forward to 2006 when Lyndon was building a good career and with his birthday approaching, we asked him whether there was anything he'd particularly like as a present. He said that he'd like a nice framed print of Dunedin as a reminder of those great days which showed some of the landmarks (like his college and the pub!) he was intimately associated with. He wasn't interested in a photo collage, but would like something like a cartoon-style art sketch in vibrant colours. He even went as far as giving us a (very rough) sketch to show what he meant. Try as we may, we simply couldn't find anything suitable and we ended up giving him something else. We never entirely forgot about it, but had more or less given up hope of ever finding anything in the style he was looking for.

Jumping forward to around Easter this year.... I was cleaning out a whole load of old emails and I found one from Lyndon back in 2006 which had a copy of his sketch attached. This pricked my conscience and I Googled "sketches of Dunedin". Still no joy as expected but it did throw up a blog of excellent sketches done around NZ's capital, Wellington. As I flicked through them, there was an acrylic on canvas sketch of Oriental Parade on Wellington's waterfront. I was transfixed - it was in exactly the style which Lyndon was looking for!!!

There was virtually no information on the blog about the person who had sketched it, save for an email address. Showed Jennie, she thought that it was worth following up so I sent an exploratory email off with a bit of background, wondering whether a commission might be possible. A few days later, a reply arrived from Fiona Ryan.  Not only was she interested, she was currently holidaying within half an hour of where we lived and she'd be happy to meet up for a coffee and a chat - how good is that for a serendipitous sign?? We organised a meeting at a cafe near where she was staying and I rode over on the bike as Jennie was on a girl's "shop 'till you drop" expedition out of town.  Fiona is a graphic designer from Wellington who was on her honeymoon in our area.  Felt a bit guilty dragging her away from her new husband and family, but she suggested it!  We hit it off straight away and Fiona said that she just sketched for fun and this would be her first commission - fantastic!!  She suggested that she produce a quick composition to see if it was what we had in mind and we could take it from there. A couple of weeks later, a working sketch arrived by email, partially coloured in to indicate the finished effect.  It was better than we could have ever hoped for - a perfect match for our mental image!  She'd nailed it first time up from the photos we'd given her.  We particularly loved the little touches like the chairs in the student accommodation yards, the little birds and animals and even an Otago rugby team shirt on a washing line - pure class!


Moving forward, Fiona completed the acrylic on canvas painting and couriered it up to us.  What a beauty - we were over the moon and the little touches like "borrowed" road marker cones in the student garden and outside the pub are outstanding and so typical of students everywhere.  Old chairs and settees in the garden are also a feature of Dunedin student flats! Here's the finished painting - compare it with the "essence" of the photos near the top of the blog to see how well Fiona captured the spirit of the place: 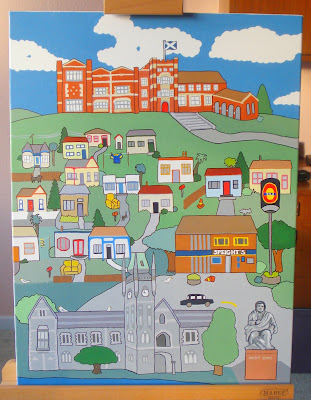 I'm sub-zero when it comes to artistic talent but love good art of any kind.  It might be a personal thing but this style of painting seems particularly effective in evoking memories of a place which you've known intimately, as opposed to a painting, print or photo in a more formal style. Somehow, it captures the essence of a particular time and place in your life as it triggers the memories buried inside your head.

Yesterday, we visited Lyndon as it's his birthday this week and his jaw just dropped.  Isn't it lovely to see such a reaction of pleasure when someone is caught out totally unaware?  As we thought, he imagined that we hadn't been successful but had never considered that he'd ever receive an original piece of art. As a parting item, here's the artist, Fiona Ryan seen finishing off the picture. 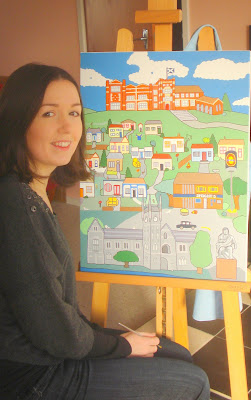 If anyone wants to see the lovely evocative sketches done for her own pleasure, predominantly of the Wellington NZ area, click  HERE.  Her email address is on the website if anyone is keen to talk to her about a commission, particularly Kiwi Wellingtonians!

Serendipity?  Probably as close as makes no difference!