The Street Triple came equipped with Dunlop Qualifier sport tyres.  In overall terms, grip was probably more than my riding habits would require excepting unforeseen events.  However, by 6000 km, the rear hadn’t got much tread left and both tyres had lost their original profile to a significant degree.  It was noticeable that under hard cornering, the bike tended to drop in rather than progressively roll in. My earlier musings on tyres is HERE.

Because some decent distances were planned to be covered in the following 6 months, I replaced them with a set of Avon Storm 2 Ultra sport touring tyres.  As mentioned in a couple of previous posts, I’ve been an Avon fan for years.  The dry weather grip is probably on par with many other good quality makes of tyre but what has been outstanding for me is wet weather performance.  Even with standing water on the tar seal, they hang on exceptionally well and don't suddenly let go.  The other feature I’ve really liked is that they retain their profile through a large percentage of their total lifespan, meaning that you don’t have to replace them early because handling has been adversely affected.

I've just covered a shade over 10000 km on these tyres and the rear is down to the minimum depth wear bar in the centre of the tread.  Note in the picture though how even the profile across the tyre is - no big flat in the centre to upset the handling.  The tyre is dual compound with a harder centre and softer sides.  Although it wasn't really noticeable when new, the harder compound in the centre can clearly be seen now although the transition can barely be felt with a fingernail.  Sooo... verdict on the rear tyre - extremely satisfied with the performance.  Good grip in the dry, outstanding grip in the wet, turn-in is very progressive and profile remains pretty constant over its total life.  Not a bad tyre life overall considering the conditions of its use on predominantly twisty roads with coarse chip. 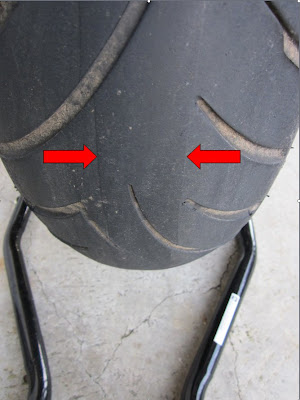 The front tyre probably has at least a further 2000-3000km of life in terms of centre tread depth but it's developed significant flats on the side of the tyre.  The flats are clearly visible in the photo below. Whilst the handling doesn't feel compromised at present, it certainly will before long.  The root causes of the side wear are hard to determine.  I'm paranoid about accurate tyre pressures and am inclined to think that the wear is probably normal given that the roads I mainly ride on are twisty with coarse chip.  Fairly stiff suspension, budget suspension damping and vigorous countersteering won't help either.  Verdict: Excellent tyre in terms of wet and dry weather grip but uneven profile wear well before reaching minimum tread depth. 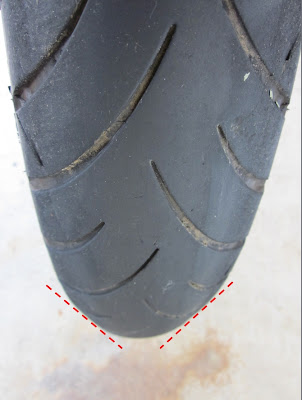 Where to from here?
I don't want to go back to pure sport tyres and replace them at least twice a year, so sport-touring tyres will fill the bill for longer life, but still provide grip for enthusiastic cornering.  I've done a lot of reading and Pirelli Angel ST's, Dunlop Roadsmarts and Michelin Pilot Road 3's all seem to fit the bill, although I've read a few reports detailing the odd issue with all of them.  Realistically, will they offer any more in terms of performance and "feel" than the Avon Storms?  Is there a case for taking a chance on something else at present?  Is there a significant price differential between brands - enough to influence the final choice?

My thinking was to simply replace the rear tyre with an identical one.  For the front, I was tempted to go for the sportier Avon VP2 Sport for even more grip (they're compatible).  I don't mind the odd rear wheel slide but the couple of front end slides I've had in years gone by are a bit unnerving.   I got 7000 km from the front VP2 on my Blackbird and the lighter weight and more aggressive steering geometry of the Triple should give significantly more life, still allowing both tyres to be changed at the same time. It's pointless skimping on tyres when their role in keeping you upright is so important.

After a little more research on the 'net, the new Michelin PR3's looked an interesting proposition but maybe not enough to sway me.  However, after a call to our nearest decent tyre depot, I was surprised to find that there is indeed a significant price differential.  The full Avon set is NZ$650, balanced and fitted whereas the pair of Michelins is a nice round NZ$600.  The price advantage and performance research has been sufficient to convince me to buy a set and it will be interesting to compare their performance with the Avons.  Doubt that I'll be buying a lemon as some of the early reports are pretty encouraging.

Rode to the Drury Performance Centre in South Auckland to get the new tyres fitted.  I hadn't been there before and was extremely impressed with their professionalism so have no difficulty in giving them a well-deserved plug! 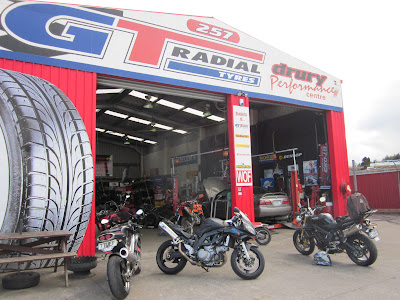 After greeting me and double-checking the tyres I'd ordered, I was given a voucher for a coffee at a cafe across the road.  Actually, it wasn't really a cafe as such,  it was Roma Coffee Roasters and I was able to sit and have a superb cup of Macciato whilst watching beans being roasted on a commercial scale behind the counter!

Meanwhile, the guys had started to replace the tyres and I strolled round having a look at some of the tyres in stock.  The 300-section tyre shown below was pretty impressive - presumably for an outrageous chopper or something like a Rocket 3.  You'd need a healthy bank balance to replace that! 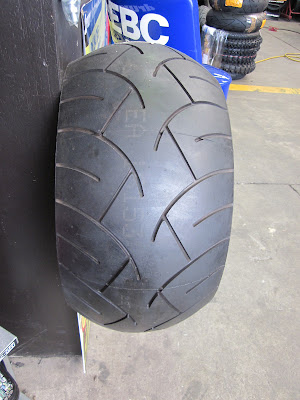 There was a gorgeous early (1980's) GSX-R 1100 parked inside which caught my eye.  It had aftermarket Ohlins suspension and Yoshimura cans but the rest of it looked pretty stock standard.  It was in beautiful condition, not show pony good, but good as in someone who loves his bike, rides it regularly and hard and loves it to bits.  I  mentally raised my hat to the owner. 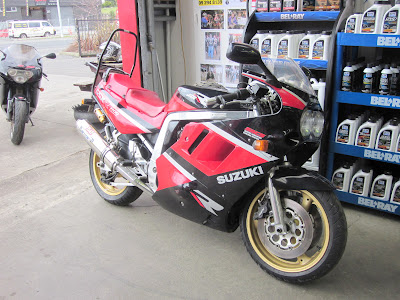 The Michelin Pilot road 3's are a pretty new tyre and replace the hugely popular PR 2's.  The 3's have very fine grooves (sipes) as part of the tread pattern to apparently hugely increase wet weather performance.  These are rare on motorcycles but as an aside, I found out sipes were first invented in the 1920's to increase the grip of rubber shoes in wet slaughterhouses - nothing new under the sun eh? 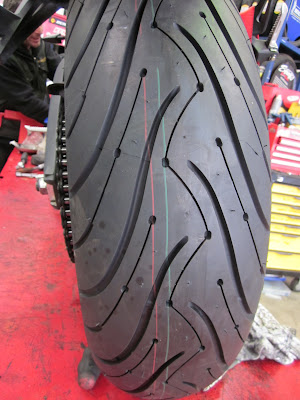 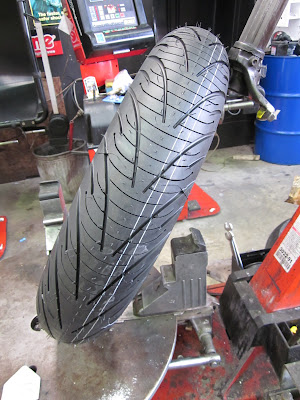 Here's where things took a bizarre turn!  I was sitting in the customer reception area waiting for the fitting to be completed and was flicking through the NZ Magazine Motorcycle Trader (Aug 2011 edition). It had an interesting article on tyres and I noticed that there was a photo of a Street Triple.  See propped-up magazine in the photo below - bottom photo in magazine. (Click to enlarge). 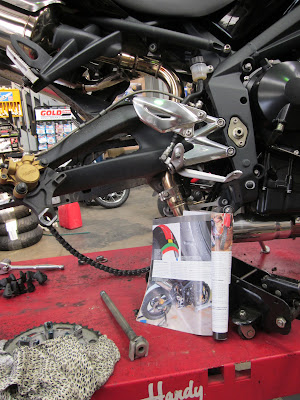 It suddenly dawned on me that it was was MY Street Triple and the photo was taken from my blog post from 21st February this year!  It shows the laser wheel alignment rig I'd originally built for the Blackbird. I'm not annoyed - surprised more like at seeing it but I don't think an email to Motorcycle Trader will go amiss to find out a bit more.

Taking the normal care with new tyres, I headed home down some twisty back roads to scrub them in.  Normally with new tyres,  they feel quite flighty in comparison with the old ones but I'd have to say that these didn't feel significantly different to the Avons which they replaced.  I think that this is testimony to how well the Avons held their profile over the complete life of the tyre.  Once on the coast road up to Coromandel,  I felt confident enough to press on a bit and when I got home, the rear was scrubbed in right to the edges.  Initial impressions are very favourable and really looking forward to evaluating them over a longer period and in a whole range of conditions.  I'll certainly be going back to Drury Performance Centre, really nice guys with a great service ethic.

ADDENDUM:  I followed up the matter of my photo appearing and whilst they didn't directly admit to stealing my photo from the blog, they did offer a carabiner-type helmet lock and fancy wire strop as a "goodwill gesture", plus a free subscription to their magazine.  I was quite happy with the outcome - they got the message and I got some goodies!

Note: A full end of life review of the Michelin PR3 tyres mentioned above can be found HERE
Posted by Geoff James at 17:14