After the unplanned expenditure mentioned in part 2, I decided to get something for myself; albeit rather more modest.  We'd heard about a men's and women's tailoring enterprise at Patong Beach called Tom's International Collection.  Being retired and having hung up my business gear, tee shirts and jeans or shorts tend to be my everyday clothing.  From time to time, Jennie and our daughter Victoria "encourage" me (an understatement) to look a bit tidier so the plan was to get some nice casual "dress" shirts made.  I don't want to drag this out, but what a great experience!  The standard of service, choice of materials, patterns and professionalism couldn't be faulted and we'd be hard-pressed to find an equivalent service in the West unless it was at the very top end of the market.  Loved the little touches like a different pattern lining in the collars and cuffs.  From first measurement to final collection of 3 superb shirts in less than 2 days was great, at a price that was substantially less than off-the-peg poorer fitting and lower quality garments in NZ.  Also, now that they have my measurements, I can mail order more at any time.  Just to conclude the tale, Jennie had a pure silk evening top made and it's a stunner so we were both happy.  So there you are... if you ever find yourself at Patong Beach, go to Tom's and ask for Ali - you won't be disappointed.

Saw this nice Honda cruiser near the tailors with the Grim Reaper airbrushed into the tank and rear guard - paint looked an inch thick! 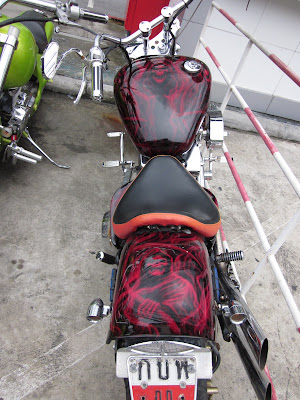 That evening, we decided on a bit of entertainment and trotted along to a show just north of Patong Beach called "Fantasea".  We knew that you got a feed and the show involved elephants but that was about it.  The location was superb and the organisation faultless.  The huge grounds were set up like an old-fashioned carnival and shops but with modern decor so that you could amuse yourself after eating and before and after the show.  The evening meal area was a buffet of beautiful foods and could cater for 4000 people at a time!  Organisation was excellent and it didn't feel at all cramped or rushed in the dining area. 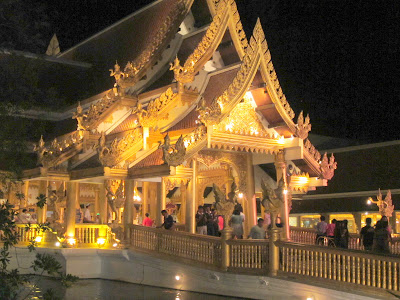 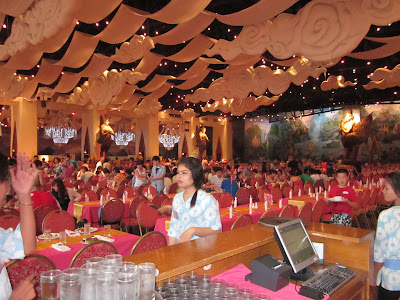 A small section of the dining area

After the meal, we took part in some of the carnival/funfair attractions, one of them being on the pistol range.  I hadn't fired a handgun for over 30 years and was simply amazed (so were the attendants!) to score all inners and bulls, winning a lovely stuffed elephant toy which will be going to our granddaughter.

The stage show itself was spectacular.  The storyline was an old Thai story about a prince combating evil, but using modern sets, laser light, fireworks, elephants and other performing animals - incredibly well done.  We weren't allowed to take photos from the show but here's a selection of shots outside taken in the grounds. 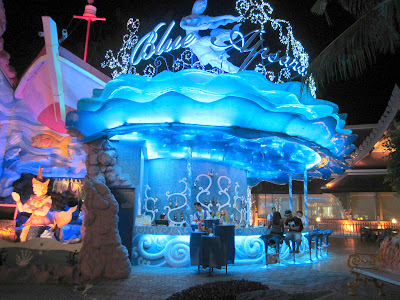 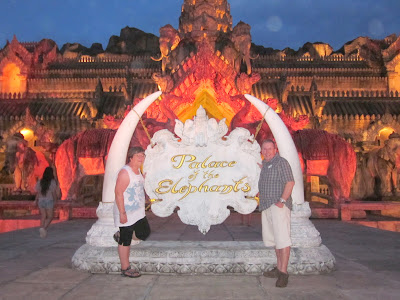 Entrance to the show 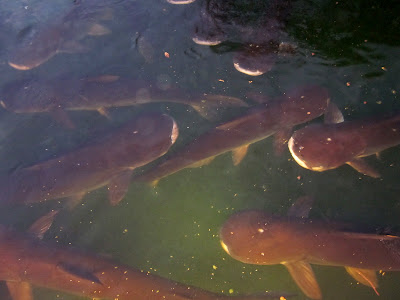 The following day was time for a bit of action - kayaking off the north east coast of Phuket Island.  A boat took us to an area which was a little reminiscent of our March visit to Halong Bay in Vietnam, and let us loose on inflatable kayaks at several particularly beautiful islands.  One of them was "James Bond Island" where part of The Man With the Golden Gun was filmed many moons ago.  Another island was riddled with caves and a central lagoon.  To get to the lagoon, some of the caves were so narrow that you had to lie down in the kayak and push on the walls with the paddle! 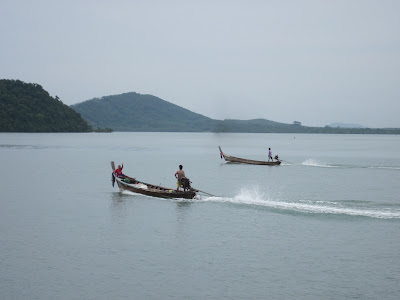 Crab fishermen in the bay 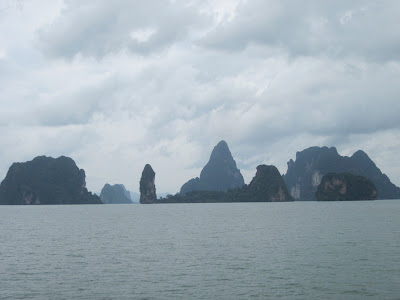 Some of the limestone islands 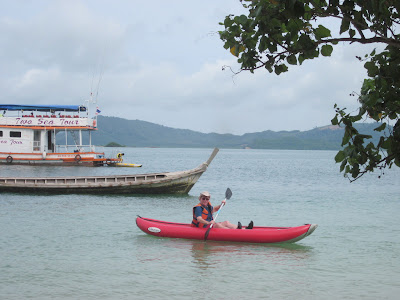 Yours truly off for a paddle 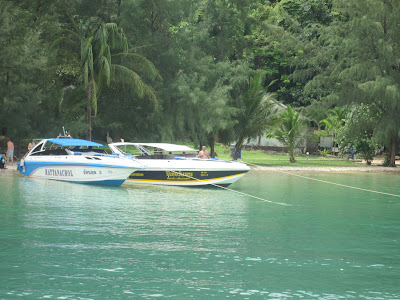 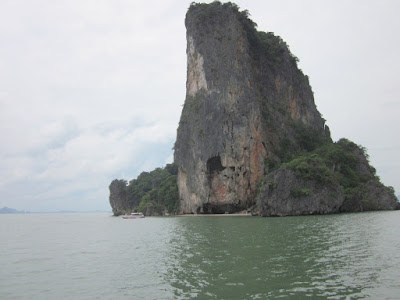 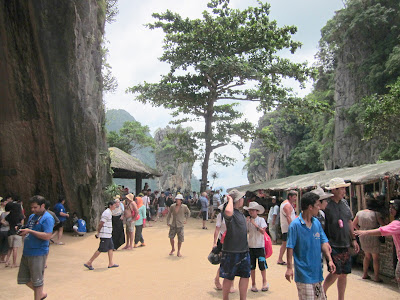 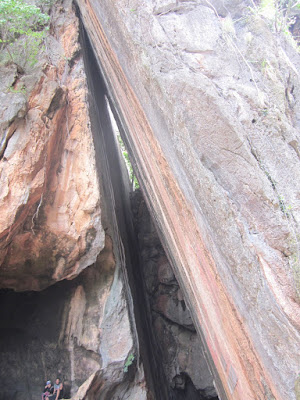 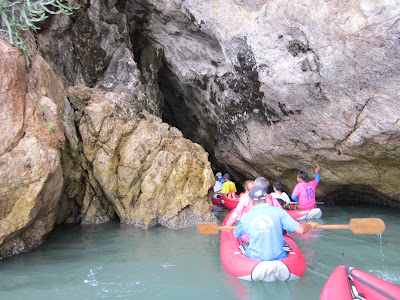 Entering the cave system on an island 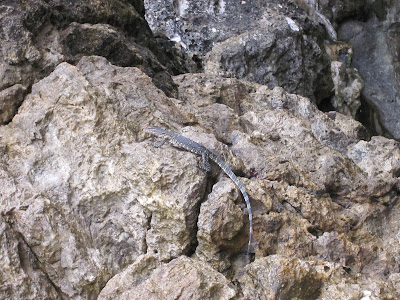 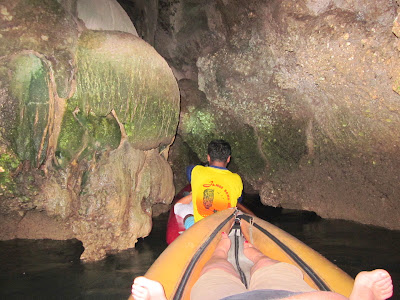 Jennie and I laying flat to get through a narrow squeeze 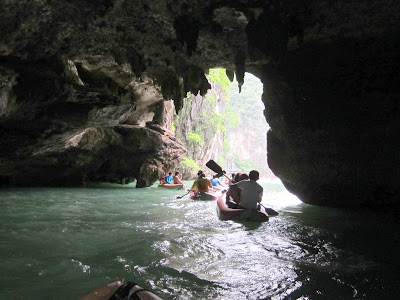 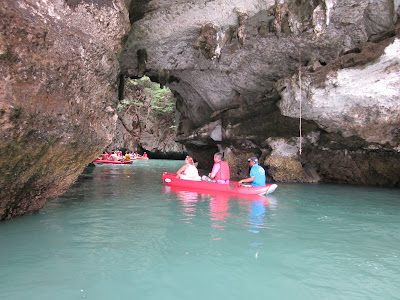 Part of the inner lagoon 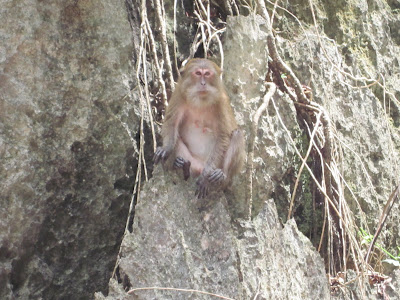 Old-looking monkey on the lagoon walls

On the way home, we noticed the following sign near a beach.  Wondered if it meant that you were only safe from tsunamis at an altitude of 300 metres vertically above the sign!!! 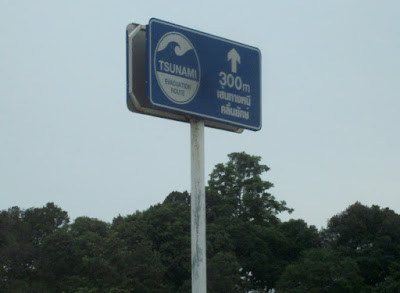