Our first sightseeing trip out was a drive round the southern part of Phuket island, basically to see something of the countryside and to get a feel for the place away from the westernised Patong Beach.  On the road south down the west coast, we were tickled to see an elephant road warning sign, followed shortly after by elephants which looked like they were clearing logs from a rubber tree plantation - really cool! 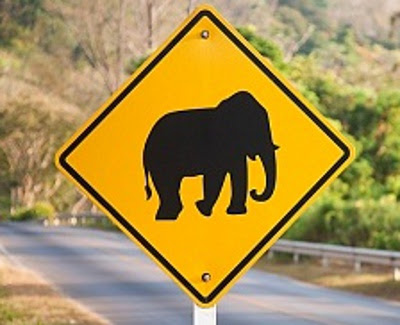 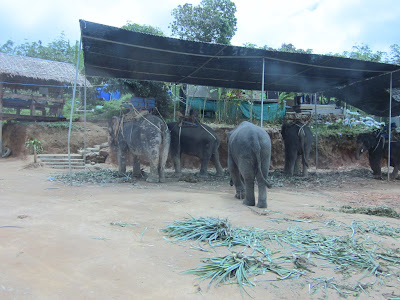 Garaging for the Thai equivalent of D7 bulldozers!

There were many spectacular views from hills all round the southern part of the island and the height seemed to accentuate the cloud formations. 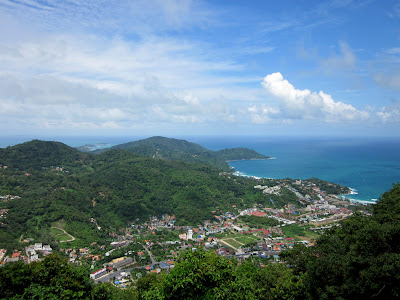 We stopped at a shrine where it was apparent how much the elephant is part of Thai culture, with literally hundreds of elephant effigies of all sizes draped with garlands of flowers. 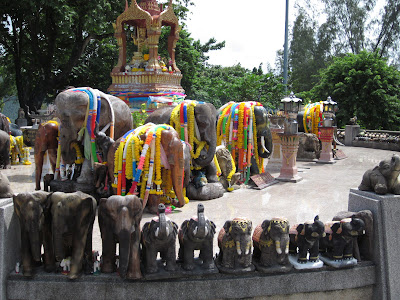 Next stop was to look at the Big Buddha statue at one of the highest points in the south of the island and boy, was it impressive!  Close to 50 metres high, made from concrete and was in the process of being covered entirely with marble tiles about 150 mm square and 15mm thick - that's one heck of a lot of marble and one heck of a cost.  Clever fund-raising though.  For 100 baht (about US$3), you could buy a tile, put your name on it with a felt tip pen and it would be cemented in place, name side down! 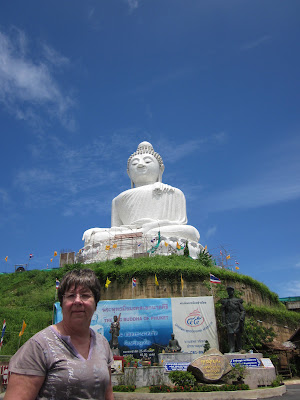 Big Buddha from a distance 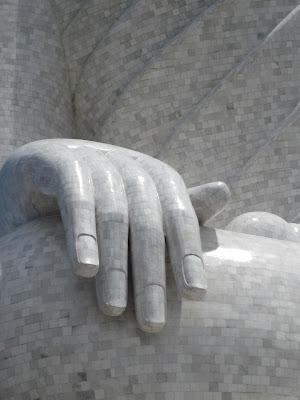 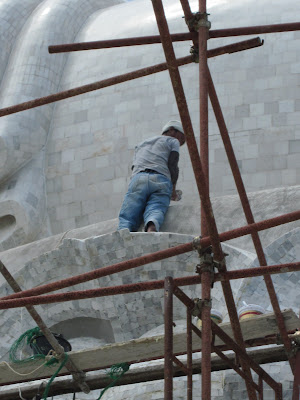 Sticking on the tiles - what's OSH?

Next stop was Wat Chalong, a large temple complex which was maintained in impeccable condition and the ornate architecture was a joy to look at. 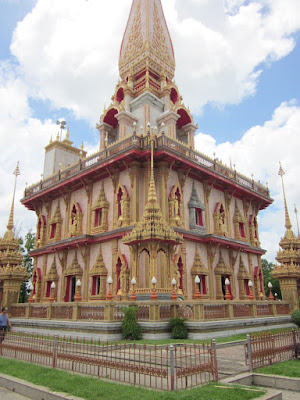 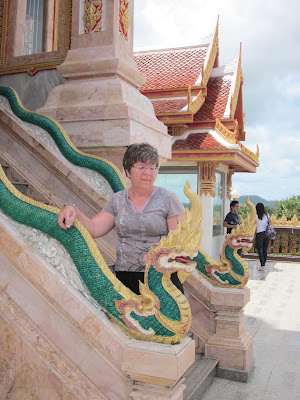 Standing in the direct sun for long without a hat was inviting trouble.  Jennie may have packed the kitchen sink when leaving NZ, but her sun hat was one notable omission. No worries though, a quick visit to a local market stall and parting with the equivalent of a couple of bucks or so solved that problem!  It's probably the right time to mention a really appealing trait of the Thai people - their great courtesy and politeness.  Stall holders and shopkeepers might ask you to buy something but if you say no thanks, that's the end of the matter and they'll still happily pass the time of day with you.  Contrast that with Bali for instance where you're continually hassled. The Thais are lovely people, with a great sense of humour. 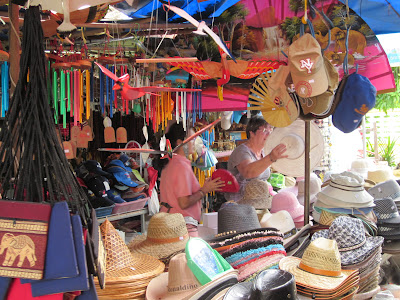 Hats, bags and anything else you care to mention at rock bottom prices

Here's where the day started to get expensive!  Before we headed back to the hotel, Jennie wanted to have a look at a renowned manufacturing jeweller in Phuket town.  Thailand mines its own precious gems and with the high levels of craftsmanship and low wage rates, the implications were that real bargains were to be had here.  Now I don't know how other members of the male sex would have handled the situation, but I'm a craven coward and also loving my better half to bits; had an inkling how this was going to end up.

The manufacturing side of the process was really interesting, right from cutting and polishing the stones, through to making the finished piece, be it a ring, brooch, necklace or whatever.  Entering the showroom was another story entirely, trying to look casual whilst trying to stop eyes watering at some of the price tags.  Question: How does a guy counter the argument that similar pieces would be hugely more expensive in the West?  Answer:  not a clue and neatly backed into a corner by the female of the species.   Inevitably, Jennie found a bracelet in white gold set with sapphires and diamonds which she fell totally in love with.  In an attempt to cut a deal, I suggested that it should be an advanced present for our 40th anniversary next year to which she readily agreed (with me having a mental picture of all the bike goodies I could eventually buy for an equivalent price).  The speed of the agreement lead me to conclude that the brownie points amassed by yours truly for this transaction will have probably evaporated well before I can get any bike gear.  Have other guys noticed the extremely short shelf life of  "guy points"?  Sigh........ 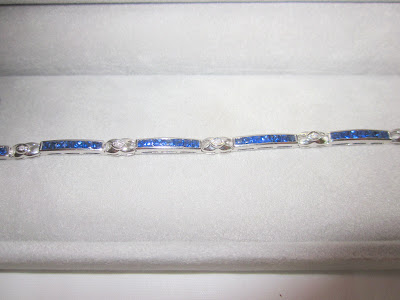 Nice, but not as nice as new leathers, boots, replacement helmet........