Nothing about bikes for a change but thought it may appeal to those with an appreciation of  technology, history and art.

It must be about 4 decades ago when I saw a TV programme on knife and sword-making using the Damascus steel (also known as pattern welded steel) process. It's a technique at least 1500 years old and is practically a lost art in the age of mass production. It’s how the original Middle-Eastern scimitar blades were made along with the Japanese Samurai Katana swords. One presumes that there must have been technology transfer even in those days, for them to have come into being at much the same time but be so geographically far apart.

The problem with ancient swords and knives was combining overall strength with a keen cutting edge in the absence of yet to be developed carbon steels and the Damascus process was the first to achieve those combined qualities.  Without going into too much detail, a billet of iron or steel is cut in half and forged together again whilst red hot. This is repeated multiple times to produce many layers, i.e. 9 double-ups produces 512 layers! This traps fine carbon layers from each slightly cooling surface and the layering process results in a blade which is incredibly strong and carries one of the sharpest and durable edges known. The Japanese allegedly used to test sharpness by cutting miscreants in half with one blow.  (Apologies if you've just eaten or are about to, but you'll get the drift about sharpness now!)

The principal difference between the Middle Eastern and Japanese methodology is that whereas a Katana is highly polished, the Middle Eastern blades were etched to expose some of the different layers. Depending on how the billet is spot-hammered or twisted during the forging process gives different patterns on the blade as these various layers are exposed during grinding and polishing.

As an engineer, I was blown away with both the ingenuity of the Damascus technique and the sheer beauty of the finished object. Owning one would be akin to owning a piece of history but that wasn't even a consideration back then.

Fast forward nearly 4 decades where the family had accumulated some nice art objects along the way. On a visit to Christchurch, we saw a one-off pocket knife in Damascus steel at an arts centre which had been made by a local forest park ranger. That was all that was required to start the yearning again and we decided that if possible, we would get a carving knife commissioned so it was both practical and an object of art which we could hand down as a family heirloom.

The Internet is truly a wondrous thing and lo and behold, we found 2 people in NZ with international reputations who still practised the ancient skill! After a bit of dialogue, one of them accepted a commission to make a carving knife for us. You'll understand that the manufacture of such a one-off item from scratch is not cheap, but neither is good original art.

A couple of months after sealing the deal, it arrived by registered mail and the result was breathtaking. It's a 10" drop point raindrop pattern Damascus ferrous blade, Canadian burr maple treated handle with etched copper fittings. It’s a truly stunning piece of workmanship and the only problem now is that all our 3 kids (who are great cooks) want to inherit it! Sharp is an understatement and the crisp “ting” noise when tapping the blade is something else!

The photos simply don't do it justice, but here are some anyway. The original file sizes are large so you can click on the photos to enlarge detail. 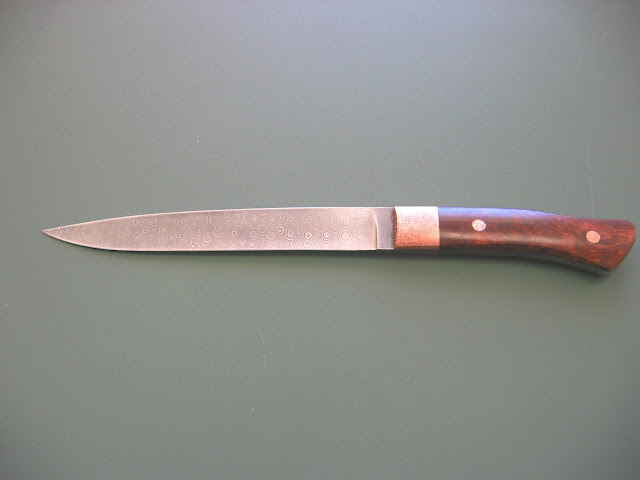 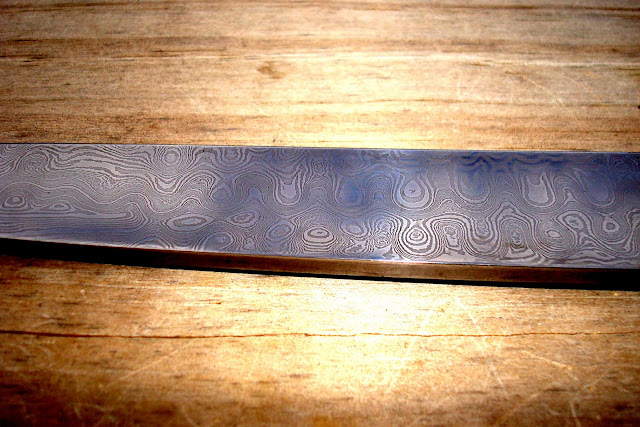 It's not that easy to see but along the top edge shot below, the major layers from the billet folding process are just visible. The burr maple has the most amazing luminescent grain. 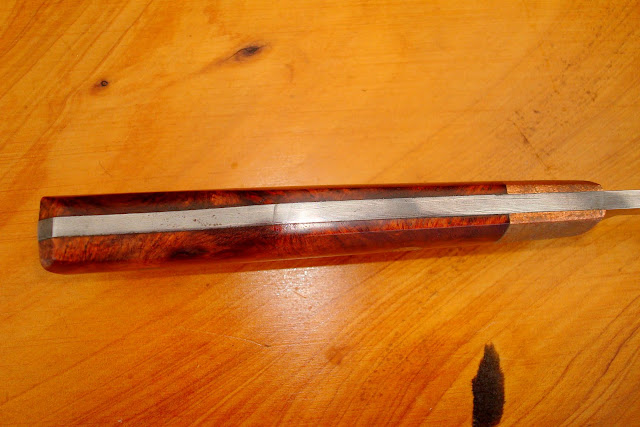 This commission gave me nearly as much pleasure as the emotional surge one gets from buying a new bike and the history connected with the process makes it ultra-special too.  It's wonderful that there are still craftspeople round the world keeping the ancient arts alive.

A word of warning though about "fake" Damascus steel.  There are kitchen knives available which purport to be Damascus because of the patterns etched on the blades but they're solid, not layered and not ferrous either.  Therefore, it's important to look closely and check provenance!  The ferrous blade is surprisingly easy to keep in good order, just a light wipe from a paper towel with a spot of cooking oil on it after hand-washing.  I really ought to make a mount or fancy case with a velvet liner for it to show proper respect rather than keeping it in a kitchen drawer.  Maybe we should commission a carving fork to match it......

If anyone is interested in breathtakingly beautiful Damascus knives, check these sites out:
Hoiho Knives  and Damascus NZ
Posted by Geoff James at 10:23