Night riding - love it or loathe it? 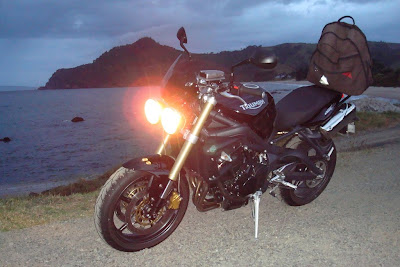 Nightfall, just setting off for a 200 km autumn ride
There have been some superb blog posts recently coming out of Canada and the USA about riding in adverse conditions and their "character building" nature.  Therefore, I thought I'd continue the general theme with some random musings for consideration about  Kiwi night riding experiences.

Night riding is something you don't see much written about in motorcycling magazines, either from the viewpoint of the effectiveness of headlights on various makes of bike or even tips on how you ride safely at a reasonable pace.  This leads me to wonder whether motorcycling is largely regarded as a daytime activity by most manufacturers, the motorcycling press and even a decent percentage of riders.  In the latter case, it's probably something that many people don't do a lot of by choice.

Let's start with a definition of night riding. I'm not talking about riding through town with reasonably high levels of street, office and shop illumination, nor the reduced levels of lighting out in the suburbs.  What I'm referring to is being out in the blackness of the countryside with no lighting at all on two lane twisty roads rather than busy major arterial routes.  If you don't ride a lot in these conditions (and with a few exceptions, I don't), it can be fairly daunting; especially as in rural NZ, wildlife ranging from little furry things, larger woolly things and even through to big horny things all want to share the road with you on the odd occasion after dark!

Despite all the apparent risks, night riding is an incredible means of making you more complete as a rider.  Done properly, it sharpens your situational awareness skills and smooth riding techniques immeasurably which pays off in spades for normal daytime riding too.

How good or poor your lights are clearly has a bearing on both enjoyment and the opposite end of the scale too - the dreaded  "pucker factor"!  Your own skills and mindset are the other critical ingredients.  From a personal perspective, one of the few times I do what might be described as serious night riding is on organised endurance events which start off in daylight, run all through the night and finish sometime the next day.  This is at the extreme end of going out for a night ride but the techniques are really no different from heading off for a shorter run.  When you're comfortable with night riding, there's something very special about travelling in a little bubble of light, eating up the miles. 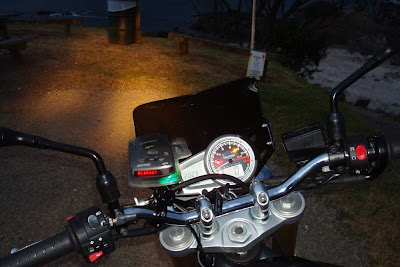 Lit up like the bridge of the Starship Enterprise

In terms of enjoyable night riding experiences, two come to mind; one riding solo and another with a group of other riders.  Hopefully, the reasons for them being enjoyable will become apparent.  The first was pre-retirement when I used to frequently commute 200 km from home on a Friday evening after work to our beach house that we now live in permanently.  The roads were one lane in each direction with a few straights but mostly sweepers and twisties.  The road was well known so that removed any mental apprehension about what to expect.  The journey itself was also of sufficient length that it was possible to start at twilight and "dial" into the ride and relax -  an important consideration.  The relaxed mental attitude was critical for concentration and heightened situational awareness which included a decent focus on chasing the "vanishing point" for correct corner positioning and entry/exit speeds.  Riding in the dark, you are also able to see small objects in the road, loose road metal etc. much easier than in daylight as the headlights cast shadows off even small items.  Travelling in the relatively small cocoon of light cast by the headlight seemed to remove extraneous distractions and focusing on the task at hand felt almost automated.  In fact, the fastest commute to the beach was done entirely in the dark.  I wasn't hitting the highest momentary speeds of a normal daylight run, yet through what I'd like to think was a smoother ride overall, a minute or two was shaved off the elapsed time, despite traffic densities being comparable.

The second example was on a 1000 miles (1600km) in 24 hours endurance ride in 2003. There were 4 of us riding together, with a high degree of trust in each other's abilities.  That takes a lot of stress out of any ride for starters, particularly in terms of having company if any problems are encountered.  Having already covered about 900km and well in the groove at somewhere past midnight, we found ourselves in volcano country in the central north island at an altitude of close to 3000 ft.  It was a clear night and the starlight alone was sufficient to brightly illuminate the snow on the upper reaches of the volcanoes.  Just 4 bikes and nothing else on the road with the sky and snow ablaze with light. As close to a mystical experience as one is likely to get without the ingestion of chemical supplements.  Again, being in the groove and the ability to relax with trusted friends in close proximity made good riding habits completely subconscious, allowing time to thoroughly appreciate the surroundings. "Zen-state" riding at its best!

Our first ever 1000 miles in 24 hours ride, early a.m, 1996.  Yellow blob in corner is a mate cat-napping (or possibly unconscious)!
One of the least enjoyable night rides was on an early 1000 miler where we were a long way from home in unfamiliar territory.  The road was narrow, no centre markings and there were continuous bends but it had plenty of grip. We were warm, there was no great risk yet I was rigid with tension which was causing fatigue; my thought processes had appreciably slowed up and I was riding with poor anticipation (gun-shy is a better description).  In hindsight, I'd almost certainly let myself get overwhelmed with apprehension about the narrow, twisty road we were travelling on rather than relaxing and simply sticking to the basics of riding smoothly.  In any event, it was all to do with my mental approach on that part of the ride rather than the conditions themselves.  I'd simply talked myself into not enjoying it.  Not that it applies in the case of "normal" night riding but I've noticed that on endurance rides at around 2-4 a.m, I don't really get tired, but I do get quite anxious and wonder whether the body clock trying to shut down releases chemicals that cause anxiety when you are forced to remain awake.  Maybe a physiologist would know.

So in trying to summarise personal thoughts about the skill sets for good night riding, it seems to be no different for those required in daylight riding BUT needs to be applied with a little more concentration than maybe we tend to in the day.  Heightened situational awareness, scanning all around and out to the limits of the headlight, attention to the vanishing point on corners and relaxing are just some of  the things which make a huge difference to enjoyment and safety. Relaxing is probably an easier proposition on a longer ride or if you set off in daylight so there is time to gradually adjust or dial in to the conditions. The other thing which undoubtedly aids the mental state is being adequately dressed in terms of warmth.


Unsurprisingly, the biggest bar to enjoying a night ride is a poor headlight.  What is surprising, however; is just how poor the standard headlights are on some modern bikes, particularly those with sporting pretensions.  Perhaps the manufacturers don't expect them to be ridden very far in complete dark.  My old BMW K100RS with its large oblong headlight (photo above) wasn't bad but was improved immeasurably by fitting a relay and a 100w halogen bulb.  The same modification was performed on the Blackbird and whilst it was fantastic on straights and sweepers, the physical shape of the headlight gave a sharp sideways cut-off which was quite unsettling when leaned well over in pitch blackness on tight corners.  Form over function by the designers methinks and probably a common occurrence on a lot of modern bikes.

The Street Triple twin round headlights give an excellent spread of light, but intensity in standard form is barely adequate.  They are also set too low during assembly. The relatively small volume of the lamp housings makes fitting higher temperature/wattage bulbs (i.e 100w) a possibly risky proposition.  As an intermediate step, the standard bulbs have been replaced with Osram Nightbreaker bulbs of the same wattage and what a difference!  The illumination is SIGNIFICANTLY better - why oh why can't the manufacturer fit better quality bulbs as standard?  The photo below shows the difference between the standard bulb and the Nightbreaker in daylight.  In the dark, it's even more pronounced.  The standard bulb on the left  is quite soft and yellow.  The Nightbreaker on the right is much whiter and more intense. 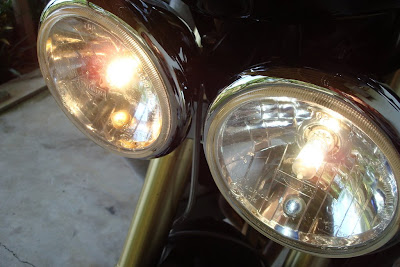 Standard bulb left, Nightbreaker right
As an aside, I tried 100w blue-white xenon bulbs on the Blackbird.  They didn't seem to illuminate greenery at the roadside as well as the 100w halogens.  Where they did score appreciably however was in daylight.  It was really noticeable how much earlier car drivers detected your presence and moved over if you were closing on them from behind.  That has to be a significant safety consideration given that most collisions or near-misses occur as a result of the "I didn't see you mate" excuse of cage drivers.

Fitting HID lights is another option but as I only do seriously long night rides about once a year, the upgrade to Nightbreakers is probably sufficient for now (we hope).

Actually, I'm not entirely sure what the purpose of this post has been, other than to ramble on more than a bit to help clarify in my own mind why I should get out more for decent length night rides in a range of different weather conditions, particularly in preparation for the big ride in October.  There's little doubt as already mentioned that  it sharpens your awareness, road positioning and makes you ride smoothly.  That's got to be a good thing, hasn't it?  Hope it all makes sense.
Posted by Geoff James at 09:49