Following on from the last post about wet weather gear, it's only a short skip to cold weather riding.  One of my friends lives in Central Otago, an inland area of the south island of NZ.  It's stunningly beautiful, sparsely populated and the climate can best be described as "continental" - low rainfall, up to 35degrees C and beyond in summer and down to -15degrees C in winter.  They breed them tough down there as Malcolm rides his bike to work in all but the harshest conditions.  He reckons that at minus 6 degrees, it starts to get a bit tricky because even with the coarse chip of south island roads, you start to lose mechanical grip.  Personally, I'd be more worried about losing digits and other extremities but what do I know; I'm just a soft north islander.

The photo is of Malcolm riding his Suzuki GS1200 SS down his kilometre-long dirt drive in the middle of winter.  Pretty heroic if you ask me.  Common sense has prevailed though.  He now owns a VStrom 1000 which is probably more suited to the winter conditions! 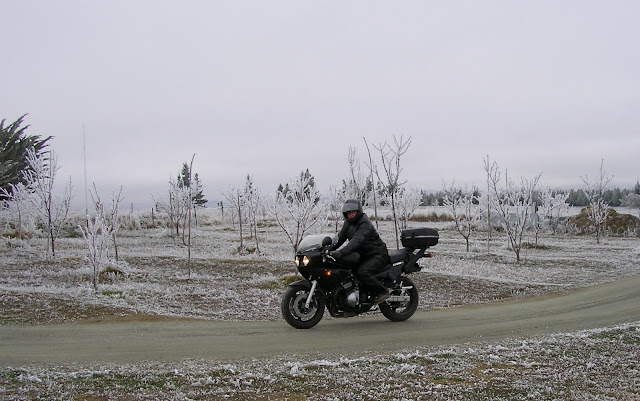 Keeping the winter connection, when I lived in the UK, there was a motorcycle event held every Boxing Day in Northamptonshire called the Wild and Woolly Scramble.  Scrambling being the quaint earlier term for what is now motocross.  The track was laid out through the fields of a working farm and testing conditions is an understatement - snow laying on the top of metre-deep mud in some places.  Great for spectators but not so hot for the competitors.  No such thing as a pressure wash for the bikes either.  The photo was taken by me in 1968.

A study in abject misery!

The following photo was taken at the same event in 1969 but clearly in better conditions.  There's a bit of pedigree here as the photo is of Don Rickman , co-founder of Rickman Motorcycles who made nickel-plated frame "Metisse" kits for just about any type of motorcycle on the planet, including GP bikes.  Note the safety gear of that era - rugby shirt, leather pants and boots and not a bit of armour to be seen! (And temperatures hovering around freezing). 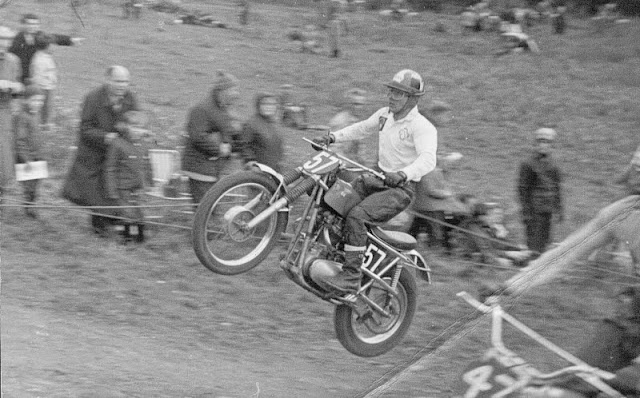