Spent a few useful hours adapting "stuff" to suit the Street Triple last weekend.  Up until now, I've thought that paddock stands in NZ have been overpriced, so have washed the rims and lubricated the chain by wheeling the bike along a bit at a time because there's no centrestand on the Triple.

A recent chance remark by a friend about custom bike parts revealed a local company that makes aftermarket components for a range of bikes, including paddock stands.  A perusal of their website House of Custom revealed paddock stands which were about half the price of others I'd seen, meaning I could slip a purchase through without an inquisition; or being made to stand in the naughty corner by the Chief Financial Officer *snigger*. They didn't make a stand specifically for the Triple, but it looked as if the Ducati/Aprilia one might do the trick.  It was duly ordered and arrived 3 days later.  Beautifully-made with cadmium-plated brightwork and rubber bump stops on the underside to stop trapped fingers or paint scuffing.  Given the price and quality of these, others on the market are a plain rip-off.

The only thing I had to do was get a couple of 6mm metric H.T bolts and cut up some thick wall stainless tube I had laying about to make a pair of bobbins to screw into the swing arm for the paddock stand to hook onto.  Result - beautifully stable and ready for business. 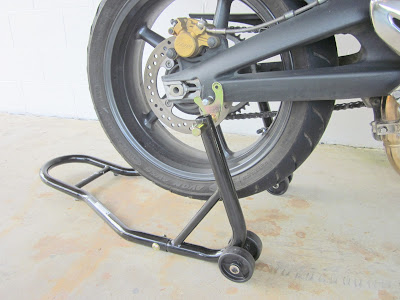 Beautifully-made stand at a sharp price 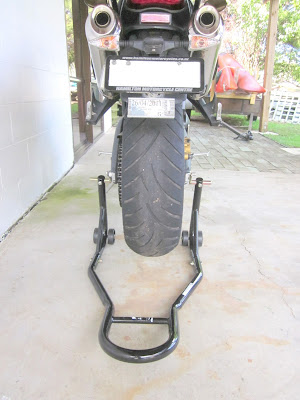 
With the absence of a centre stand or a paddock stand, it's also quite difficult  to check the wheel alignment.  This has been niggling me because I have yet to find a tyre fitting outlet that consistently gets it right and I'm now on the second set of tyres from new. I religiously checked alignment on the Blackbird whilst tensioning the chain or after a tyre change as misalignment can adversely affect handling and tyre wear. This post from March 2010: Wheel Alignment details the simple laser alignment rig I built for the Blackbird.  Unfortunately, the new paddock stand height meant that the old rig wasn't suitable.  A quick hunt through the shed revealed some materials which would do the job and the key bits of the old one were transferred.  (And our better halves have the cheek to complain about guys hoarding stuff, sigh.... we're only trying to save money!) 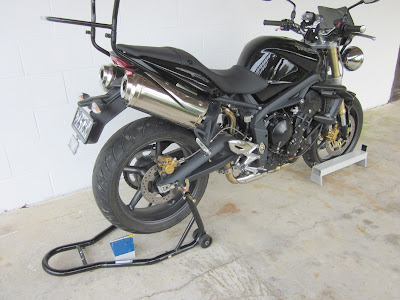 Voilà! A few hours work in the shed and the result was lots of convenience and time saved for maintaining the bike in the future.  Oh... and yes, the wheel alignment WAS out by a fair bit.  Not only can tyre fitters be a bit slack, but there's sufficient play in most chain adjusters to mean that without a proper means of checking; you could have a problem and not be aware of it.

One final thing....  the Blackbird had a Scottoiler chain oiler which worked superbly although there was a bit of lubricant fling which made the rear end of the bike just a little messy in places. For various reasons, I haven't bothered with one on the Striple and so far; have tried Spectro chain wax and Motul spray-on lubricant.  Both "seemed" ok although the Motul product is tacky and attracts a bit of dirt.  I'd been reading glowing reports of the DuPont Multi-Use dry wax lubricant with Teflon and molybdenum on several bike websites so have picked up some to try.  Apparently, the chain stays completely clean and there's no fling from the clear film.  I'll be keeping an eye on how it performs in the coming months.

Addendum:  The DuPont lubricant is brilliant stuff.  Haven't needed to adjust the chain between tyre changes, the chain stays clean and it doesn't fling.  Normally apply it when the chain is warm, every 400-500 km or thereabouts.  I think it would last longer than this interval with no problem. 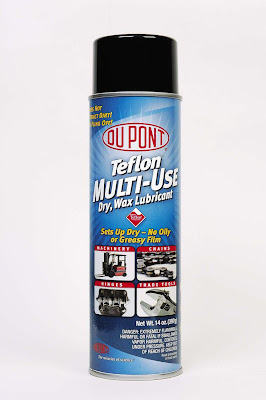