What's age got to do with it?

The title is just one word different from Tina Turner's classic song, but a whole world of meaning away!

A few days ago, I had an email from David L Hough in response to the recent Speed doesn't kill, stupidity kills post, plus other posts on motorcycle safety. If David's name doesn't immediately ring a bell, he's an eminent American author on motorcycle safety and skills (see Wikipedia entry) and I felt somewhat humbled and a bit over-awed that someone of his eminence had bothered to get in touch with an average Kiwi rider.  However, I felt a bit more comfortable when he said that on reading some of my blog posts, it was clear that I'd been thinking about my age relative to riding a motorcycle, which is perfectly correct. 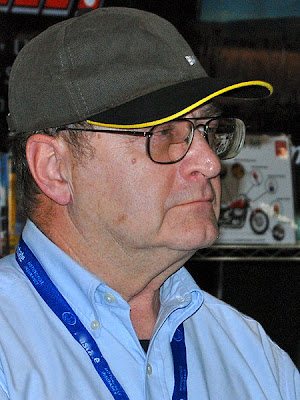 By way of background, he mentioned that was 73, had travelled over a million miles by bike - an incredible pedigree!  He went on to say that 3 years ago, he'd had an accident on a BMW 1150 GS in a remote desert area of California and as a result of that and presumably considering his own mortality;  now rides a Can-Am Spyder.  He went on to say that the mean age of motorcyclists in the USA is increasing, indeed accelerating.

David asked what, if any, thoughts I had with respect to increasing age and its impact on my riding.  Part of this enquiry was whether I had a plan for the next 5, 10, 15 or 20 years. I thought that the topic was both interesting and relevant, especially as motorcycles have progressively switched from cheap transport for impoverished young people to more of a lifestyle choice for riders of all ages.  In terms of ageing, I guess the term is pretty broad as we're all ageing as part of the natural process and I have no difficulty including returning riders after raising a young family or establishing a career etc.

I retired at 60 to enjoy life whilst my wife and I enjoyed good health.  Not long after retirement, I was undertaking a short-term consultancy job for my old company and I'd been to a conference on their behalf.  I used my Blackbird and on the way home, had a walking-speed accident when my foot slipped on gravel when turning round on a narrow road.  The fairing crash knob hit my leg and it suffered internal bleeding.  My fault entirely for failing to notice the gravel.  The 2 months away from riding and hobbling around gave me plenty of time to ponder the future.  I'm completely passionate about riding and must say that giving up never entered the equation but what to do?  The Honda CBR1100XX Blackbird I'd owned for 8 years was a little tall for me (I'm 5' 8"), especially with its raised ride height to improve handling.  The centre of gravity was also quite high.  This lead to some degree of instability when manoeuvring at low speed or parking.  As I aged and lost a bit of muscle tone, it became more noticeable.  It was also exacerbated by road cambers in the area where we now live and also the off-cambers around our house which is on the side of a hill.

The answer was to get a lighter, lower sport-orientated bike with good ergonomics.  More difficult than you might think.  I still wanted handling and performance but the number of bikes with a seat height of around 800mm excepting cruisers are in the minority.  The other obstacle was to put it crudely, "little dick syndrome"!  I was used to riding the Blackbird hard and fast with my riding partners, most of whom are younger than me.  I honestly felt that getting a smaller bike would be akin to losing a bit of my manhood.  Ludicrous, but that's how I felt.  To cut a long story short, subsequent ownership of the Triumph Street Triple has been a joy on all counts and a smart move.  It's rejuvenated my motorcycling enjoyment.  Incidentally, you'll find more detail about all this in my blog posts from about 12 months or so ago, including a photo of a rainbow-coloured leg!

However, I thought I'd share other relevant bits of the discussion with David so far in case others have been thinking about the subject and might wish to articulate their thoughts. 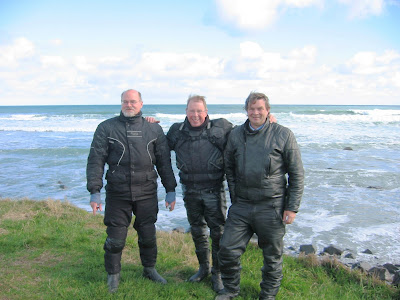 Old dog, new tricks!  Yours truly (centre) with great mates, having successfully completed the Southern Cross round NZ in 5 days endurance ride in 2005

Chronological age is clearly going to have a bearing on fitness to ride in terms of physical condition, mental attitude, reaction time and so on.  However, such factors will have such a huge variation between individuals that age itself will have little relevance across the board.  Skill level certainly will have a major bearing. In the recent post on advanced situational awareness coaching, one forum respondent asked what was the point of him wasting time in undertaking any advanced training when all he wanted to do was cruise slowly on his bike and not bother anyone.  It sounds like he missed the point that good situational awareness is applicable at all speeds in terms of keeping you from harm.  Now coming directly to the point, any skill (or physical activity) if not regularly used diminishes, probably more rapidly as we age.  This is why I'm a strong advocate of refresher training, particularly as we get older - probably the most important consideration of all.  Not only is it beneficial for its basic purpose, but I suspect that it could also be a good personal "honesty" indicator with respect to whether you can cope any more.  Incidentally, I now try to cycle regularly too to keep up basic fitness levels!

I don't have a long-term plan other than to keep riding as long as possible.  This isn't just a blind faith option, simply a statement of intent as I love it so much.  Switching to a Street Triple with its lighter weight meets current requirements perfectly.  I'm not opposed to owning a cruiser with their low C of G and correspondingly low seat height - it would certainly entice Jennie back onto the pillion.  Maybe I ought to give one a try.   Maybe an English classic or the modern equivalent.  So in short, although I don't have a clear plan, there are some options when the next stage comes. Have done a fair bit of roadcraft training but have never done a coached track day yet so at 63 years of age, that could well be addressed this year!

Mental attitude, or call it a love of life if you like is probably as important as any of the other factors.  I've had a number of other strong interests at various stages of my life including sailing competitively at national championship level but motorcycling is the only interest that I've been enduringly passionate about.  It would certainly leave a big hole if I was to give it up BUT.....!!!!  To have no interests is to wither and die.  Living on the coast, we have a boat and go fishing regularly.  Jennie has a tweaked open-top sports car which is huge fun to drive and should I just be restricted to driving a car, something like a Lotus 7 replica might be sufficient to keep the juices flowing! We also enjoy travelling.  What I'm saying is that I do have some fall-backs for when the time comes to give up motorcycling.  Life is for living and I'm not the sort of person who could currently just sit around, waiting for God! 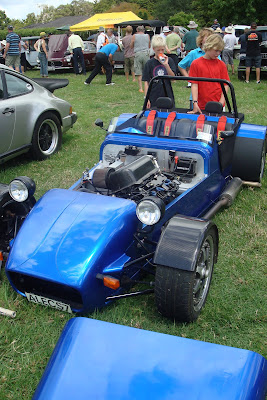 Sooooooo......  to finish off with some of David's questions, are we capable of making honest judgements about our fitness to ride? What are the measurements or tests to determine whether you are fit to ride? Is a crash an indication you aren't fit anymore, or just bad luck? Do you give up riding just because your knee, ankle, or back have chronic problems? Or do you stay off the machine when your body is complaining, and ride only when it allows you to? And, most importantly, if motorcycling has been your primary interest in life, how do you deal with your interests waning?  Food for thought for a fair percentage of riders perhaps.

Also, I finally found a training programme with the Institute of Advanced Motorcyclists (IAM) that has raised my competence beyond what I thought possible - literally a life-saver.  To read a synopsis:
http://geoffjames.blogspot.co.nz/2011/11/raising-my-riding-skills-some.html