Singapore
Gary and Sue stayed on to explore the Mekong Delta and then hop into Cambodia so it was just Jennie and me who took the shortish flight south to Singapore via Kuala Lumpur.  Dad was stationed there with the RAF in his early career and we were keen to see the place, even though it had obviously completely changed in the intervening years.  It's an island of some 700 sq km with a population of around 5 million of mainly Chinese and Malay descent.  It's connected to the Malay Peninsula by road bridge and is a business hub for S-E Asia with strong British connections.

Leaving the airport for our hotel late afternoon, we were immediately struck by the cleanliness and orderliness of the place.  The 15-odd km from the airport to our downtown hotel was planted with beautiful, flowering shrubs the whole way - looked like something out of Fantasy Island!  Singapore has an international reputation for strongly enforcing the rule of law.... the death penalty for drug trafficking, right through to $1000 fines for littering, smoking and drinking (even water!) on public transport and so on.  Jumping ahead a bit, but to illustrate the obsession with orderliness, we took a photo of a sign hanging in an amphibious vehicle we took a trip in.  Apparently, yawning on the trip is right up there in the heinous crime stakes along with eating and smoking - absolutely hilarious! 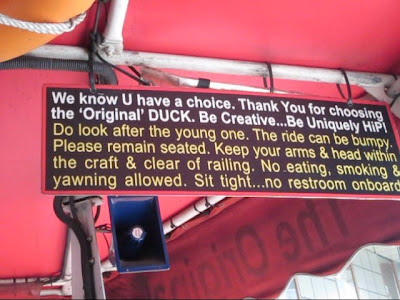 No yawning, by order.  Understood?

The central city and river waterfront is a curious place by day.  The Singaporeans are all tucked inside office blocks and shops, making money.  The only people wandering about in the mid-day heat and glare are tourists, and not too many of them either.  It's true what the song says about "Mad dogs and Englishmen go out in the noonday sun" !  It's only after dark when Singapore kicks off with a vengeance.  We had our first meal by the river at Clarke Quay in an open air restaurant not far from the hotel.  Like most Asian food, it was utterly delicious and beautifully presented.  However, priced like Vietnam it wasn't!  Costs were higher than an equivalent meal in NZ and it was a good job that we were only staying for a couple of days. 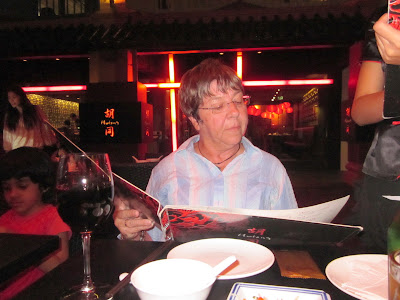 Mmmm... and what culinary delights will we try tonight? 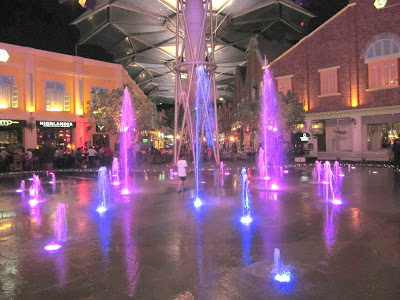 Despite the high prices at the more upmarket restaurants, prices were more reasonable (but not by Vietnam standards) at the ethnic eateries outside the city centre and in the Little India area, there were kiosks catering for every taste. 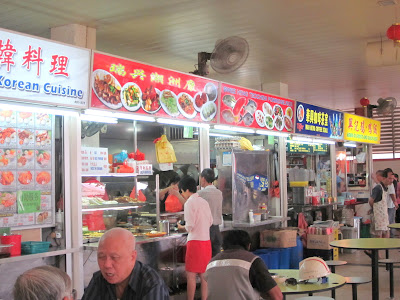 During the day, we explored the city and whilst there's some old architecture, Singapore seems hell-bent on staying as modern as possible.  Fortunately, the quality of the modern architecture is beautiful and innovative so it's not an uninspiring eyesore like many modern cities. 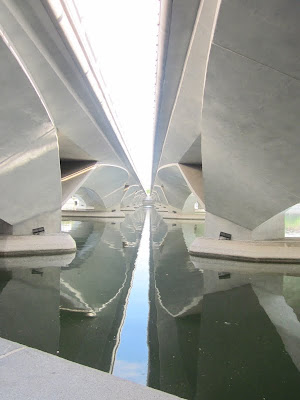 Arty-farty shot of 4 lane river bridge from below

The photo below is of a 280 metre high triple tower hotel with a casino in the basement and a boat-shaped observation deck on top, complete with large infinity pool.  Hmmm... not sure about swimming in that!  The lotus flower-shaped structure is a museum of technology and art. 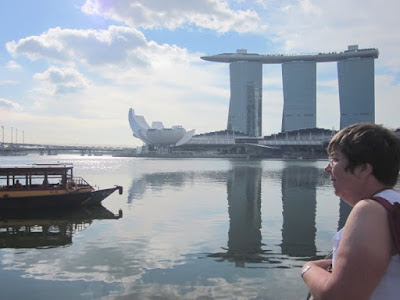 Not your usual skyline


A visit to the botanic gardens had us slack-jawed for the whole time we spent there.  It's absolutely world- class and the volume and variety of orchids and lilies growing there in the open air is simply staggering. 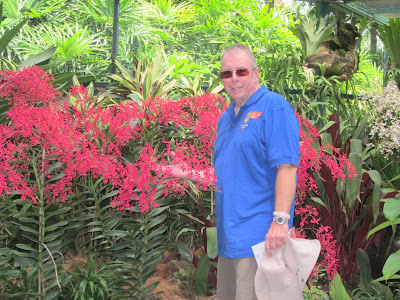 Just some of the incredible orchids

That evening, we went on a "Night Safari" which was excellent.  It's a sort of zoo which has been designed to look like a natural jungle.  After dark, a small truck pulling open carriages takes you round to see the animals including tigers, rhinos and so on.  There's only low-level lighting to heighten the atmosphere and with no flash photography allowed, it wasn't possible to get any photos.  Innocuous animals like deer and so on wandered freely where we were but the things that were keen on eating you or trampling you to death were separated by very discreet security measures which were difficult to spot.  A really worthwhile outing.  I did take one photo there though - among the food and souvenir stalls at the Safari was an elongated tropical fish tank with a seat along one side.  For a modest charge, you could dangle your feet in the tank and the tropical fish would nibble off the hard skin.   It was extremely popular among womenfolk and by the delighted screams, I sincerely hope that their partners aren't going to find themselves redundant. 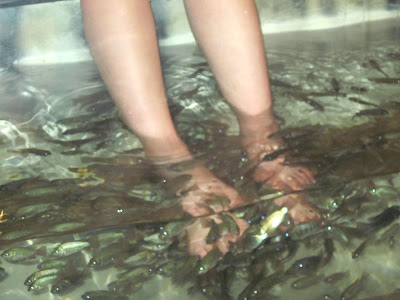 Next day, we'd booked a morning trip on an amphibious vehicle to see sights on the river and around town.  Close to the departure point, there was a tent selling "Drive a Ferrari or Lamborghini convertible  round the Singapore streets".  Really tempting but suspect that it would have needed a wallet considerably fatter than mine! 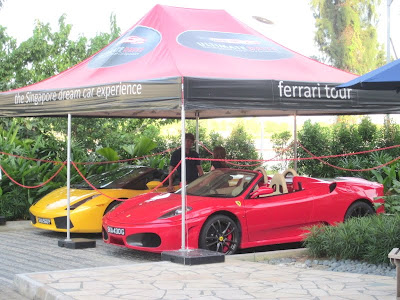 The combined river and road cruise in the amphibian was an absolute delight with great views of riverside buildings. 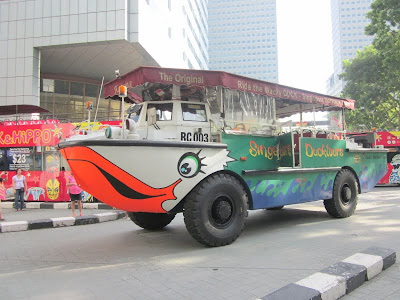 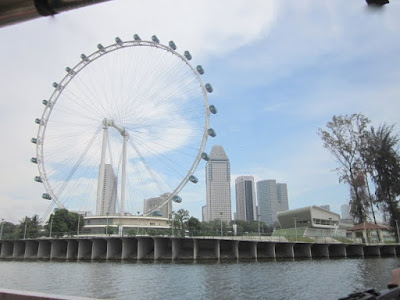 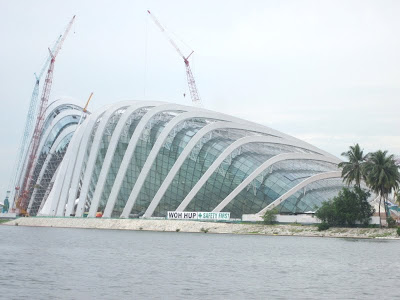 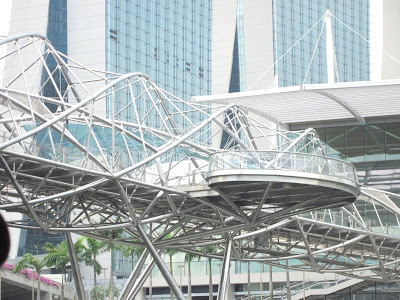 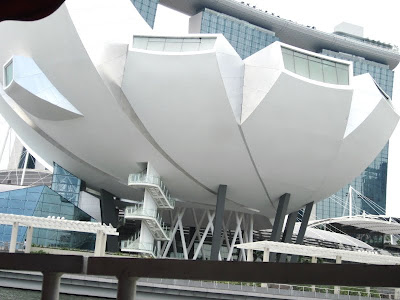 The photo below is a temporary self-contained apartment for tourists, $175/night.  It's built over a large statue which comes up through the floor from the steps below!  Due for removal in the near future. 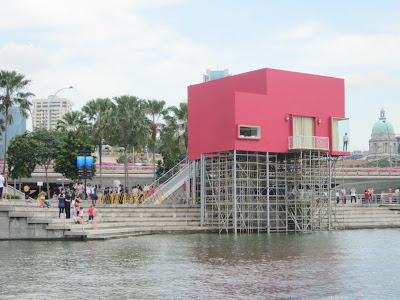 Wonder where the waste water discharges??? 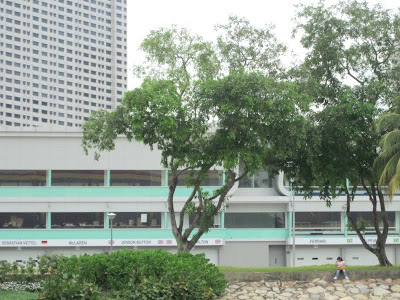 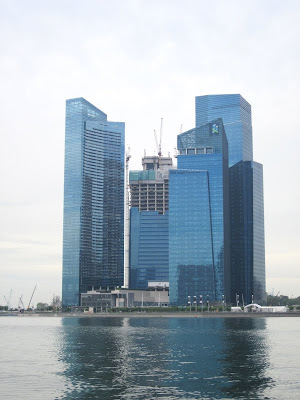 A word about things automotive......

Big bikes abound and as stated in the first post about our trip, Singaporeans seem to scoot over to Malaysia for their fun on account of the better motorcycling roads and undoubted more relaxed attitude of the gendarmerie to a bit of speeding.  Given the strong approach to law and order in Singapore, speeding probably rates up there with drug trafficking in terms of penalty.

All the cars are modern and immaculate.  We speculated that there were laws against dirty vehicles too but one local told us that an immigrant labourer kept hers clean inside and out for $30/month!  Owning a car in Singapore is pretty expensive.  There seems to be a thinly-disguised congestion tax as the local said that even before she bought her 1600cc car, there was a $40,000 ownership permit which had to be applied for, lasting just 10 years. 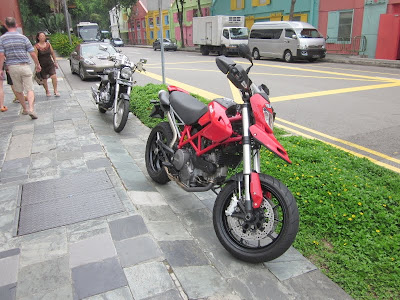 Ducati Hypermotard with Chinese single cylinder cruiser in the background

As we headed for the airport to catch our flight back to Kuala Lumpur and then bound for home in NZ, Jennie and I reflected on our Singapore experience.  Architecturally-stunning and immaculate but pricey compared with other Asian countries.  Some of their laws, especially for serious crime seemed pretty fair whereas other lesser ones appeared a bit draconian. Maybe that's the price to be paid for a regulated society where crime statistics looks to be exceedingly low.   However, Jennie's remark that the place lacked soul, was sterile and resembled a giant theme park summed it up perfectly.  On further reflection, it also reminded me of the town in Jim Carrey's movie, the Truman Show!  We'd certainly recommend it for 2 or 3 days as a stop-off point en route to somewhere itself but definitely not as an end destination.

Well, that concludes our Excellent Adventure and hope that you've enjoyed the ramblings contained in each part. If you fancy going to intriguing, adorable Vietnam, my recommendation would be not to put it off for too long as it will inexorably drift closer towards western culture.  It would be a tragedy if that happens too quickly.

Finally, an amusing incident which has never happened before.  We got home late on a Sunday afternoon and because our body clocks were out of whack, sleep was a pretty broken affair.  The next night, we crashed except that I needed to visit the bathroom in the middle of the night.  The scrambled remains of my brain said that we were still in a hotel in Vietnam but which one?  I shuffled round the bedroom in the pitch black trying to find the bathroom entrance.  Having failed dismally, I then found myself in an another bedroom which I took to be the bedroom of another hotel guest and fled back to our room where I sat on the edge of the bed for a good 5 minutes until it all clicked.  You'll be delighted that I then found the designated receptacle with no further difficulty and slept the sleep of the innocent!  Funny what sleep deprivation does!