A week or two back, fellow Kiwi blogger Roger mentioned that he'd bought a Sena SMH10 digital motorcycle communications system like mine and he hoped that I'd post a technical review based on my experience of the same unit.  This isn't a review of the Sena as such, more of a review of the thought processes to sort out what features you need for your particular type of use.  From research carried out before the purchase, it was clear that there are some great models on the market as well as some real clunkers.

As with most things, the decision on what to purchase very much depends on price and what you want to use it for. Consequently, there's no such thing as one best unit.  What I'll do is summarise my decision-making process and hope that if others are in the market for a comms set, it helps in deciding what's best for their particular needs. 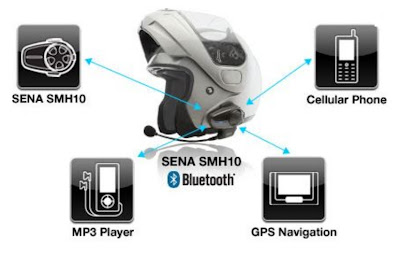 
What might come as a surprise is that I personally don't like bike comms!  When Jennie used to be a regular passenger on my Beemer and Blackbird, some hints were dropped that it would be nice if we were able to chat en route.  These hints fell on stony ground as riding a bike is my "quiet time" - time to think about riding well, taking in the sights and smells and so on.  I don't want interruptions, particularly at critical moments.  I don't ride with an MP3 player, even though music is almost always on in the 4x4; if not Jennie's convertible.  There always seems to be enough going on to fill the senses on a ride without other distractions.  That's a purely personal decision and it's certainly not being critical of anyone who enjoys music on the move.  The same principle generally applies to phone calls - that's what voice mail is for so I'm not a slave to the bloody thing!!!  Different kettle of fish if you're expecting a vital business or personal call though.

Having set the background, we'll now get down to why I bought a comms system.  When I was an IAM (Institute of Advanced Motorists) Associate in training, two of the Examiners used identical old-fashioned comms systems to give me instructions, particularly what directions to take.  The business end of the system consisted of a coiled thin audio tube which carried the conversation directly to the ear via an MP3-type ear bud.  They were horrible things - the voice commands were indistinct to say the least and the tube, despite being looped over the top of my ear; gradually worked its way out of the ear canal.  Not good for stress levels when you're being tested!!! Now that the boot is on the other foot with me observing Associates, I wanted something which delivered high quality 2-way sound between 2 riders and equally importantly; it had to be simple to use whilst on the move.

Another IAM member has a Scala G4 set, which impressed the heck out of me in terms of clarity, features and being compact.  A comparison between the two was then undertaken, drawing up a matrix of the different features for comparative purposes.  Each of them have slightly different features but either would meet my "fitness for purpose" requirements admirably.  I'm not going into detailed comparisons here as anyone can easily do the same through the excellent You Tube comparisons and other internet sources.  However, the main personal selling point was the large "jog" dial shown in the photo below. 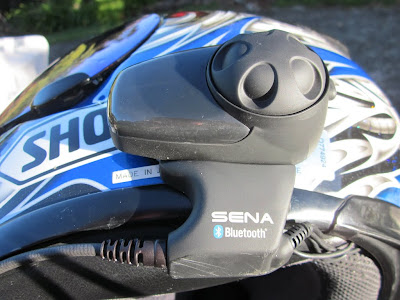 The dial controls volume by turning or switching between different riders and/or mode by tapping it.  The size and simplicity makes it so easy to use, even with winter gloves.  Although the unit looks large in the photo above, it's extremely compact as shown in the photo below and there's no additional wind noise or turbulence with it fitted. 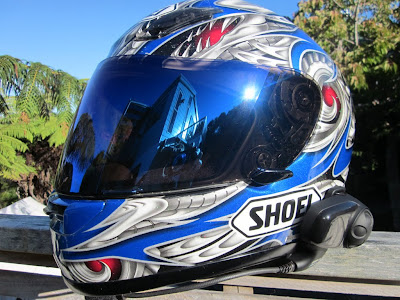 Sena SMH 10 on my Shoei helmet

The speakers have a backing which attach to the helmet lining material or if the ear space is unlined, a small strip of self-adhesive Velcro. 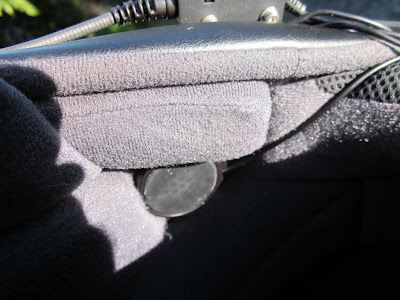 The microphone is on a flexible stalk which can be bent to any position.  I have it slightly to the left of my mouth as shown in the photo below and it works perfectly. 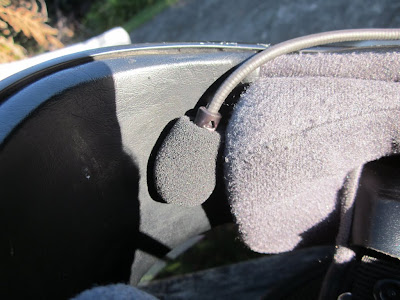 There are several modes of operation but the one I prefer when interacting with a trainee is voice-activated (VOX).  Not having to remember to press a button is far less stressful for both parties!  An IAM check ride generally lasts for 2-3 hours which is way inside the claimed 10+ hours of operation on a fully charged unit in this mode.  I have no reason to disbelieve the claim.  Clarity of communication is simply amazing.  Sena claim that communication up to 1000 metres of separation is unaffected.  I haven't tested the ultimate range as I've completely lost the plot if the rider I'm assessing has got that far away from me!!  I have, however, noticed that communications degrades if the bikes are separated by a bend with a sheer cliff or other major obstruction.  This hasn't been a real issue to date as it normally only lasts for a few seconds.

The other feature I like is that it can be installed on a helmet and be ready for use in under 5 minutes - important if you're on the road and switching between students.

As stated earlier, there are lots of comms sets on the market, some good, some decidedly dodgy.  There's an equally wide range of prices too.  Units like the Sena, Scala and Baehr are without doubt at the top end.  Also as mentioned, each make has different features which fit different "fitness for purpose" requirements.  If you're in the market for a comms unit, I'd recommend that you carefully think about what features are likely to be important for your particular set of needs and then draw up a matrix where you can compare what the various brands offer.