Jennie was due to fly out for a Mediterranean 3 week "girlie cruise" on Sunday, so Saturday was earmarked for some "together" stuff.  As it happened, the weather and tides were perfect so we took the boat out fishing in the morning.  Right on the edge of winter and a balmy 18 degrees C with no wind - absolutely perfect.

We anchored up in 25 metres of water among the commercial mussel beds and basically, as soon as the first bait hit bottom, it was all on!  We were only out there for just over 2 hours and got our daily combined maximum limit of 18 Snapper - one of the best days ever. 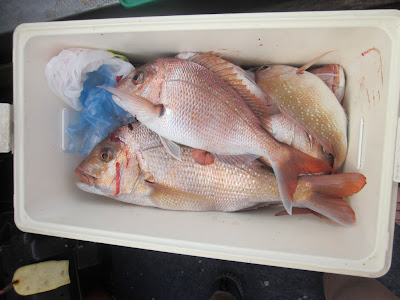 The big chilly bin starting to fill up!

Under the boat, there were 3 Kingfish about 1 metre long lurking to see what we were hauling up.  "Kingies" are rocket-propelled predators and their speed has to be seen to be believed.  They can also weigh more than 50kg!  They're smart fish too - they'll take bait dropped in the water but they're very wary about anything with a line attached - live baiting is the normal method of catching them.  Great eating but they're so powerful that normal gear gets smashed up or at very least, a snapped line.  During a moments' inattention last year, one hauled my rod and reel out of the boat - bye bye $$$$$$!

The photo below shows the metre-long kingies coming up to investigate some bait I dropped on the surface. 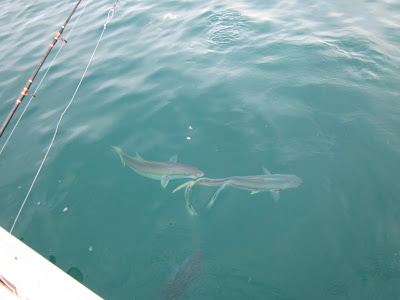 Great eating but hard to land!

Towards the end of the trip, Jennie landed an undersized Trevally, dropped it back in and that's when we got a heck of a fright and exhilaration all rolled into one.  As soon as it hit the surface, there was a colossal explosion of water right next to the boat as the biggest two kingfish we've ever seen came after it from the depths.  We were just frozen at the power and speed of these monsters and didn't have time to take a photo but this file photo has one of comparable size.  What a privilege to see something like these in their element!

Sunday saw me departing before dawn for another round of assessing IAM Associates against the advanced riding criteria in Auckland.  There's some strong current interest from female riders which is great.  Wonder if the average male rider thinks he's got nothing to learn?  I'm inclined to think that testosterone plays a bigger obstruction to learning than we might imagine! 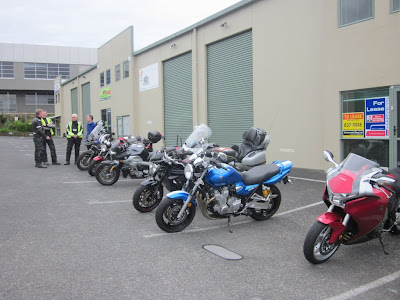 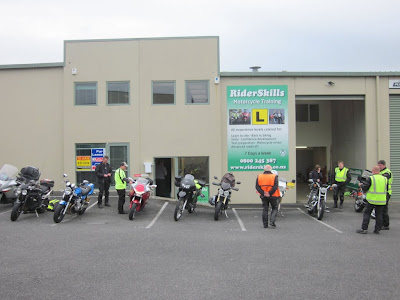 More bikes of all shapes and sizes

Anyway, I got to assess a rider who's skills had plateaued for a while and was pretty sympathetic as we all go through that process.  However, he'd put in a whole lot more practice with an IAM mentor and his overall skill level had measurably increased over all aspects which delighted us all - the system works!!!  I also had an extremely accomplished Observer assessing me and after the ride was finished, he took me and another trainee Observer for a short training ride to demonstrate some advanced observing skills and how to plan and control the ride.  The learning in that half hour was immense and served to reinforce that whilst I might be riding at an advanced level, I have a heck of a way to go to become an accomplished Observer!!  That's the great thing about continuous learning compared with a one-off course - you become painfully aware of how much there is to learn.  Teaches humility when you see just how good some of these guys are!!!

On the 180 km trip home, I called in to refuel about 60 km short of home.  On re-starting the bike, there was a yellow warning light on the dashboard which wouldn't go out - momentary panic about getting stranded as the Coromandel coast road is a lonely place on a late Sunday afternoon on the edge of winter!  It wasn't oil or temperature but the engine management system and I fretted that it might be electrics.  However, we made it home with no problems and a lot of relief.  Straight onto the internet, praying that I wasn't going to have to fork out BIG $$$ for repairs!  From what I've been able to deduce, some Triumphs are sensitive to over-filling the fuel tank which I know happened because I wasn't paying attention and splashed it everywhere!  Apparently, over-filling can trigger a sensor alarm in the engine management system which ALLEGEDLY disappears after 3 cold starts and warming the engine to normal operating temperatures.  Because the bike has to start from stone cold, I've only managed one today, with 2 more scheduled for tomorrow.  Fingers crossed that's all it is.  The internet is a truly wondrous place - how ever would we have coped with problems like this a few years ago?

So now I have 3 weeks on my own to do stuff and eat stuff that I wouldn't normally get permission for.  Small chance, Jennie will have spies everywhere :-).

Addendum:
Yayyy!!!  The "fix" for the engine management light actually worked, despite slight skepticism on my part.  Amazing!