Tankslappers, top boxes and the trembles

Now please bear with me as it's a bit of a detective story!

It started with an email from Andy who in addition to his wicked Triumph Daytona 675, bought a BMW800 GS in more recent times. No embarrassment to Andy intended (he's an extremely accomplished rider by the way) and the full details won't be publicly disclosed but he dropped his Beemer following a massive tankslapper at open highway speeds on a public sealed road.  Fortunately, the outcome could have been a lot worse than it was, although I'm sure that he didn't see it that way at the time.

What's a tankslapper?
At this stage, a few riders might be unsure with respect to what a tankslapper actually is so I'll elaborate.

One definition (source: Triumph Rat Forum - Tbirdnz)
The “tankslapper” is a very frightening experience. Usually occurring when accelerating hard over bumpy pavement, a tankslapper ensues when the front tyre becomes airborne, then regains traction outside the rear tyre’s alignment. The resulting deflection bounces the tyre off to one side, followed by another bounce in the opposite direction as it contacts the pavement again. Unless the bike’s steering geometry is able to damp out the deflections quickly, the resulting oscillations from the front tyre as it bounces back and forth will swiftly gain in strength, causing the bars to swap from side to side with increasing ferocity. The oscillations can be violent enough to rip the bars out of your hands, and fling your feet off the pegs. You can guess what happens next.

Here's a video of a tankslapping nightmare, source You Tube:

Tankslappers/headshakes are at the extreme end of a set of conditions which upset the stability of a bike.  They can be felt as a gentle weave at the other end of the scale and more often than not, there's little or no warning.

From personal experience, I don't think that the definition above quite covers the whole set of circumstances as it can occur under under deceleration too but it's pretty comprehensive - especially in terms of the first sentence and the last but one!

My first major tankslapper was on the Honda Blackbird, accelerating hard past a car towing a boat and trailer. During the passing manoeuvre, I hit a patch of bare tar, the rear tyre broke traction and next second, a tankslapper had started.  I had both time and presence of mind to open the throttle right up and it straightened up.  It rattled me but was over so quickly that there was no soiled underwear!

The second one was far worse and at much lower speed.  Again on the Blackbird, I'd accelerated away from a crossroads, not particularly hard and was still in a low gear when the tankslapper occurred.  This time it was so violent that all I could do was hang on loosely and not try and fight it, which might well have saved me.  When it had finished its shakes, I pulled over and got a dose of the shakes myself!  It was a really close call and I had a huge welt on one leg from a foot coming off the peg and the inside of my leg smacking the frame.

I never want a repeat of those experiences.  There is something which goes a long way to alleviating the problem and that's fitting a steering damper but let's do a bit more digging.....

Some further thoughts
Andy West's email has prompted a bit more musing.  Both incidents of mine occurred after I'd raised the rear ride height of the 'bird to quicken the steering.  It's pretty certain that a steeper or more sporting geometry raises the risk and is one significant reason why drag bikes have heavily raked steering.  The sharpened steering on the Blackbird may well have been one contributing factor and the fact that it's a heavy mother is another.  Once that mass starts swinging, it's like an oversized pendulum which is hard to stop.  As Andy's 800 GS has relatively conservative steering however, there might be other considerations too which predispose a bike to tankslappers or weaving at certain speeds and conditions.

It was another comment from Andy which caught my eye - he mentioned in passing that he had a top box fitted and he was riding solo.  Whilst I didn't have a top box hanging off the rear of the bike, I did have a high-mounted pack on both occasions - see picture below. 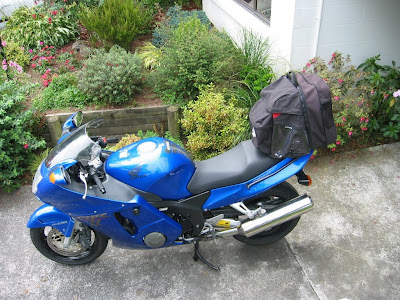 Whilst the Ventura zip-together pack shown above raises the centre of gravity and therefore lessens stability, it's saving grace is that it's reasonably aerodynamic and sits well forward.  Contrast this with the BMW below where the top box is both high and aft of the rear axle 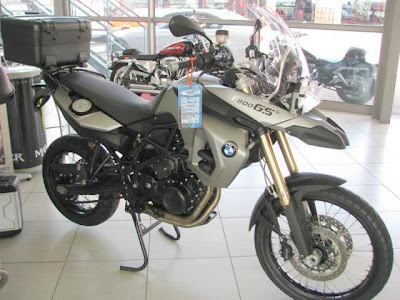 You don't need to be a physicist to appreciate that a load high up and well to the rear of the bike will shift the centre of effort aft (and upwards).  Now add the effect of wind pressure at speed on the top box and the dynamic centre of effort will move even further aft potentially causing stability problems.  Of course, the severity will heavily depend upon the type of bike you ride - suspension travel, level of wind deflection, weight distribution and so on plus the speed you're travelling at and maybe even wind direction.  Bikes ridden two-up appear to be less affected, probably due in part to mass centralisation and also shielding the top box from an unstable slipstream.

When I had my two incidents, I searched the international Blackbird internet forums and found quite a few cases of everything from an alarming weave through to a full tankslapper, almost always with top boxes being used.  Mentioning this to Roger yesterday, he was pretty certain that he'd seen similar reports for other bikes.  I've just jumped on the 'net to check for myself and yep, there are plenty of cases there for all manner of bikes!

So there you are.... if you didn't know about the potential for weaving or tankslappers before, particularly with top boxes; you do now and that's half the battle.  You also know that a steering damper will help enormously, at least in mitigating the more violent effects.  Let's hope you never have one as it's a truly terrifying and dangerous experience!!!

Addendum:
Regular readers will remember that it was an email from eminent motorcycle journalist David Hough that set me on the path to raise my riding skills with IAM and we've stayed in touch.  David's knowledge of motorcycling in general and safe riding in particular is legendary.  I floated the subject of tankslappers past him and as always, got a comprehensive and enlightening response.  Here's what David had to say:


Geoff,
Tankslappers are a reality. Dynamically speaking, the front end wants to balance itself (drag on the tire off-center steers the front wheel to the side--which countersteers itself back the other way, restoring balance) but outside forces can interfere. For example, if the tire loses traction momentarily and then regains traction, and the wheel isn't pointed exactly in the direction of the bike, tire traction attempts to steer back into a (more or less) straight line. But there's a risk the tire gains traction so quickly it over-centers, then reacts by steering back the other way, etc. etc. In time it should self correct, but a rider tends to panic and attempt to force the bars to settle down. Problem: the front end left-right frequency is typically faster than a human can respond to, and the rider imparts steering pressure in the wrong direction.
Momentary loss of traction (or reduction in traction) can also occur when the front suspension can't react quickly enough for a dip, bump, or groove. A painted line can be slippery in the rain. A dip can hold grease. A groove can momentarily steer the tire. Loose wheel bearings or swing arm bearings can encourage oscillation. The rider imparts a sudden steering input (say when recovering from a lane change) Wind drag on luggage or fairing can cause instability as turbulence pushes side-to-side. It's worth noting that the California Highway Patrol required special radio box mounts on their former Kawasaki bikes. The radio box (on the back of the machine) had sliders to allow it to move around laterally without imparting undesirable forces to the back of the bike.
In the scenario of a rider passing another vehicle on wet pavement at speed, I'm not amazed a tank slapper occurred.
Attempts to hold the bars steady rarely do anything other than to accentuate the wobble. Changing speed can change the bike's reaction. For example, applying the rear brake, or rolling on the throttle can help. But the speed change needs to be quick, before the bars are oscillating at a frequency that makes it difficult to hold on.
DLH