What do old farts know about riding motorcycles? 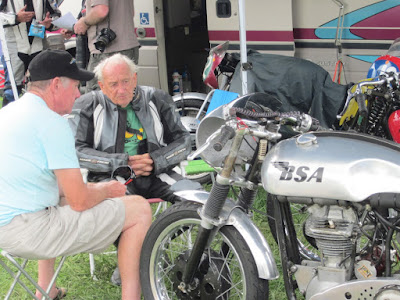 Old body, the enthusiasm of a 20 year old, but with more skill and cunning!
Regular readers will remember the Feburary posts about strategies for ageing riders to continue riding for as long as possible, and earlier posts about skill training.  The ageing rider posts were prompted by  my discussions with David Hough, a world-renowned motorcycle author, particularly in the area of safety and skills.

Coming back from holiday, there was another email from David covering a few more points about ageing and also mentioning some difficulties with mentoring/skill transfer across generations.  I've reproduced it verbatim below as it was one of the most succinct and cogent pieces of writing I've seen for a long while.  See what you think.


Hi Geoff,
I'm in the process of reading a book, Healthy Aging, by Andrew Weil, M.D. Of course, he's talking about humans in general, not motorcyclists, but what he says strikes a chord. Feel free to share this.
One reason why younger people dislike thinking about aging--or even looking at older people--is that it's a reminder of our own mortality. We all know that none of us get out of this alive, but we don't want to rush the issue. Young people tend to do focus on the excitement of the day, taking chances that seem to offer something. Younger motorcyclists seem to find aggressive riding attractive, and measure other riders by their speed. Of course, getting to the Rock Store--or the Puhoi Pub--first is mostly a matter of taking greater risks rather than having greater skill. Adrenaline can be addictive.
I remember a Canadian rider who was known to be "fearless." He would go by other riders so fast they were instantly demoralized. I once asked him about his fast and risky riding. He replied, "If I'm going to crash, I want it to be fatal. I don't want to have a piddling crash that just puts me in the hospital for a while." Of course, that was when he was about 40. Later he married and had a child, and his attitude changed dramatically.
But I suspect that many riders have a similar attitude when young. We don't want to go out stumbling and drooling, we'd rather go out in a blaze of glory. Sorry, but that's not realistic. Well, OK, it's realistic for a huge number of young riders who snuff themselves out prematurely due to failure of skill and lack of situational awareness. But most of us just continue to ride and grow older. Everything grows older, including our homes and our motorcycles.
My point here is that I think motorcyclists prefer to just not think about the aging process. We don't want to have to think about being old until we get there. "I'll cross that bridge when I come to it." But what we do in our youth and middle age has a direct bearing on how it's going to go when we "get to the bridge." For example, the person who takes up smoking as a teenager finds it difficult to quit once the damage become apparent. Then as the smoker grows older, the exposure to nicotine vapor may result in uncomfortable and messy physical problems.
In his book "Healthy Aging," Dr. Andrew Weil notes that we can't extend life. There is no "fountain of youth." Our bodies eventually reach the point where they fail, and we die. But Weil suggests that life is much more enjoyable if we take steps to stay as healthy as possible for more of the years we have left. The idea is to have a long, healthy life, and fail quickly, rather than degrade slowly. It's not unlike my Canadian friend's attitude, but it's stretched out over many more years. Weil has lots of suggestions about diet, supplements, and exercise, of course. If you want more about that, I could oblige.
Some cultures value and admire older people, just as we tend to admire antique bikes, vintage wine, and aged whiskey. Revering old people is particularly common in some oriental cultures, especially Okinawan. There is some recognition that the elderly have something worthwhile to offer, which also gives younger people something to look forward to. I suspect that in our "western" cultures some younger motorcyclists might be interested in old bikes, but seldom revere older riders. I continue to do riding skills seminars, but I often get the feeling that many in my audiences are mentally weighing how much advice an old guy could offer, even after a million or so miles of experience. "Things are different today. What could you possibly offer?" But offering knowledge to younger people helps me feel useful, and of course feeling needed has a lot to do with mental health. So, I'm continuing to write and lead seminars, whether my audience is respectful, or not.
Years ago I was invited to do some skills seminars at a rally. At the appointed time there was a small group of riders--perhaps a dozen--who were willing to listen to what I had to say. We were gathered around a picnic table, but there were other tables around us occupied by riders who were obviously not interested. As I talked, riders at an adjacent table began talking and laughing loudly. This wasn't just impoliteness. It was a message that "we're not interested in some steenkin' old fart telling us how to ride."
I don't hold any grudge against those less interested riders. They are like the rain. There is no point in cursing the rain when it falls, or shouting for it to stop. It is what it is. If you want to avoid getting wet, wear waterproofs--or stay inside. If you want to control noise, make a point of getting an inside room, or at least a separate area. Or, arrange for a sound system that will override even the most annoying hangers-on.
I don't know how our respect of elders might be increased among motorcyclists. But I suggest for those of us who are motorcycling veterans, offering to teach, or writing, not only has a potential benefit to younger riders, but also helps us maintain our health longer. I've been in situations where my advice was not wanted or valued. Of course, I have the experience of years. I continue to do seminars. And over the years the younger, brasher, less interested riders have gradually drifted away. There are now more riders who can participate in a respectful dialogue.
David L. Hough

...... and with writing like that, it's clear why David has earned the huge respect that he has among the motorcycling community.