This post is principally directed at esteemed blogger Bobscoot, but also at other scooter enthusiasts.  It is, in fact, an apology for taking so long to discover the joys of riding a scooter!

Let's go back to July 2009.  For much of Mr and Mrs James' near-38 years of married life, we've had a tradition of taking turns to arrange anything between a weekend and 2 weeks away to celebrate our wedding anniversary.  The rules of engagement are that the destination has to be kept a secret from the other party for as long as absolutely possible.  Lies, false trails and any other subterfuge are considered fair play for this event.  Fortunately, we have a good friend who is a travel agent and has long been a willing co-conspirator to all this. This is not without stress you understand, particularly when it's my turn to organise things. Mrs. James, in keeping with female traditions everywhere on the planet always wants to dress "appropriately".  That is to say, she doesn't want to pack a range of flimsy tops, shorts and sandals only to arrive at Scott Base in Antarctica.  My evasive techniques have come close to being too successful on occasions and 4 years ago, she threatened to stab me in the eye with a pen she was holding if I didn't come clean.

However, I digress.  Last year, the planning fell to Jennie and when we left home in the car on a mystery route, my suitcase carried a range of clothing (boy scout motto: be prepared) and we eventually ended up at Auckland International Airport.  She finally revealed the destination as the tropical South Pacific island of Rarotonga.  Whilst waiting for the plane, she handed over the travel pack for perusal. I looked no further after noting that part of the package included the use of a scooter for our stay!!!  I started riding motorcycles in 1963 and in all that time, had never ridden a scooter.

On checking in at our accommodation, we were told that before the scooter could be ridden, a local driving license had to be procured, so it was down to the main police station early in the morning to get one.  I flashed my NZ motorcycle license, produced NZ$25 and within 5 minutes had my Cook Islands driving license.  Behind me in the queue was an American with the same intention but was unable to prove that he had a motorcycle licence.  Trying to intimidate the woman behind the desk with "Goddam, I've ridden Harleys all my life and my say-so ought to be enough" was not a smart move. He was promptly sent to the back of another signposted (and lengthy) queue for non-licence holders to take a test which involved riding a scooter in a circle at the back of the police station for all of 30 seconds (at presumably additional cost).  He'd failed to grasp that licensing was not a test of competence or a challenge to his masculinity, it was simply a significant income stream for the island. Politeness may have seen another result entirely. 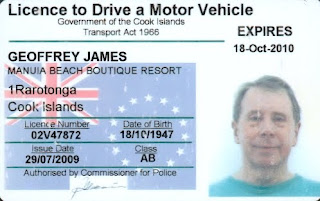 Motorcycle riding laws in Rarotonga are delightful.  The island speed limit is 50km/hr.  Some laws were passed a few years back making helmets compulsory but this was amended to no helmets being required below 40km/hr.  The reason for this unlikely legislation?  Pressure from Rarotongan women, that's what!  "Big Hair" is the prevalent fashion and they were outraged at the idea of getting "helmet hair" so a face-saving compromise was reached.  In practice of course, the legislation was unenforceable so everyone continues along helmet-less at whatever speed they choose.  Oh to have the power of those women on our policy makers!

Back at the resort, Jennie and I leapt on the black Yamaha Cygnus 125 automatic that had been allocated to us and promptly leapt off again as the seat temperature due to the sun was close to that of molten lead and we were wearing shorts.  Probably provides continuous amusement to the girls running Reception.  Wheel it into the shade for a few minutes whilst the intricacies of getting it started were explored and eventually, getting back on and heading into town.  A few nervous wobbles with the little wheels up the resort driveway which consisted of crushed shell and then out onto the main road to town.

My safety helmet was a baseball cap turned backwards.  It's well-known that a cap turned backwards bestows magical powers of invulnerability on spotty youth all over the world but my reason was far more pragmatic - with it facing forward, the darned thing blew off within a few feet and was run over by following traffic.  Here's a photo of me and the scoot down at Avarua harbour in full safety gear.... cap on backwards, chick magnet sunglasses, tee shirt and shorts.  As someone who pretty much wears full protective gear including gloves at home to even nip down to the local shops, I was surprised how relaxed I was on the island without all that gear.  Everyone is so chilled-out and courteous that the most likely risk of harm is through a coconut landing on your head.  I did draw the line at riding in flip-flops though having seen what even a minor spill can do to toes. Not possessing the ultimate fashion accessory of pink Crocs, our Asics walking shoes were pressed into service. 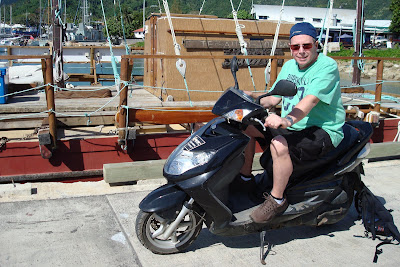 The Cygnus was an absolute delight and the perfect choice of vehicle to become acquainted with the island's sights and smells.  The island circumference is about 32 km and no matter how many times we circumnavigated it, it hardly seemed to use any fuel.  Scooters must be the ultimate local commuter vehicle.  The underseat space was cavernous for holding food, trinkets and fallen coconuts procured during the many circumnavigations.  It would have been used earlier if I'd actually been able to find the means to lift the seat in a timely manner.  Nothing more embarrassing than an epic fail on an unfamiliar machine! 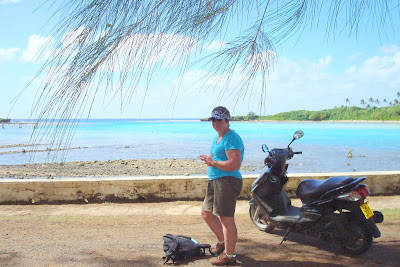 As confidence grew in the Cygnus, some spirited riding was attempted but stability seemed to decline a bit and besides; the speed governor on the back delivering the odd blow to the side of the head was a powerful disincentive, so laid-back cruising soon resumed.  The only tricky moment was riding 2-up through soft sand to reach the deserted beach in the photo below.  There was no risk of physical harm, just a blow to dignity if we decked it.  All turned out well though. 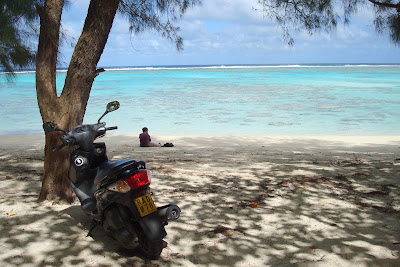 So my one and only scooter experience in a long motorcycling career turned out to be a magnificent one and I can see what the attraction is to the legions of scooter owners throughout the world.  Before I finish though, I've add a couple of photos of another bike we chanced upon outside Avarua shopping centre - the Sachs Madass.  Have never seen one of these before and they're really funky - projector headlights, upswept exhaust - a honey of a bike.  No storage space but a great machine to ride, I'll bet. 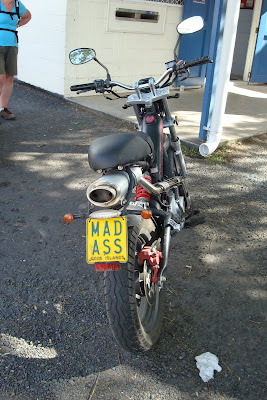 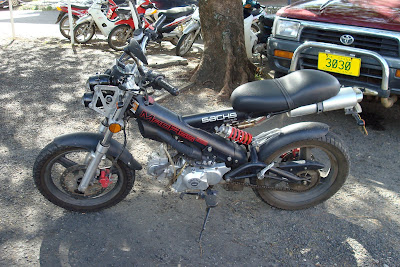