This post is an appropriate sequel to the last one about the Tricati and what might have been.

After emigrating to NZ, there was another "special" which did occasionally get to run on the road in the late 1980's and 90's, albeit highly illegally. One of my direct reports at work was a remarkably resourceful ex-UK Special Air Service sergeant who seemed be able to lay his hands on anything at a moments' notice. Among the things which came into his possession was a single cylinder racing Yamaha 50 motor with boxes of spares and go-faster goodies.  He was somewhat vague about its provenance but the layer of dust on the boxes suggested that ownership had long ago shifted to the "possession is 9/10ths of the law" category. This thought might have been uncharitable on my part but knowing him.....

Anyway, Len asked me whether I'd like it and whilst it was manifestly unsuitable as a road-going special power plant, it might be just the thing for a "bucket racer", especially as I had two sons who may have been keen to have a go if the hurdle of permission from their mother could be negotiated.  Bucket racers are cheap entry-level race bikes for raw beginners or those who want to have low cost fun.

Len ran the well-equipped apprentice training school on our manufacturing site and once a few second-hand bits such as front forks, wheels and swingarm had been obtained, the training school equipment was pressed into service to make a frame and other cycle parts.  The frame shown in the photo below was bolted construction whilst we played with the configuration, although it would eventually be welded. 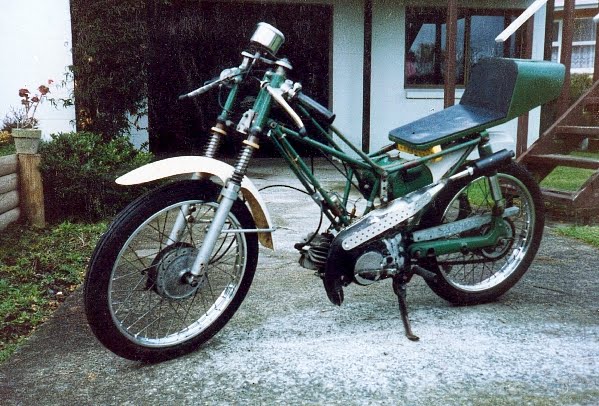 The eagle-eyed amongst us will have spotted a cable running from the front hub and crossing the frame down tubes above the engine.  This is further testament to Len's amazing skills and was in fact, a mechanically- linked brake anti-dive system which actually worked!  Fuel was supplied from a small tank just above the rear of the engine so the principles of mass centralisation combined with a low C of G were alive and well even then.

The apprentice training school was in a highly visible location on site and although most people including the CEO were aware (and highly appreciative) of  Len's ummmm... unconventional ways, it was decided to fire it up at our house for the first time.  This was because the euphemistic term "silencer" was actually a racing expansion chamber with no noise control whatsoever.  For those who have never heard an unsilenced racing 2 stroke at close range, it's quite an experience.  The occupants of our street certainly thought so, together with small furry animals of a nervous disposition and even normally phlegmatic farm animals just down the road.  Len immediately saw that the James family reputation and well-being in the district might be under threat and briskly manufactured a stinger that unsurprisingly resembled a covert weapon suppressor which presumably, he was previously well-acquainted with.  On the next-fire-up, the bike was still noisy, but it had lost the frequency that made your teeth ache.

Len was a big guy so the first test ride shakedown was all mine.  As the bike was road legal only in the sense that it had 2 wheels and working brakes, it was fortunate that we only lived a few hundred metres from a largely deserted country road.  Nonetheless, the noise was still quite a head-turner and I was glad when the confines of town were left behind.  By any standards, there wasn't much torque but it still accelerated cleanly through the gears and the exhaust note was the stuff of erotic dreams!  After the ride, the conclusion was that it was a quick little beast and handled pretty well for something in the early stages of development.  Looking at the photo, a silver object can just be seen on the headstock between the fork stanchions.  This is a simple, but effective steering damper!  It consists of a curved plate attached to the bottom yoke, backed with a flexible asbestos pad which can be tightened against the headstock.  Quite innovative really and another of Len's ideas.

A few more sneaky rides out of town were undertaken and it was a delight to ride but let's face it, anything with the smell of hot 2 stroke oil is great.  However, dreams of getting it onto the local track were fast diminishing as the kids were showing more interest in soccer and rugby and to be honest, most of the enjoyment was gained from building it.  My height might have been passable, but there was no way it would perform at the track with lardy me on it so it got parked in the shed with a tarpaulin over it for a year or two until it was given to a work colleague with similar thoughts for his kids.  Same result, but at least we all had a lot of fun!

As a poignant postscript, Len passed away peacefully in his favourite armchair at home a few short years ago.  A lovely way to pass, given his earlier profession. His technical and motivational skills were legendary and his funeral showed the huge esteem in which he was held, including ex-apprentices coming back from overseas for the occasion and even representation by the NZ SAS; but that's another story.....  A colourful and giant of a man in every sense and in these days when conformity seems to be accepted as a virtue, Len was a wonderful antidote to both conformity and mediocrity.  I don't use the word lightly but it was an utter privilege to have known him and to have counted him as a friend.
Posted by Geoff James at 09:49