After a wet weekend and no riding for 3 weeks because of more pressing priorities, Monday dawns fine and warm.  Too good to miss a ride, even if there are things to do later in the day.  An early breakfast and a 200 km trip round the Coromandel Peninsula Loop would be a perfect wake-up!  If you'd like to come for a ride, throw a helmet on and hop on the back for a guided tour........

First port of call ('scuse the pun) is to have a look at the Kia Toa fishing boat down in Coromandel Town which is shortly to undergo restoration.  She has quite a bit of history. It may look like an old hulk but she's clearly a magnificent sea boat as it regularly used to motor up the 6000-odd km to Mururoa Atoll in the Pacific to protest against the French holding nuclear tests there.  Must be a tough old girl with her double-planked wooden hull! 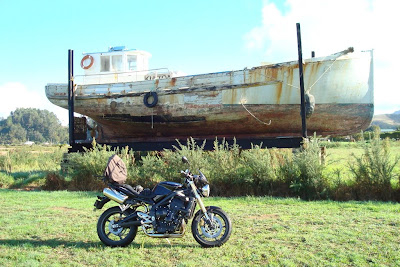 Heading south toward Thames, the next stop is at a lookout in the hills that affords a 180 degree view of the Firth of Thames.  The first photo is looking north to Manaia Harbour, the second is looking directly down to a sheep and beef farm with its own bay and launch ramp (cows and sheep are bred with one pair of short legs to compensate for the hilly terrain) and the third is looking south across the Firth through the misty conditions to the many commercial mussel beds. 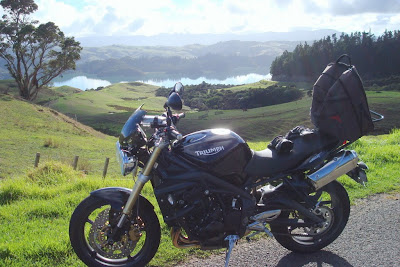 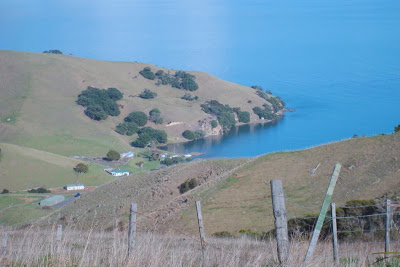 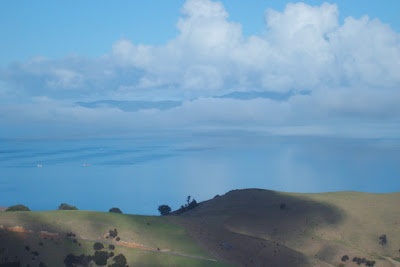 A slowish jaunt along the waters' edge towards Thames as I feel a bit rusty.  The sea is like a mill pond, just stunning. Pulling up just north of Thames shows the old weatherboard holiday homes by the water.  These are called bach's in the north island - short for bachelor pads.  The second photo is of a newly-restored old hotel in Thames which is now a private dwelling.  There was a proliferation of such watering-holes in the 1800's to satisfy the considerable thirst of the gold miners in the area! 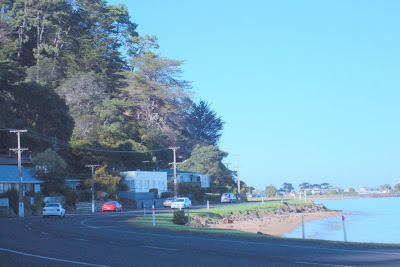 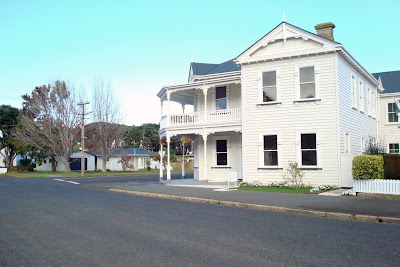 After Thames, it's out into the hills on the Kopu to Hikuai road which runs from west to east across the Peninsula.  Through steep hills with a mixture of sweepers and twisties - a biker's delight.  However, no high speed antics this morning on account of wet roads and probably slippery too in shady parts thanks to a massive thunderstorm in this area last night.

Leaving the wet hills behind and heading north up the dry east coast, a comfort stop in Tairua is necessary - perhaps too much coffee for breakfast!  The photo taken during the stop is across Tairua Harbour to the extinct volcano called Paku.  At least, we hope it's extinct as there are a lot of homes on it now! 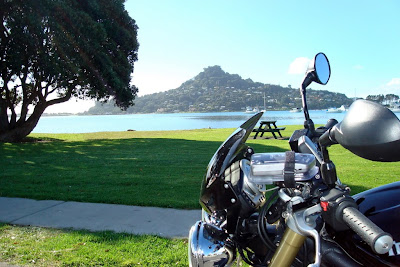 Continuing north through the twisties at a good clip with hardly another vehicle in sight, the stomach starts rumbling in anticipation of a scallop burger at the Coroglen Tavern.  The scallop burgers are a sight to behold, all the normal trimmings but packed with local scallops shown a buttery hot pan for a few scant seconds - just divine! This place is packed with bikers at the weekend but on a Monday, where is everyone?  Working presumably but heck, I've miscalculated the time and they don't open for 20 minutes - oh nooooo....! 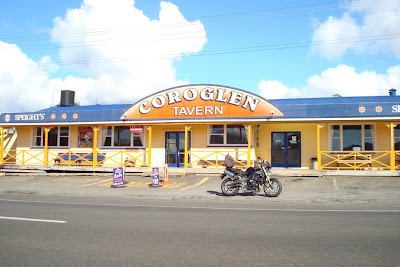 Despite the strong pull of a scallop burger, I'm hungry and can't wait that long for a feed so it's back on the bike for the short(ish) ride north to Whitianga.  There are lots of good eateries here which would please even the most discerning palate (blogger and foodie Bobscoot to mention just one).  Sadly, a leisurely "slow food" experience isn't an option today as I have an afternoon appointment so to be safe, a relatively quick stop at Subway is made.  It's down the dining scale a bit but healthy and nutritious, not to mention easy on the wallet.

Feeling refreshed, it's a reasonably rapid journey over the section of the Coromandel Loop of which the Triple knows every centimetre, back to Coromandel Town.  Half way back, a quick double-take and photo from the saddle of some creatures in a field which look like they've come from a Stephen King novel, perhaps the Langoliers - can you guess what they are? No prizes for the sheep in the background, but the other two? 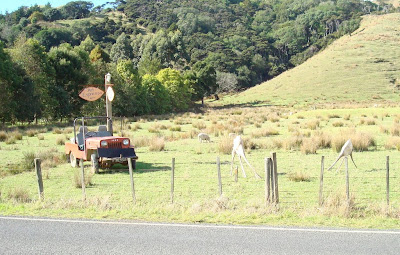 They're actually made from the lower part of palm leaves (the NZ Nikau palm) where they attach to the trunk - really clever but nightmarish if you've had a drop too much to drink!

Back in Coromandel Town, The king tide 2 days previously has brought some interesting boats down the creek nearly into the town centre so a quick stop is made to see what's about . The vessel shown in the photo is Sirius, a local all-alloy crayfish (rock lobster) boat which has probably been slipped for its annual marine survey.  Looks pretty big against the Striple! 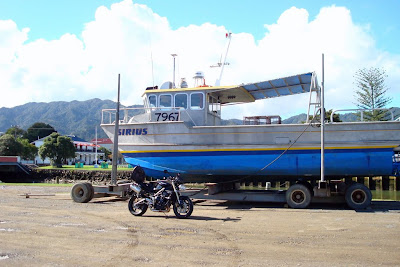 All in all, a wonderful way to start any day - must do more of it and hope you enjoyed the quick trip round the Coromandel Loop.
Posted by Geoff James at 12:37