This isn't about  motorcycles but I feel compelled to post it as a salutatory warning to my Canadian blogging friends if they have any intention of coming to New Zealand (Sonja, you are mercifully excluded for reasons which will become obvious).  We don't have any snakes and only one poisonous spider, the Katipo.  It's so rare that very few Kiwis have even seen one and whilst it's poisonous, it's not deadly. It's a distant cousin of the Redback. 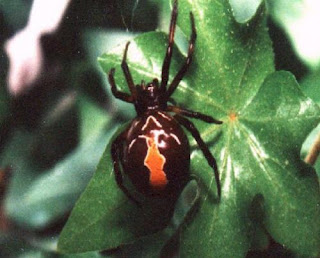 On an NZ internet news site not half an hour ago, the following report appeared.

A venomous katipo spider bite on his penis was the high price a tourist paid for a skinny-dip at a Northland beach.
The 22-year-old Canadian left his clothes in the sand dunes while he went for his nude swim and slept on his return, according to a report on the case in today's online NZ Medical Journal.
"He woke to find his penis swollen and painful with a red mark on the shaft suggestive of a bite. He rapidly developed generalised muscle pains, fever, headache, photophobia [light sensitivity] and vomiting," wrote Dr Nigel Harrison and colleagues who treated him at Dargaville and Whangarei hospitals.
By the time the man reached Dargaville Hospital, his penis was severely swollen, his blood pressure was up and his heart beat racing.
Chest pain and other symptoms developed the next morning and it was presumed he had been bitten by a katipo. He was treated with anti-venom medicine and rapidly improved.
However, heart problems persisted and he was treated at Whangarei Hospital and Auckland Hospital before returning to Canada.
Katipo spiders are known to have a highly specialised habitat in New Zealand sand dunes and will bite only rarely, and in defence.
This was the first known case of myocarditis, or heart inflammation, caused by a bite, Dr Harrison said.
A prompt diagnosis and the use of anti-venom resulted in a good outcome for the tourist, he said.


I am more concerned for the sanity of a Canadian who wants to go skinny dipping in the ocean on the edge of winter in NZ.  I know it's Northland, but this is hardly equivalent to Hawaii.  With the Pacific North West having just emerged from a cold winter, I'm inclined to think that the victim was from this region, thinking how tropical it is by comparison.  I'm sure this isn't a regional trait and perhaps we have an example of Darwinism at work.

Nonetheless, if you see a fellow motorcyclist who is wearing ultra-baggy trousers and walking with a stoop, perhaps you'd like to offer him some sympathy before you turn away and snigger.