And now for something completely different..... (With a nod to Monty Python)

Hadn't done any model-making since my teens but about 15 years ago, the kids bought me a Tamiya Ducati 900ss plastic kit for Father's Day.  Just the thing for a winters' night so went out and bought some brushes, paints and cement.  Now, if anything is going to show up eyesight problems as the years go by, it's plastic models with a million microscopic parts. Dexterity was also an issue and it felt like bunches of bananas were attached to my wrists rather than fingers.  Whilst the challenge of putting the Ducati together was quite enjoyable, concentration span was an issue so a limit of one hour per occasion was about right to avoid loss of temper.  Being a pedantic engineer, the exhaust pipes were given a bit of colour too.  Here's the result (click to enlarge): 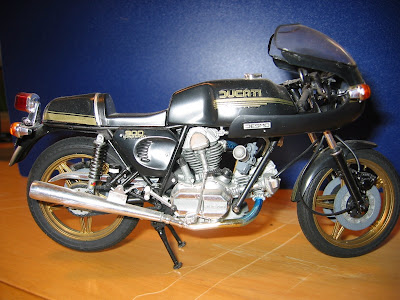 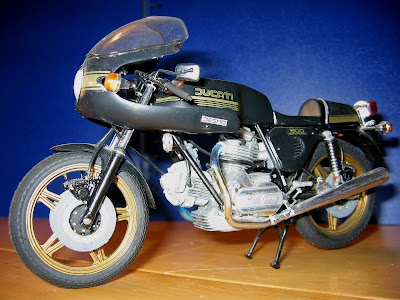 Whilst the outcome was reasonably pleasing, there was no intention to do any more model construction but as is the way of things, in 2001, fate stepped in.  Back then, I owned a BMW K100RS but had just bought a Honda Blackbird.  A workmate was wanting to get back into bikes and made an offer for the Beemer which was duly accepted.  When he came round to pick it up, bless his good heart; he gave me a Tamiya K100 kit to keep the memory alive! It was a naked K100, not the faired RS as there was no RS kit available but it was a lovely, generous gesture so building started again.  This is how it ended up: 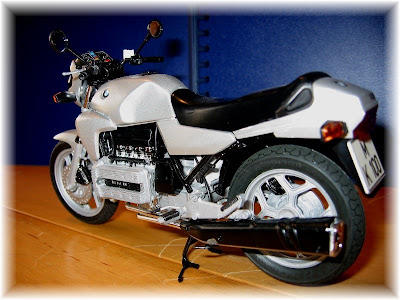 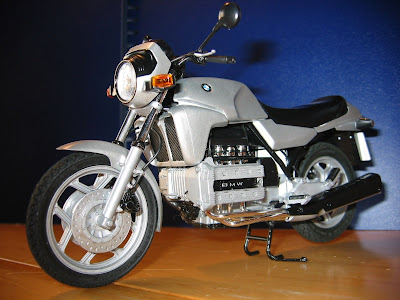 Getting eye strain at the dining room table for nights on end was hard going and there was no intention of building another model in the foreseeable future.  However, eating my own words seems to be a speciality and when a Tamiya model Blackbird caught my eye, how could it be resisted?

The temptation to be pedantic again reared its head as the kit was an early carburetted Blackbird and mine (the real one, that is) was injected. Now, train-spotters, obsessive-compulsives and other anoraks (an English term for sad bastards like me who need to get a life) will recognise the dilemma.  The ram air intakes in the fairing of the kit had mesh in them and the injected real bike had vertical bars.  Consequently, I started rummaging through boxes of bits in the workshop to see if there was anything which could be adapted to make it look like an injected version.  Here's where a slight miscalculation was made by mentioning to Jennie what I was up to.  Her reply was laced with words that I hadn't heard her use before so it was a fair pointer that some sort of invisible line had been crossed.  Oops, mesh grilles they'd stay, and there was no way that I was going to add fuel to the fire by mentioning that  there was a small difference in the tail light between the earlier and later models which was originally going to be addressed too!!!

Although plans to build an exact replica of my bike were now clearly in tatters, there was nothing to stop a paint job to match it, so some Tamiya translucent blue was procured, along with silver metallic base coat.  Buying an airbrush for just one model would have seen me sucking hospital food through a straw so the plan was to apply multiple coats (7 from memory) of highly thinned blue over the silver base.  It worked out pretty well too as you'll see from the pictures below.  Oh, and I did adorn it with my own numberplate as a silent act of geeky defiance!  Construction and painting was such a difficult process that it nearly got hurled against the wall on several occasions and there's little likelihood of another one being built - EVER! Even the rear shock and chain got painted - really obsessive!  We still have all 3 models but they remain packed in one of the many boxes that haven't been opened since we moved home a couple of years ago and there are absolutely no plans to add a Street Triple to them! 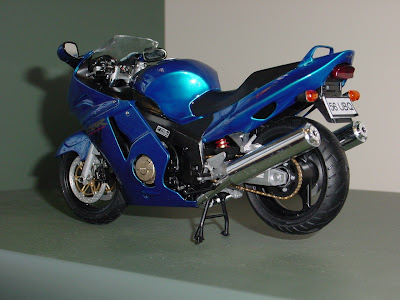 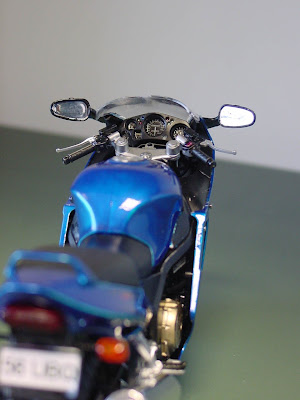 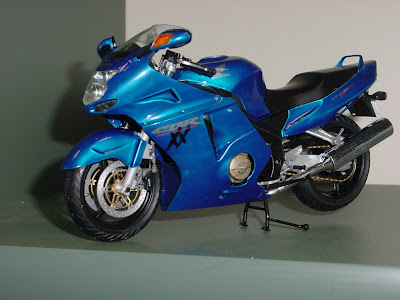