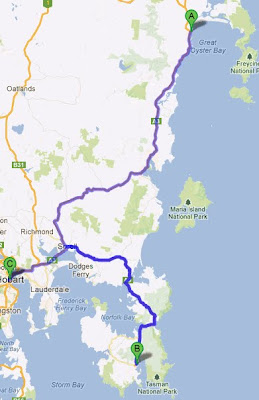 Leaving Swansea, we had another of those weird conversations in the car.  In NZ, the majority of private vehicle owners have towbars fitted for hauling trailers filled with garden waste, timber for home projects etc or almost inevitably for towing boats.  In Tassie, I noticed very few towbars and we had some amusing banter about the national characteristics of various countries.  Maybe we should have a towball on our national flag instead of the stars of the Southern Cross.  Jennie thought I was weird noticing things like that when we had all the beautiful scenery to look at.  Hard to argue with that comment, I s'pose.

Our next destination was Port Arthur, an ex-penal colony to which British criminals were sent in the 1800's.  On the way there, we had to pass through a region which had recently been devastated by a major bush fire in January.  The size of the burned areas were simply overwhelming and our hearts went out to the residents of Dunalley; many of whom lost homes, community resources and precious memories. 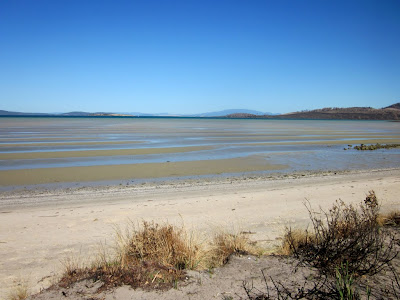 Many of the penal colony buildings, albeit in poor condition, still exist.  On the day we were there in bright sunshine and well-tended grounds, it was hard to picture what a terrible and harsh place it must have been when in use in the 1800's. 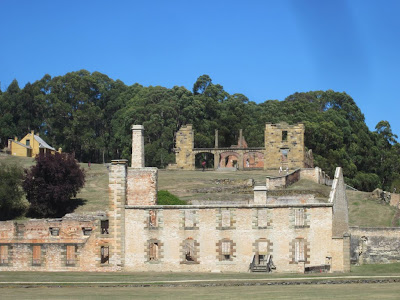 View of the penitentiary and other buildings 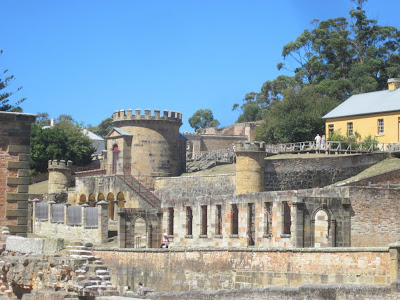 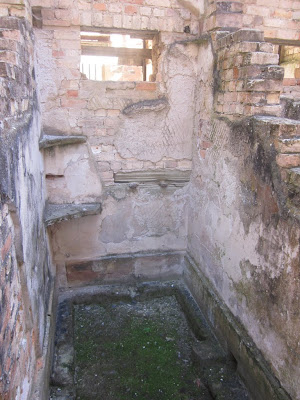 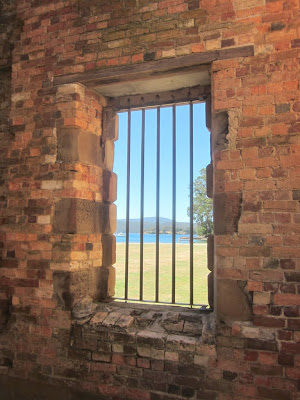 View from inside the penitentiary 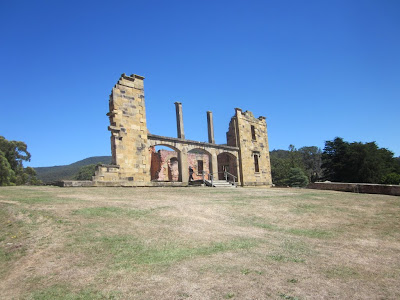 Remains of the prison hospital 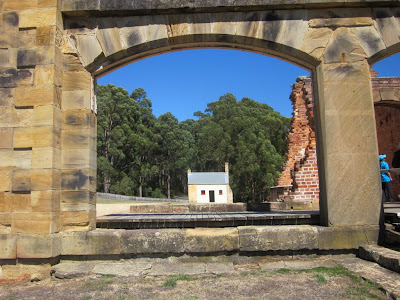 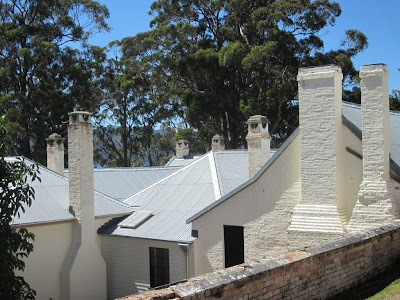 The prison Governor's substantial residence - a chimney for every room! 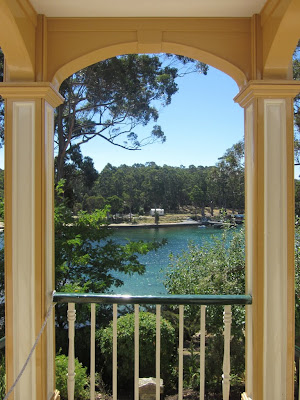 Stunning view of the harbour from the Governor's front porch

The final full day of our holiday saw a return to nearby Hobart.  First stop was to MONA - the Museum of Old and New Art. Built largely underground in a vineyard and privately funded by a wealthy Tasmanian, it's a real "must", if only to see the scale of the place and the innovative use of space and technology.  When we arrived, we were given a device much like an iPhone which sensed the proximity to an exhibit and gave you information on it, either in written format or aurally through headphones.  Not only that, but if you inputted your email address, it stored every item you'd viewed and then sent a link to each item to the email address so that you could see them again when you got home!  Here are some photos of a very small number of exhibits: 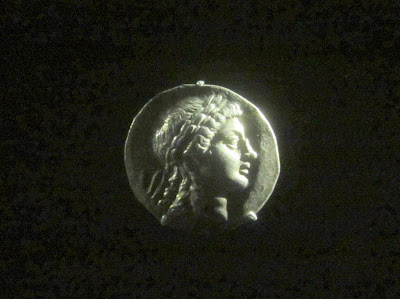 One of a horde of pre-Christian Greek coins - fantastically lit 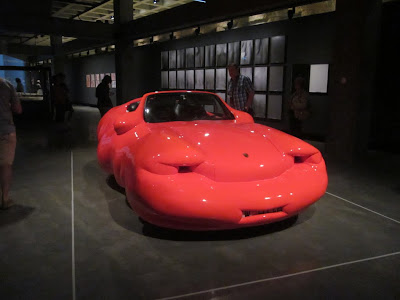 Fat Car - based on a Porsche Carrera rolling chassis 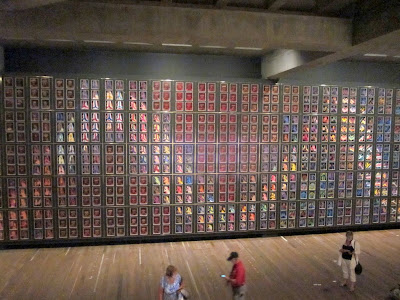 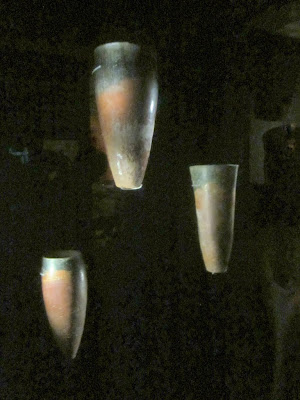 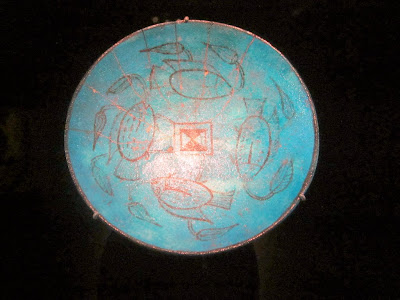 Egyptian pottery bowl, around 1500 BC

The final photo of the collection is a dynamic one!  There is a pipe carrying pressurised water with computer-timed jets along its length which squirt out Google's most-searched words!!  Incredible to see and hear it in operation!  The words are perhaps the best part of 2 metres high.  There's an excellent YouTube video HERE 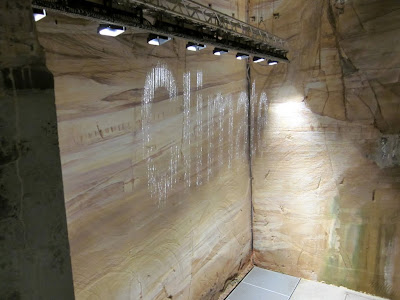 Being somewhat of an art philistine, many of the exhibits were way beyond my comprehension (and taste), but the place is a real tour de force and was one of the real highlights of our visit to Tasmania.

We could have spent all day at MONA but after a late lunch, decided to drive to the summit of Mt Wellington, which towers over 4000 ft above Hobart.  On a miserable day, it would be terrible up there but on this day, it was cloudless. 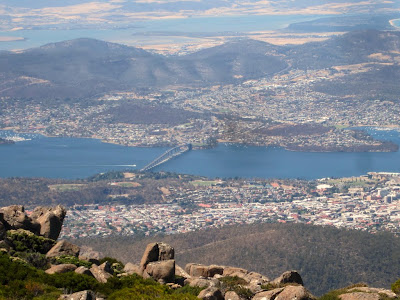 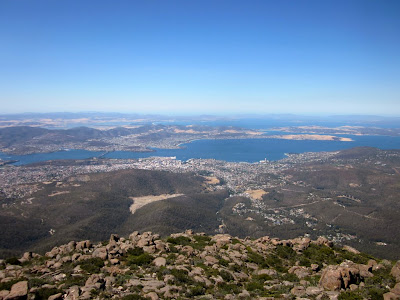 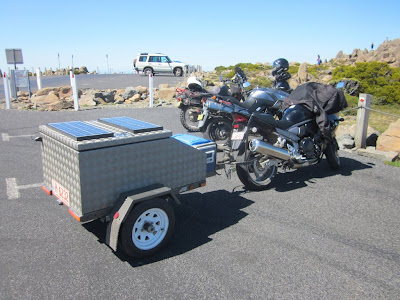 Top of the mountain - a Northern Territories bike and trailer
- complete with solar panels!

In the evening, we had dinner with a distant relative of mine and her family whom we'd not previously met.  Sue was descended from one of Britain's "deportees" to Australia.  Our ancestor had done his time and had apparently done rather well for himself after release. Sue and her family were absolutely delightful company and really hope that we can all meet up again in the future.  It was a fitting end to a wonderful holiday in Tasmania.

We've always enjoyed popping over the Ditch to Aussie and have had a great time wherever we've been.  As Australia has about 3/4 the area of the entire USA, you have to be quite deliberate in planning a trip or you can spend all your time travelling and not doing stuff.  Tasmania is small enough with sufficient variety in terms of scenery and things to do to allow you to get stuck in.  As a destination, it's a fantastic place to visit with people who go out of their way to make sure you enjoy it.

Hope you weren't terminally bored with all the posts!