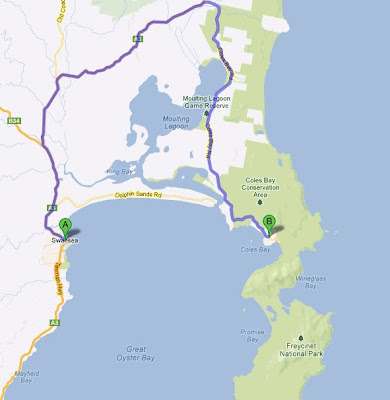 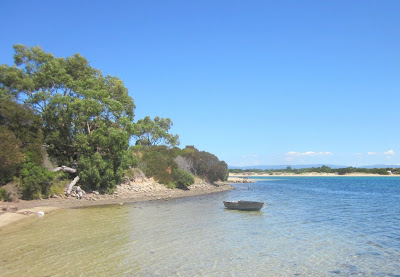 We'd programmed our GPS to find the accommodation which our totally trusted and ever-resourceful travel agent had found for us just outside Swansea.  All the documentation said was "Piermont" and gave an address. We were both surprised and curious when the GPS stopped us at the start of a private long gravel drive with the discreet words "Piermont Retreat" on a sign.  A few minutes later, we had the key to our own stone cottage and stood there with mouths open.  I might have said "bless me" or something a little less ecclesiastical.

There are 15 cottages in the bush close to the water and are designed to be environmentally friendly and totally compatible with their surroundings.  The shortest polite word is WOW! 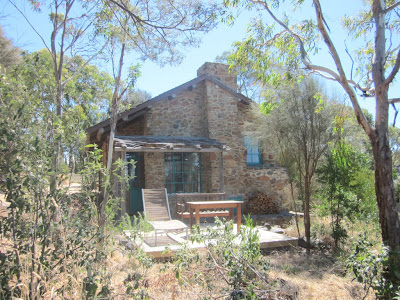 Front of cabin with deck looking over the bay

I think they were built by Dr Who as they seem much larger on the inside than the outside - a stone version of the TARDIS.  As soon as we opened the door, we saw the King-sized bed up on a raised dais at the back of the living area with uninterrupted views!  Here 'tis..... 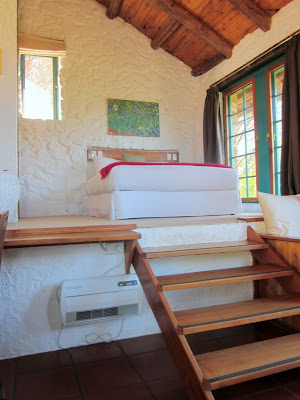 The next photo was taken from the raised dais looking down into the lounge.  A flat screen TV is in one of the recesses and a log fire is in the other. 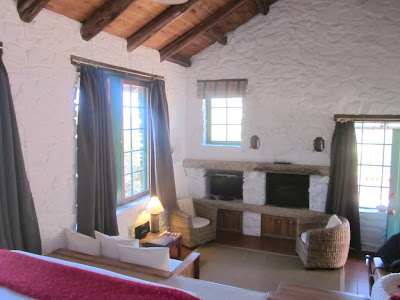 Could get used to this!

The bathroom and spa pool areas of the cottage were also exquisite but I'm sure you get the picture - tasteful and understated luxury.  Piermont also had their own cordon bleu standard restaurant for guests and casual visitors and we were very much looking forward to trying it.  We wandered over to the restaurant with one of us looking elegant and totally used to dining like this every evening back in NZ.  The other one, for the benefit of the foodie moto-bloggers who read these posts, had brought a camera to take a few shots.  Predictably, this did not go down terribly well, with stern words about letting the side down being hissed through clenched teeth by the classy member of the family.  Regular readers may remember a similar incident on our Thailand trip involving a chauffeur-driven Jaguar so clearly no lessons learned!

Consequently, only 3 semi-surreptitious photos were taken but maybe they'll give a reasonable idea of the dining experience. 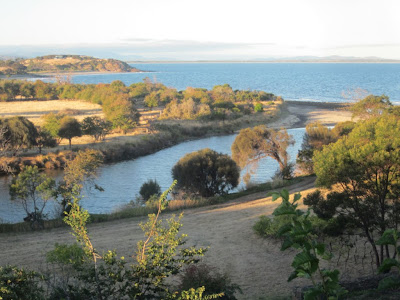 View from our table over Great Oyster Bay 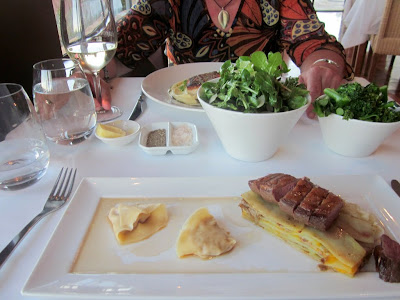 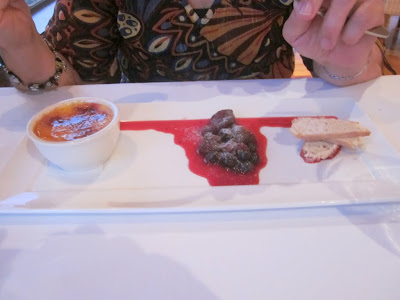 Mixed berries marinated in a liqueur sauce, creme brulee and home made biscotti ...

To cut a long story short, the food was made in heaven and with the setting, it was hard to think of a better way of spending an evening after a long drive. A great bottle of wine will be going to Julie, our travel agent for pulling this one out of the hat!  Not often that you get to stay in such a wonderful place.  Not glitzy and overblown, just simple and perfect understated elegance - a big well done to the owners. 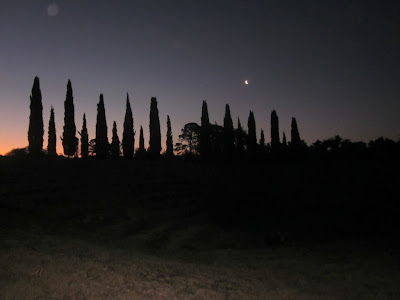 Nightfall as we walked back to our cottage 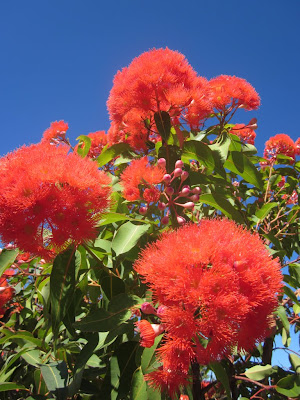 Flowering Eucalyptus in the grounds near our cottage

Early the next morning, we headed off to Coles Bay on the Freycinet Peninsula to go kayaking.  There was another couple plus Leith, the guide so everyone got plenty of individual attention.  We have a couple of sit-on smaller kayaks at home but the ones we were due to use were proper dual sea kayaks with spray skirts, rudders and plenty of storage for long journeys. 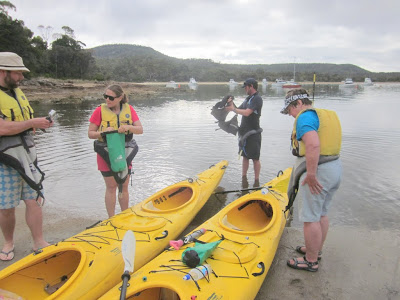 Preparing for the adventure

It's surprising just how far you can travel in 3 or 4 hours in a good kayak and we covered a fair distance exploring lots of beautiful bays in flat calm conditions.  At the half way stage, we pulled up in a deserted bay and Leith dragged out magnificent home-made cookies, coffee, tea and Milo - we were in heaven again!  I like the 2-seater kayaks, if the person at the back (me) is quiet about it, he can stop paddling and let the person at the front do all the work :-). 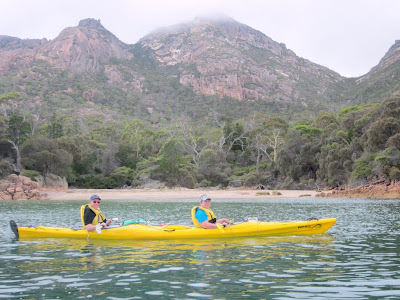 Aquatic Kiwis with Mounts Parsons and Amos in the background 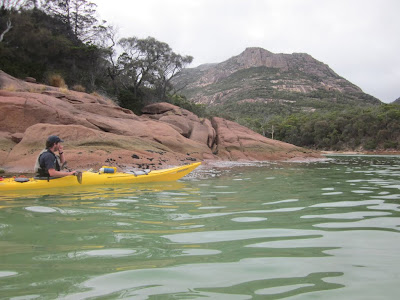 Leith paddling past an outcrop of pink granite


The pink granite was once prized for construction purposes and the remains of a crane used for loading ships can still be seen in the photo below. 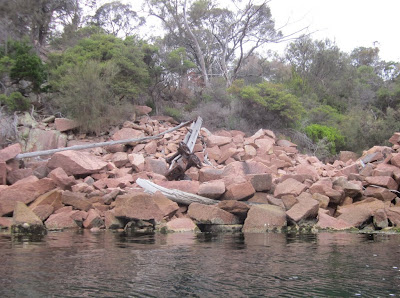 The word AWESOME must be one of the most over-used in the English language but it was totally appropriate for this trip.  Like the guides over at Strahan, Leith was a fine ambassador for both his state and country and it was his enthusiasm which was the icing on the cake.  It's also a small world as we discovered that when he was younger, he spent a couple of months as a counsellor at Camp Blue Star school camp facility in North Carolina.  Our youngest son was there as a counsellor at almost the same time after leaving university and making his way to Europe!

After a great day on the water, we headed back to Piermont to sample yet more of their culinary masterpieces!