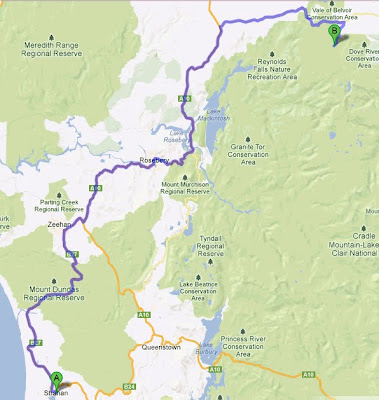 Back into the high country!

The next part of our journey was to take us north-east into the high country, still part of the World Heritage area.  Our first stop was in Zeehan to look at the Minerals Heritage Museum to see some of the minerals and mining-related equipment on display.  Two samples were particularly breathtaking.  I'd never heard of Crocoite which is composed of shards of crystals about the size of matchsticks. The overall size is about the same as a coconut and colour is bright crimson. 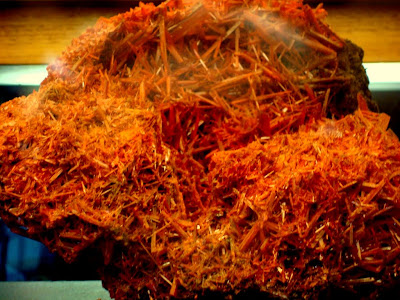 The previously unheard of Crocoite

Now most people will be familiar with the Australian opal when it's finished and set in jewellery but how many have seen it still encased in surrounding rock?  I hadn't but it's simply stunning.  Please forgive the photo quality, it was hard to do a decent job through protective glass. Size is about 3" long x 2' high. Must say I actually preferred it in this state to processed opals. 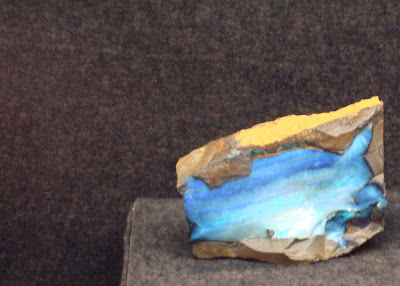 
We were also very taken with the old hand-cranked rail jigger shown in the photo below - perfect for holding races over 100 metres or so.  Any further and I'd be in cardiac arrest! 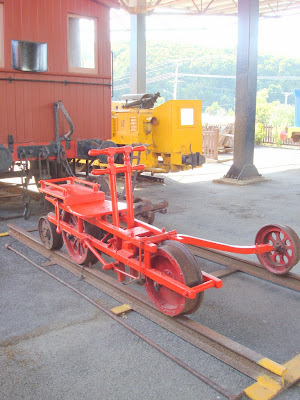 Continuing on our journey, we were staggered at the amount of nocturnal roadkill on this stretch of road.  Literally every couple of hundred metres, there would be an expired species of Wallaby, Wombat or the like.  Looking at it another way, it's probably a good indicator of the vast numbers of wild creatures in this part of the world!  Hitting something like a Bennett's Wallaby on a bike would have serious repercussions and even in a car, your insurance company is going to frown at the size of the claim.  One person we spoke to thought than roadkill numbers in this area had increased in rough proportion to the decline in numbers of the Tasmanian Devil carnivore but more on this creature further on in the post. 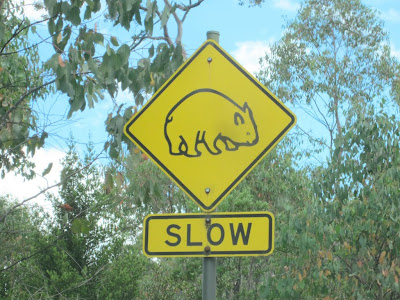 Wild Wombats waiting to leap out on unsuspecting motorcyclists 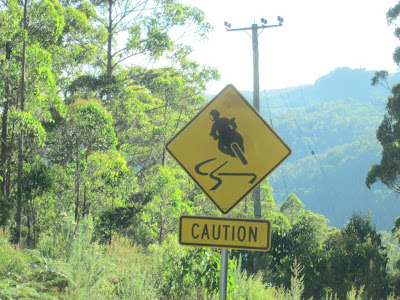 Wild motorcyclists about to leap out on unsuspecting car drivers

It was on this stretch of road that a conversation between Jennie and me took on a slightly bizarre note - a not uncommon occurrence.  On our journey round Tasmania, we'd noticed that major rivers seemed to be named after places or rivers where the state's forefathers came from (Derwent, Tamar etc from Scotland).  More modest rivers seemed to be named after politicians or other prominent people (Elizabeth River, Henty River etc).  Then at one bridge, we saw a sign saying "Black Bob's Rivulet" - wish we'd taken a photo.  One occupant of our car came to the probably erroneous conclusion that such a small trickle was named after the local village drunk who was noted for relieving himself in the street when the pub doors had shut!  I suppose, dear reader, that you thought the conversations in the car would be high-minded...... all about the environment we were travelling through and similar stuff. Sorry to say, but one occupant frequently let the side down to much rolling of the eyes and tut-tutting by the other party.

Arriving at our accommodation at Cradle mountain, we were delighted to find beautifully-appointed wooden cabins dotted around the bush - completely private and absolute heaven. 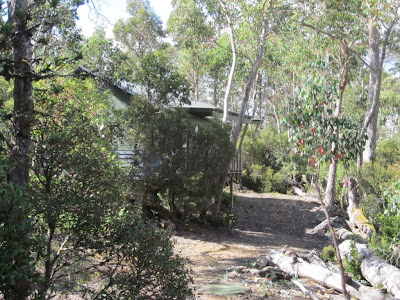 Unobtrusive cabin in the bush

First activity was to walk part way round the glacially-formed Dove Lake which sits in the shadow of Cradle mountain.  More sublime scenery although a wary eye was kept open after an information board said "all manner of wildlife, including the (venomous) Tiger snake"!  Fortunately, they'd probably detected us long before we saw them and scarpered. 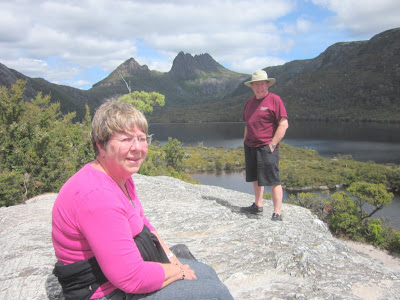 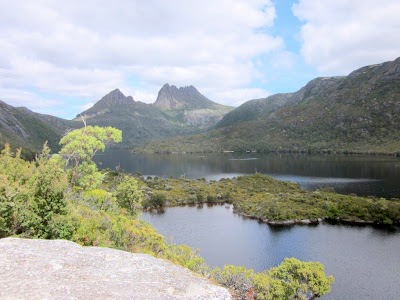 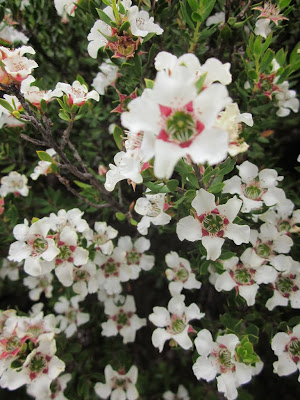 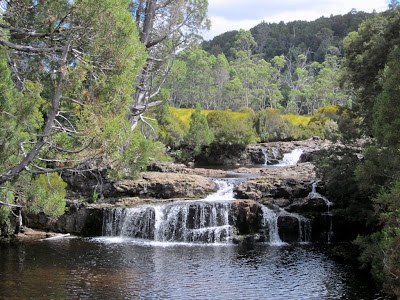 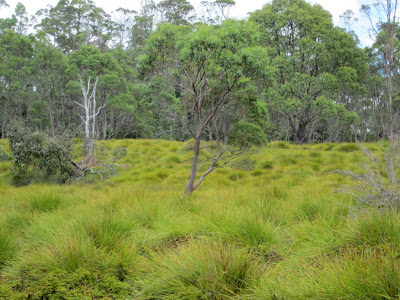 
After our bracing walk in rather hot conditions, we trotted off to a sanctuary which kept a small population of Tasmanian Devils which are the size of a terrier but all muscle. The Devils are top of the food chain carnivorous marsupials with an apparently massive bite pressure which will splinter bone but fortunately, pose minimal risk to humans.  That's a relief as the buggers can apparently climb trees, which is where I'd instinctively head if encountering one in the wild!  Much of their food supply these days is carrion, hence the earlier comments about roadkill although one of the national park staff had seen one bring down a live Wallaby with one bite.  Here's one in the sanctuary, with only a face that its mother could love. 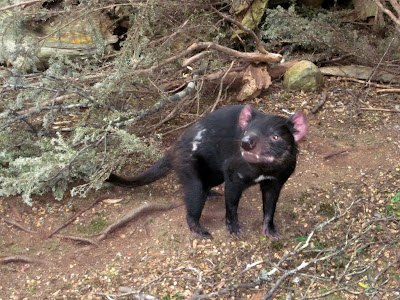 What big teeth you have, Grandma!

Despite earlier assurances about posing no threat, I was slightly nervous about the way it would disappear into the long grass of its big enclosure then magically reappear right next to us at the 1 metre high fence as we moved round.  If they really can scale trees, I'm sure they could figure out a fence if they got a mite peckish. 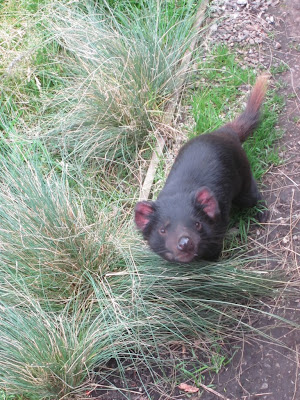 Come and pat me, I'm really friendly - honestly
Despite the foregoing levity, we liked them a lot.  The really sad thing is that wild colonies are in serious decline due to the spread of  facial cancers which were first seen in the late 1990's.  The cause is currently unknown and sanctuaries are a means of protecting them and breeding until progress is made.  Actually seeing a creature close up that is so threatened was quite an emotional experience.

Tasmania and the national parks in particular are teeming with wildlife and although you do see some during daytime, most of the animals come out at night to feed.  That night, we went out spotlighting to see what was about and were astounded to see just how many animals there were.  I'm not exaggerating when I say that every few tens of metres, we encountered different sorts of Wallabies, Wombats and Possums (but no Devils) - amazing!  Here are a few examples.  Not particularly good photos as the flash hasn't got much range. 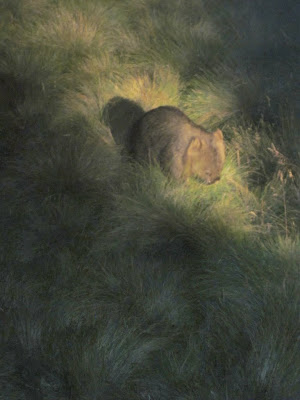 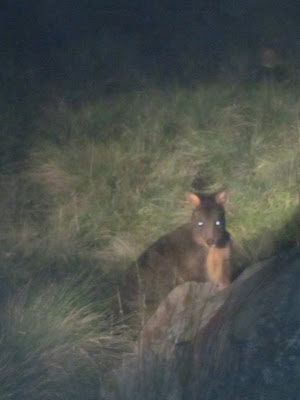 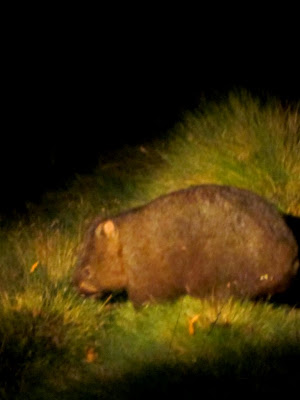 
We were surprised that all the animals were relatively unafraid of humankind.  I supposed they're used to seeing people wandering about and don't have adverse encounters with them.  We lay in bed that night listening to squeaks, snuffles and grunts all round our cabin and were exceedingly happy!

More of the adventure yet to come...
Posted by Geoff James at 11:04