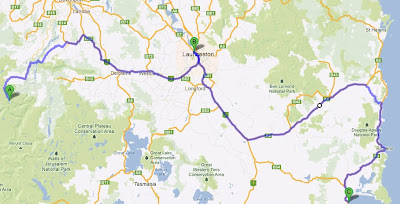 Over to the east coast

The main reason for this part of the journey was to get over to the east coast to the Freycinet Peninsula where we'd booked a sea kayaking trip.  Consequently, we had no real expectations about what to see or do en route but were pleasantly surprised.  Our eldest son had bought us a copy of Lonely Planet Tasmania before we left and what an excellent publication it turned out to be with all sorts of quirky information in it!

First stop was a family-owned cheese manufacturing business out in the countryside, Ashgrove Cheeses.  A beautiful looking place and we plundered the free samples, found some that we really loved and ended up buying a fair bit for munching en route.  We really liked their quirky style - tucked in a corner were some gumboots for entering the sterile conditions of the manufacturing facility hand-painted in pastoral scenes:

Not your everyday gumboots!

Outside, there were lots of plastic or concrete cows scattered all over the place painted in all sorts of different colour schemes - here's an example: 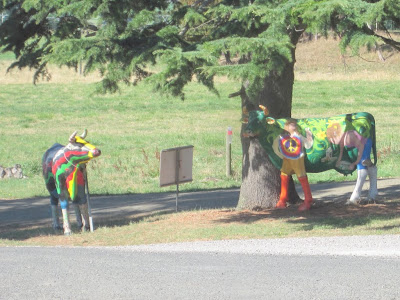 Psychedelic cows not mooving much (groan)

An overnight stop in Launceston had us heading for a wine-tasting session in the Tamar Valley.  A tough assignment, but someone has to do it. 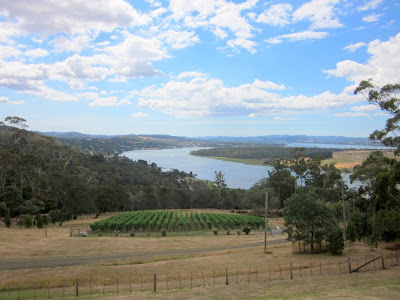 Heaps of boutique wineries in this region

As we headed further east towards the Esk Valley, it got progressively drier and hotter - easy to understand how scrub fires start and spread so quickly.

Miles and miles of not much - pretty impressive actually 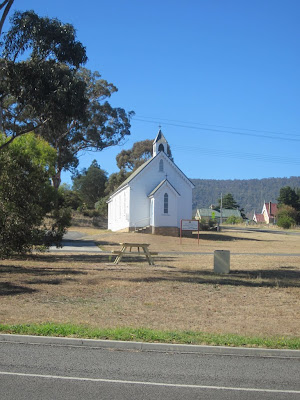 We saw an entry in Lonely Planet for a tiny cafe called the Purple Possum in the small settlement of St Mary's.  The entry raved about their home made rhubarb cake so it would have been rude not to stop and try some, wouldn't it?  The rhubarb cake was indeed outstanding and so was their iced coffee to wash it down!  The cafe also sold just about every bean known to mankind for sprouting and eating, all in big plastic tubs.  It was reminiscent of a small community near where we live which has an "alternative lifestyle" population and we wondered whether the same applied in the St Mary's area.  Not to be missed if you're ever in the area and the roads round it are motorcycling heaven! 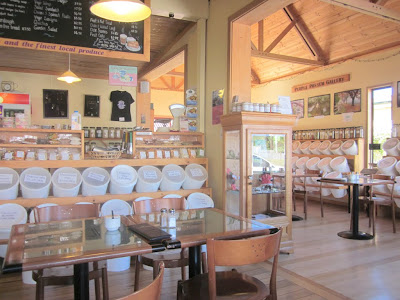 Inside the Purple Possum

I have a confession.......  the main reason we (ok, ok....  maybe not "we") chose the route through the Esk area rather than the more direct route to Swansea is because it took us through the small coastal settlement of Bicheno.  It's a lovely spot in its own right as the photo below will show.

The water really is this colour

However, I'd spotted a small entry in Lonely Planet (how good is this book???) that there was a motorcycle shop with a small bike museum attached in Bicheno and didn't want give my infinitely better half the chance to suggest bypassing it!  In the event, she sat outside and read a book which was fine by me!!  Wow, what a place!  The collection may have been small but heck, the quality of the exhibits was amazing!

The first exhibit to catch my attention was a Noriel 4, highly likely to be the only one in the world. 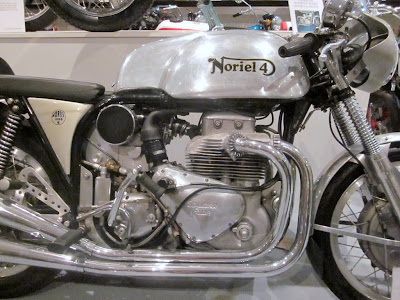 The only one in existence?

For the uninitiated, the Ariel Square 4 was designed in 1928 (yes, really!) by Edward Turner who is better known for his Triumph twins.  It was successively refined and in the 50's with 1000cc capacity, came out with a 4 port alloy head and was capable of a genuine 100 mph.  It ceased production in 1959.  This particular motor had a highly modified cylinder head plus other refinements and was shoehorned into a stretched Norton Featherbed frame. With its 4 individual mufflers (a loose use of the term), it looked a million dollars.  The owner said it handled pretty well but performance was fairly modest as you might expect from a vintage engine.  People who build stuff like this are national treasures! 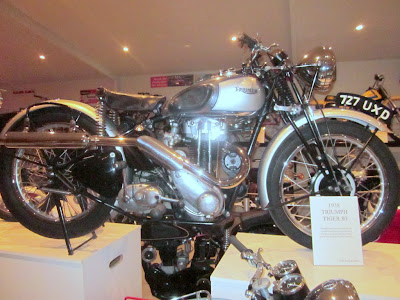 The next bike is also a rarity - a 1950 Triumph Grand Prix which saw considerable success on the race tracks of the world.  What's particularly interesting is that the engines were originally used to power generator sets on board British World War 2 bombers.  For the technically-minded, the two holes on the cylinder barrel located cooling ducting when used in the aircraft. Yeah, I know...... an anally-retentive Triumph nerd and proud of it.  Jennie would use another phrase entirely..... 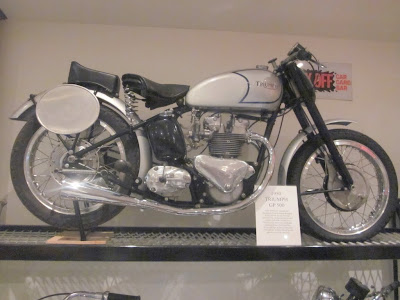 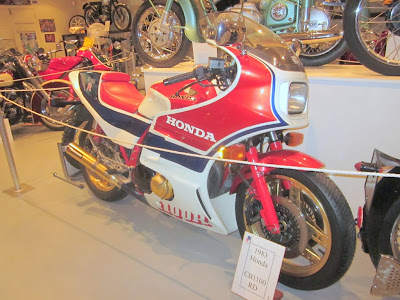 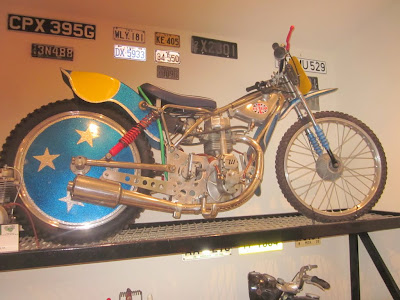 The final photo is of the Vincent 1000 motorcycle, one of the most famous bikes ever made (1933-1955).  I've chosen not to show the whole bike but one component which symbolises "The World's Fastest Motorcycle" advertising  at the time - the massive 150 mph speedometer! 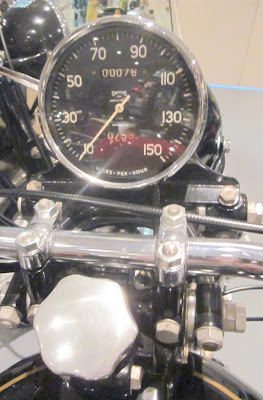 A clear statement of intent

Arriving at Swansea late afternoon in readiness for our sea kayaking adventure the following day produced another real surprise, but that can wait for the next post!