In the mid-late 60's, there was an article in the UK magazine, Motorcycle Mechanics, about a guy who shoehorned a 500cc Triumph twin unit construction motor into a 250cc Ducati rolling chassis, calling it a Tricati.  That article was subconsciously filed away in the back of the brain for future reference.

After giving up competitive drag racing in the early 70's (a combination of building a career and being financially strapped at the same time!), there was a hankering for building an exotic road bike based around my 350 cc Triumph drag motor (Drag Bike) and that article on the Tricati was remembered.

You may not have heard of the Ducati 200cc Elite as there weren't many about but in my humble opinion, it's still one of the most beautiful bikes ever made and the fuel tank shape is pure sex!  Here's a pristine example: 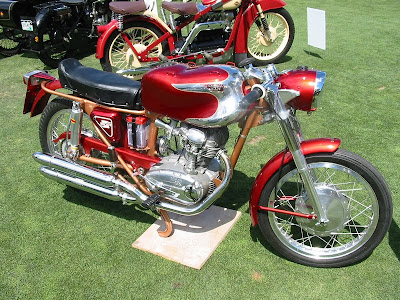 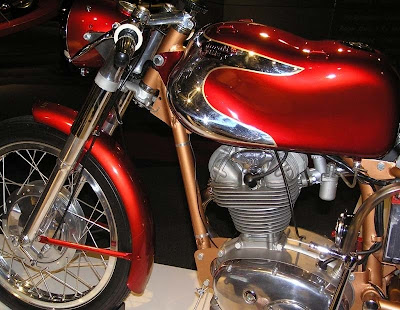 As it happened, a local bike repair shop had a Ducati Elite tucked away in the back of their workshop.  The motor had a cracked crankcase and heaven knows what state the internals were in.  I'm sure they thought I was insane for even enquiring about it but my interest was in the cycle parts and got the whole thing for next to nothing.

The first job was to see how difficult it was going to be to squeeze the 350cc Triumph twin into what was a pretty small chassis.  There was no intention to transfer the supercharger too, so there was adequate room for replacing it with twin carbs.  Clearance under the tank didn't look like an issue as the short-stroke motor was already lower than standard and it also looked shorter overall  than the original Ducati motor.  Some very crude engine plates and spacers were made and the motor pretty much went in first time. This photo is of the motor although the head was reversed back to standard configuration and the supercharger removed before the transfer. 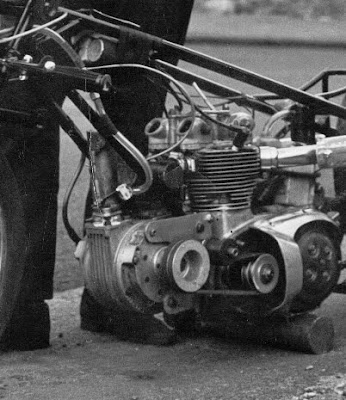 But aha, I hear the knowledgeable ones say, "The Ducati final drive is on the right and the Triumph is on the left".  Well spotted!  This wasn't much of an issue actually.  Inverting the swingarm and re-welding the suspension lugs on the other side was all that was required and the bonus was that the front and rear chain sprockets were almost perfectly in line.  Precision alignment could be achieved by carefully machined engine spacers.  With all that sorted, some engine plate patterns were sent to top drag racer Alf Hagon and back came some fantastic alloy plates with an engine-turned circular finish; simply magnificent.  Spacers were machined from stainless steel and the engine slotted in perfectly.

Next step was to sort out some of the cycle parts.  A half-fairing identical in style to the original Ducati 900ss was fitted and a single racing seat not unlike that on Cal Rayborn's racing XR TT Harley was made from polystyrene and glass fibre.  The intention was to manufacture high level pipes and mufflers like the factory 500cc Triumph Daytona racer shown in the last photo of this post: Nostalgia.  However, events were taking an unexpected turn.

Because of other commitments (including the minor issue of getting married and buying a house!) progress was slower than originally anticipated and construction activity virtually stalled.  At best guess, detailed finishing including a new wiring loom and painting would have taken perhaps 18 months working most weekends.  A further complication was that a good job offer working on the other side of the world in New Zealand was made - too good to turn down in fact.

It would be fair to say that the focus at that time wasn't on motorcycles, more on the upcoming new life and when an offer for the rolling chassis was made, it was accepted.  The drag engine was given to a friend I've lost touch with and for all I know, it might still be sitting in the back of his shed.  It was some 12 years after emigrating that an active interest in bikes was re-kindled: Getting back into it and memories of the Tricati also surfaced again.  Not one to have regrets about the past but I'll admit that with the benefit of hindsight, I was a complete plonker to sell as it wouldn't have taken up a lot of space in the container when we moved to NZ.  Also wish I'd had the foresight to take to take photos at different stages of construction just for the memories.


Ahhhh... what might have been! (But there is a happier sequel to special-building which will be the subject of the next post).

Update: For an amazing sequel, go to THIS post.
Posted by Geoff James at 09:59