Following on from the introduction to what the Grand Challenge involves (see Part 1  ), the following notes are some personal musings about preparation; not in any particular order of importance. Both age and the 7 years elapsed since last taking part in this painful  marathon suggests that it would be wise to do a little planning prior to the event!

Nutrition on the ride
On a couple of the early rides, I ate food that didn't really suit me, at least under those riding conditions.... gas station meat pies of dubious vintage, chocolate bars and caffeine-laden energy drinks . Felt slightly sick, wired and a made a few "close call" unscheduled comfort stops!  My personal preference is for a big bag of scroggin/trail mix, i.e. dried fruit and nuts which give a more linear energy release and you don't feel over-full. That's what I'll be sticking to this time unless any cravings intervene - I do like pies though!

Good hydration is essential for alertness and to keep cramp away.  For me, plain bottled water is sufficient or light sports drinks with any Red Bull or other concentrated caffeine drink strictly held over until the last checkpoint before finishing. Personally, pills are an absolute no-no; apart from the odd mild painkiller if absolutely necessary. 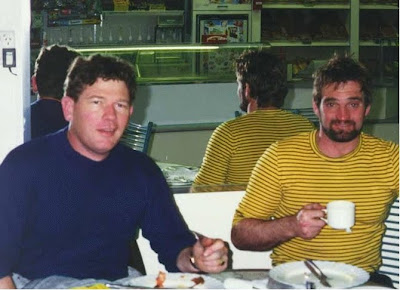 Clothing
This has been pretty much covered in the earlier post: Wet weather gear but staying warm and dry is essential for such a long distance.  I don't like feeling constricted with thick sweaters and the like, which is why the Icebreaker brand pure merino layer system under riding gear is the clothing of choice.  Just to add a note of levity, I will throw the word "underpants" into the ring!  Whilst trying to avoid this post descending into the gutter, it does have a serious side!  Without being too unseemly, briefs in the shape of minimalist swimwear drove me nuts on the first event.  When they weren't periodically climbing up between the buttocks, the raised seam on the leg cutaways seemed to be pressing right into the flesh and reducing circulation.  I tell you, these seemingly trivial things take on major significance on a long ride and the gymnastics attempting to rectify the problem whilst on the move defy description!  The problem was subsequently solved by riding in the sort of close-fitting stretchy boxers which good-looking young male athletes endorse on billboards and in magazines.  As I'm at the opposite end of the scale on all counts (apart from being a male), keeping quiet on the subject would be preferable but in the interests of comfort, it would be remiss not to reluctantly share the tip with any readers.  You may now snigger :-)

Oh yes... and helmets!  How is it that a helmet which is perfectly comfortable for "normal" riding can develop into something like Chinese Water Torture on long hauls?  I used a Vemar brand helmet on one ride which at around the 1000 km mark, pinched the tip of one ear.  It was really distracting and I almost attacked the lining with a knife.  Fortunately, common sense prevailed and a bit of strategically-placed duct tape solved the problem.  It ain't the big things which normally conspire against you, it's little things like this which can make or break the ride and its enjoyment!


Fitness
Physical and mental fitness both fall into this category. Ride fitness is probably a better description than physical and it definitely helps to have a longish ride or two not too long before the event proper to toughen wrists, backsides and numerous joints.  A practice night ride with your mates is also a smart move to dial in with each other and get mentally used to riding in the dark on unfamiliar, unlit roads.  (Covered in more detail on this previous post: Night riding ).  I'm carrying some old sports injuries to my knees which are becoming more of a problem these days so I'm progressively getting out on a mountain bike to build a bit more stamina whilst minimising joint stresses. This is my token gesture for building fitness apart from riding the Triumph over longer distances as the event draws closer!

Mental fitness is something I don't have any real experience of, apart from possibly questioning the sanity of anyone who enters this event.  However, the sheer distance can overwhelm some participants causing a withdrawal from the ride; normally in the early hours of the morning.  I reckon that it's more about mental toughness that either physical fitness or the type of bike you ride. We've always found it helps to treat the distance between checkpoints as separate rides and reset the mental horizon for each one.  I seem to suffer from anxiety in the small hours before dawn.  I'm not sure whether this is because the body clock is trying to shut down for sleep or what, but a cure has eluded me.  However, having good friends along definitely helps. Swapping the lead at gas refills if travelling in a group also helps with stress levels, allowing time to relax and recover if you're not up front.

Stretching, waving extremities about, standing on the footpegs, all whilst on the move helps a lot.  It also provides amusement for the following riders and probably alarms members of the general public.  A decent saddle is a major reducer of fatigue.  I had a custom one made for the Blackbird with varying density foams to eliminate pressure points and it was literally possible to ride all day without discomfort.  Other long distance regulars use sheepskins, large cell packaging bubble wrap taped to the seat and I'm tempted to experiment with this latter option on the Street Triple. An Airhawk inflatable pad is also on offer from a friend and this will be investigated in the coming weeks. 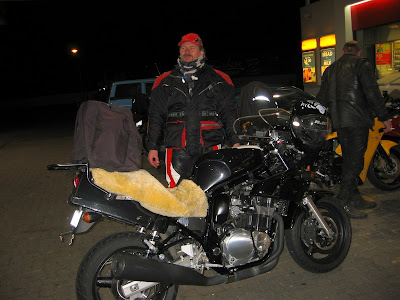 2003 competitor with sheepskin seat cover.  He also had a camelback for drinking whilst riding

Route planning and riding
With the organisers not disclosing the route until the riders actually arrive the previous evening or on the day of the event, there's little to be done except to transcribe the route onto a large scale map of the north island and discuss various aspects of the route with riding partners to pool any road knowledge (or to panic over some miserable goat track that we have to negotiate at 3 am!).  I've owned a GPS for a few years but have rarely used it on the bike so might give it a go this year, in addition to a back-up paper map which will never misbehave. As we have 3 riders in our group who haven't previously done the event, we'll have to be a bit careful about who leads at what stage.  After all, the purpose is to enjoy the event, not turn it into a nightmare for the first-timers.  Oh yes, and the organisers inspect your bike minutely for defects, even if it does possess a current warrant of fitness sticker. If there's anything even slightly dodgy, it has to be fixed or you don't ride!

Something we did for our first ever Grand Challenge was to make up a simple time/distance chart (see below).  It might seem like overkill but in the middle of the night when you're tired, hurting and under stress, performing mental arithmetic to figure out if you're on schedule takes a bit of nosedive. Looking at the actual time and actual distance covered, then seeing whether you're above or below the line on the chart was a simple means of assessing progress and although we haven't used it on subsequent rides, it might be of use to our newcomers, or if we encounter adverse conditions or any other form of delay.  Clearly the influence of an anal engineer, (who, me?) sigh.......

On the first ride, we stopped for 2 decent breaks for dinner and breakfast which was a mistake on our part.  Getting back on the bike after a good break was tough as we were starting to stiffen up and that affected the mental side of things too. On subsequent events, it was preferable to stop at a checkpoint to register arrival, check on each other, gas up, a quick bite to eat and drink, meet the needs of nature, do some stretches and get going again; all in the space of around 15 minutes.  Looking at it another way, you probably make 6 gas stops on the ride.  6 stops at 15 minutes is 1.5 hours of stationary time.  Adding another 2 + hours just for eating with questionable recovery benefits means that you have to go just that bit harder on the road with all the potential disadvantages and risks. On one previous ride, we covered the 1000 miles in a little under 19 hours but that was mainly resulting from uncharacteristically good weather and 3 experienced riders in phase with each other.  There was certainly no intent to do a fast time and there won't be this time either.
Going really hard is physically and mentally fatiguing, even with the benefit of a big screen or a fairing. Our personal preference is to cruise a "wee bit" above the legal speed limit which also reduces the risk of getting pinged for serious speeding and coming to a grinding halt whilst summary justice is administered.  Besides, I'm the only one with a radar detector and I'm definitely not going up front for the whole ride!  On a previous ride, two of the entrants spent an hour hiding behind some shops whilst evading the Highway Patrol for excessive speeds in the dark.  That's not a good position to get yourself into although we had a good laugh at their expense!

I previously lived only 160km from the start/finish of the Grand Challenge so I would ride from home directly to the event and then home again straight afterward, covering close to 2000 km in a touch over 24 hours. Now living about 350km away and 7 years older, it might be a smart idea to spend the 2 evenings either side of the event somewhere a bit closer! 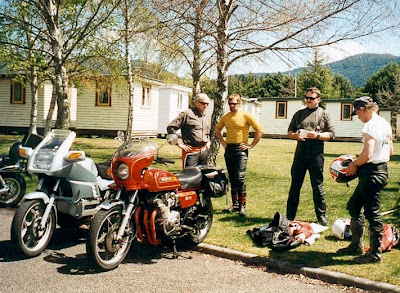 1997 - Minutes before departure and no smiling now!
Well, that's probably covered off all the basics.  All we need to do now is organise some decent rides in all weathers to start mental and physical conditioning without leaving it until the last minute!  More on this in future posts.....