Oh for a Lotto win!

The first part of this post is particularly for fellow moto-blogger Anthony from Australia who has the knack of finding some magnificent custom bikes which make me drool.  Well, I hope the ones I've found make a lot of people drool too.

I blundered across the Falcon Motorcycles website a few days ago.  Some of you might know all about this bike manufacturer.  I didn't, and as the page opened, all I could do was say:


"WOW, I WANT ONE!!"
It's rare for me to be smitten at first glance but this was one of those occasions.  I'm sure others will think that they're butt ugly and that's fine - vive la difference!!

Totally impractical other than riding to town and being admired (or gracing the lounge, but that's never going to be allowed to happen, is it???)

These bikes are a combination of pure art form meeting Mad Max and I don't know what else!  They actually manage to look slightly futuristic at the same time.  Based on an old rigid Triumph chassis with a heavily reworked pre-unit construction Triumph 650, the standard of detail is exquisite.

The people who design and build them are artists in all definitions of the word with every component of the bike complementing the part next to it.  The sum of the parts exceeds the whole by a wide margin.  Nothing left to say but I hope you enjoy the photos as much as I did!  Click to enlarge. 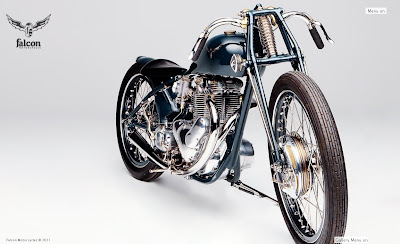 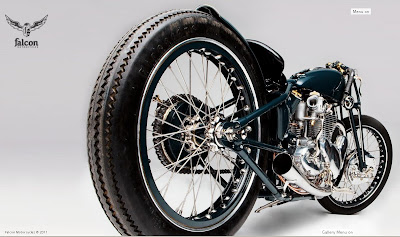 On a completely different tack, does anyone enjoy motorcycle racing games?  I found the free Superbike Nation on the internet and it's huge fun for filling in a few minutes when your mind goes blank in front of the keyboard!  Choose your bike and configuration and have a go at circuits round the world.  Get race points, upgrade your bike components and slowly become more competitive.   Be warned, it's ego-damaging for the first few  correction...lots of times but a lot of fun!  Just ignore the adverts for other games as it loads and wait for the configuration screen to appear.  Warning - when you've won the initial championship, the next level up is a  magnitude of difficulty greater.  Oh, and leaning over in your computer chair with your knee out is perfectly acceptable as long as your better half doesn't see you doing it ;-).

This is the last post for a while as Jennie and I are taking a break for much of March, travelling through Kuala Lumpur, Vietnam from north to south and home via Singapore.  Or, as one of my younger (and still working) riding partners put it, begrudging our retired status, "Taking a break from what, exactly?".  Not heading off just yet, but have a few other things to take care of.

Safe riding and we'll catch you later all being well!
Posted by Geoff James at 20:40