Getting the family in on it....

Our eldest son Lyndon was keen to learn to ride and had permission from his mother and a couple of off-roaders were purchased so that he could learn some handling skills in relative safety. A Suzuki TS100 was a perfect learning machine for him. The Yamaha IT 175 most certainly wasn't for me, with the bastard trying to kill me on every outing. The narrow power band was completely unsuitable for slower speed work in the forests around Tokoroa and muddy facials and large bruises were a common occurrence. "Mature" bodies definitely don't bounce as well as younger ones and my off-roading career didn't last all that long. 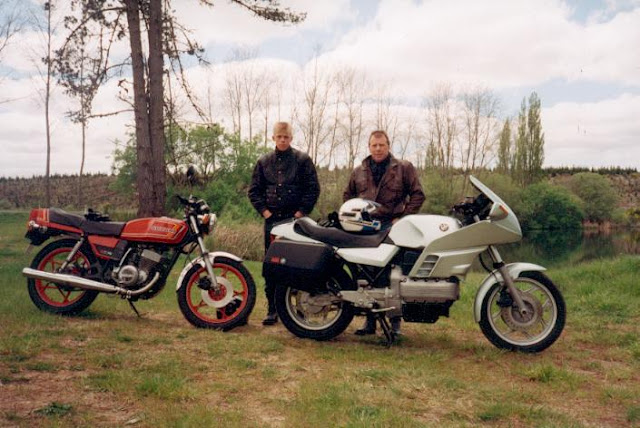 Lyndon with the Suzuki X7 and my K100RS

We managed to find a Suzuki X7 250cc 6 speed "screamer" in good condition for Lyndon to ride on the road and whilst it was well-mannered for normal riding, it could fair fly when thrashed further up the rev range. When Lyndon departed for university, the Suzook got a fair hiding at my hands round the Waikato back roads. Nothing quite like a 2 stroke for behaving badly on!

The GB 400 provided a happy partnership for a number of years but it was underpowered for 2-up riding and the road in Auckland that I bought the GB from entered the story again in 1993! A perusal of the bike shops in that road revealed a nice BMW K100RS complete with panniers. I wasn't contemplating getting anything this big but the price was right and it was in lovely condition. Learning to ride a big, heavy fast bike was quite a mission and it took about a year to push it along at speed with complete confidence. Countersteering was an absolute necessity with the old girl.  I was beginning to learn that big bikes requires large amounts of respect!